It was another quiet week here at the Library of Winkelman Abbey, which is a good thing, what with NaNoWriMo starting in a few days, and the ten thousand tasks which come with closing down a publishing company and publishing our last literary journal. Things are just busy.

On the left is the most recent issue of Poetry. On the right is Alexandra Erin’s Kickstarter-backed collection First Dates, Last Calls. I have not yet had time to do more than the briefest skims of each, but they both promise to be very good reads.

Speaking of reads, I am a little over a hundred pages into Black Leopard, Red Wolf, and still enjoying it immensely. It is a surprisingly easy read for all its length and the density of the prose. Given a few multi-hour blocks of reading time I could have it finished by Thanksgiving. Since I seriously doubt that will happen I have resigned myself to keeping at it until the end of the year.

I am almost done with Sasha Chacon’s Insides She Swallowed, and it is a really good collection. Seems that the people with the best words are the ones who actually have something to say. Who knew?

And that’s all I have for now. The next few weeks will likely be crazy busy so posts will be even more terse and infrequent. 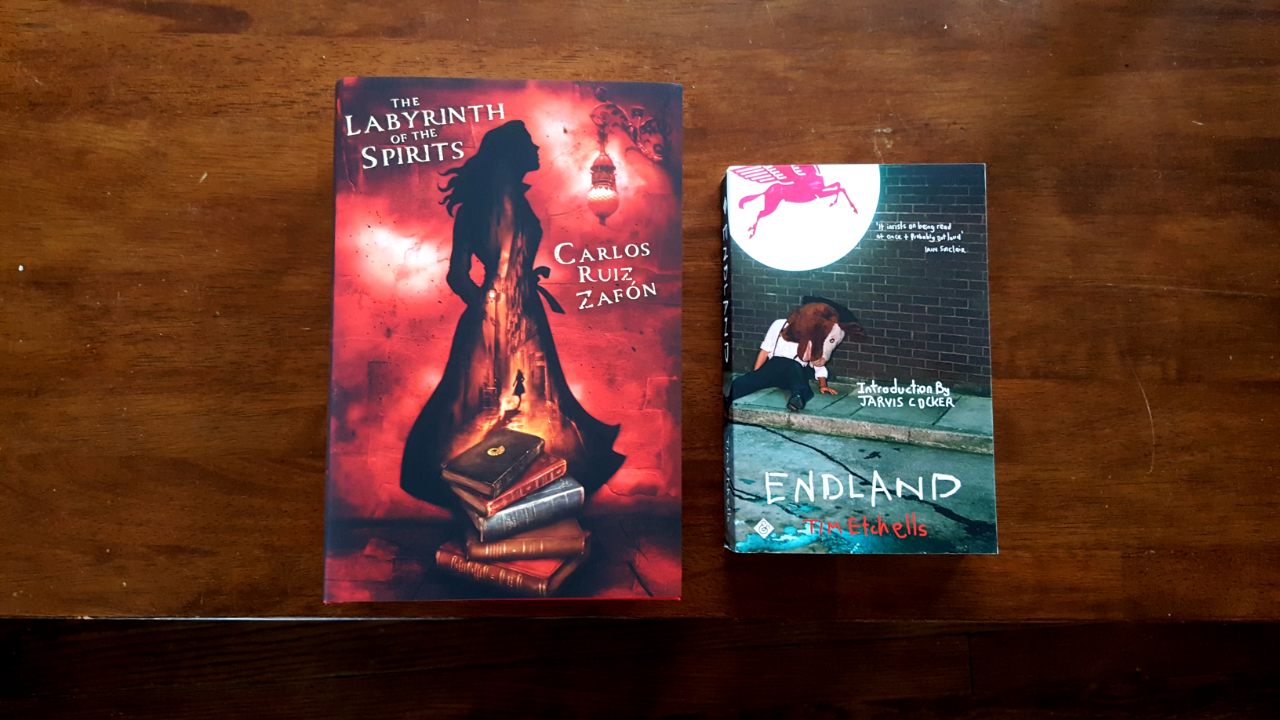 Yesterday whilst out shopping with my girlfriend I picked up some cardboard bank boxes, and filled them with books which, until that point, had been on my bookshelves.

Two things prompted this decision. First, as I no longer live alone, space in our living quarters is at somewhat of a premium and, well, I have a lot of books. Second, the two books which arrived last week at the Library of Winkelman Abbey are HUGE.

On the left is Carlos Ruiz Zafon’s The Labyrinth of the Spirits, the last of the four volumes of his Cemetery of Forgotten Books series. It is 880 pages long, several inches thick, and quite heavy. On the right is the latest delivery from And Other Stories, Endland by Tim Etchells. It is also quite hefty. At almost 400 pages it is probably the longest book I have received from this publisher.

So books require space. So do relationships. Therefore one corner of my attic is now the archive, and the first 60 books from my collection to be stored are now in boxes. Since I have significantly slowed my rate of acquisition (again, relationship) I don’t expect to need to shuffle books around more than once every six months or so.

I don’t have a firm criteria for which get archived, other than that I don’t anticipate wanting to read them, or needing them for reference, or otherwise finding them all that interesting at the moment. That could change in years to come, so I am trying to come up with a tracking system of some kind so I can, if need be in the years to come, find specific archived books with a minimum of hassle.

In reading news, I finished re-reading Jim Harrison’s True North, and it was every bit as good as I remember from the first read ten years ago. I am in the middle of Insides She Swallowed, a poetry collection by Sasha Pimentel Chacon which I picked up at Arkipelago Books in San Francisco in June 2018. I haven’t read enough to form a solid opinion, but the poetry therein is beautiful.

As the year winds down my already limited reading time becomes even more scarce and suddenly fifteen uninterrupted minutes is a precious commodity. NaNoWriMo starts in eleven days and the volunteer work for ConFusion 2020 is slowly ramping up. All of this is fun and wonderful but O, the time disappears so quickly. 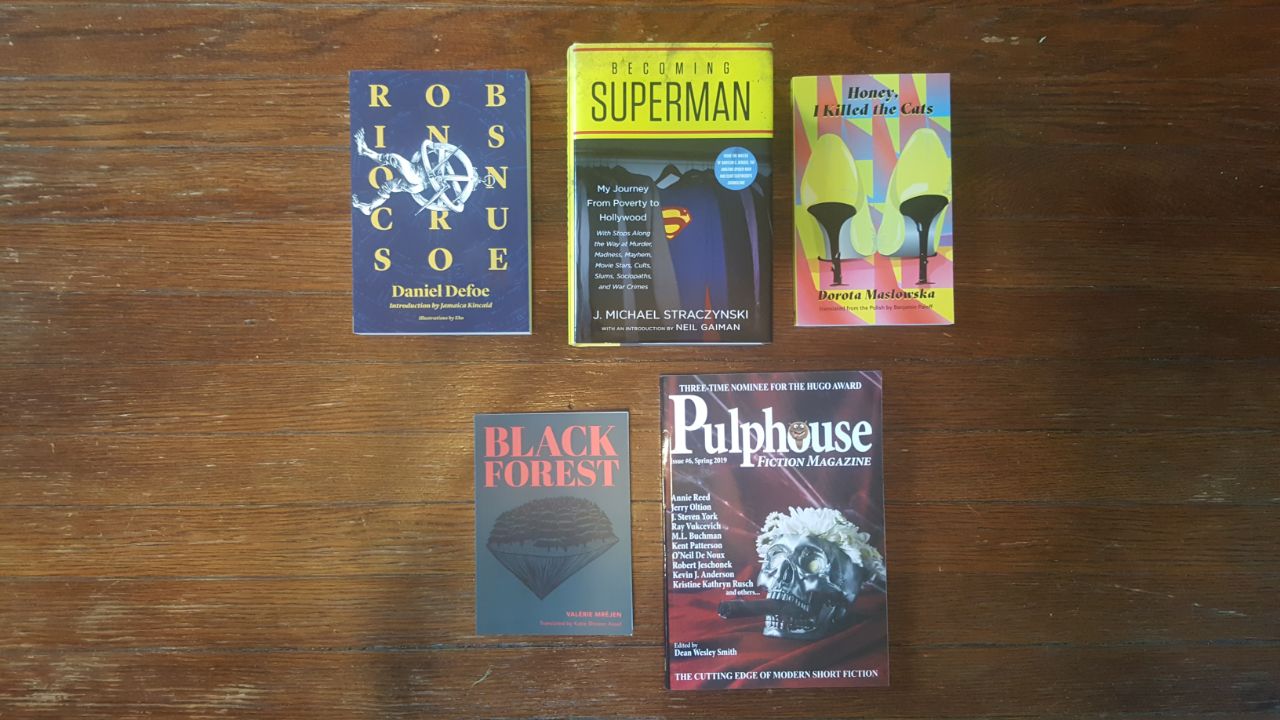 My life has been crazy busy for the last several months, and though things are beginning to wind down, the psychological and emotional hangover is just beginning. I’m tired. Really, really tired. I spend my (still limited) free time reading books. So some things haven’t changed.

This past week most of the acquisitions came from subscriptions of various kinds – the latest issue of Pulphouse, two books from Deep Vellum and one from Restless Books. I did go out of my way to pick up J. Michael Straczynski’s Becoming Superman, as it has been on my list for a few months, and is now at the top of my to-read stack.

In reading news I am a little over 100 pages into Black Leopard, Red Wolf. I seriously love this book! It is amazing, and I wonder what the hell reviewers were talking about when they compared it to Game of Thrones, because other than belonging to approximately the same broad genre, they are absolutely nothing alike. It’s like saying that fans of Lonesome Dove will really like Blood Meridian.

I am also re-reading True North by Jim Harrison. I recently loaned my copy of Dalva to a friend and realized that I had not read any of Harrison’s fiction in at least a couple of years. His work still holds up, and I wish I had a fraction of the talent he brings to the page. 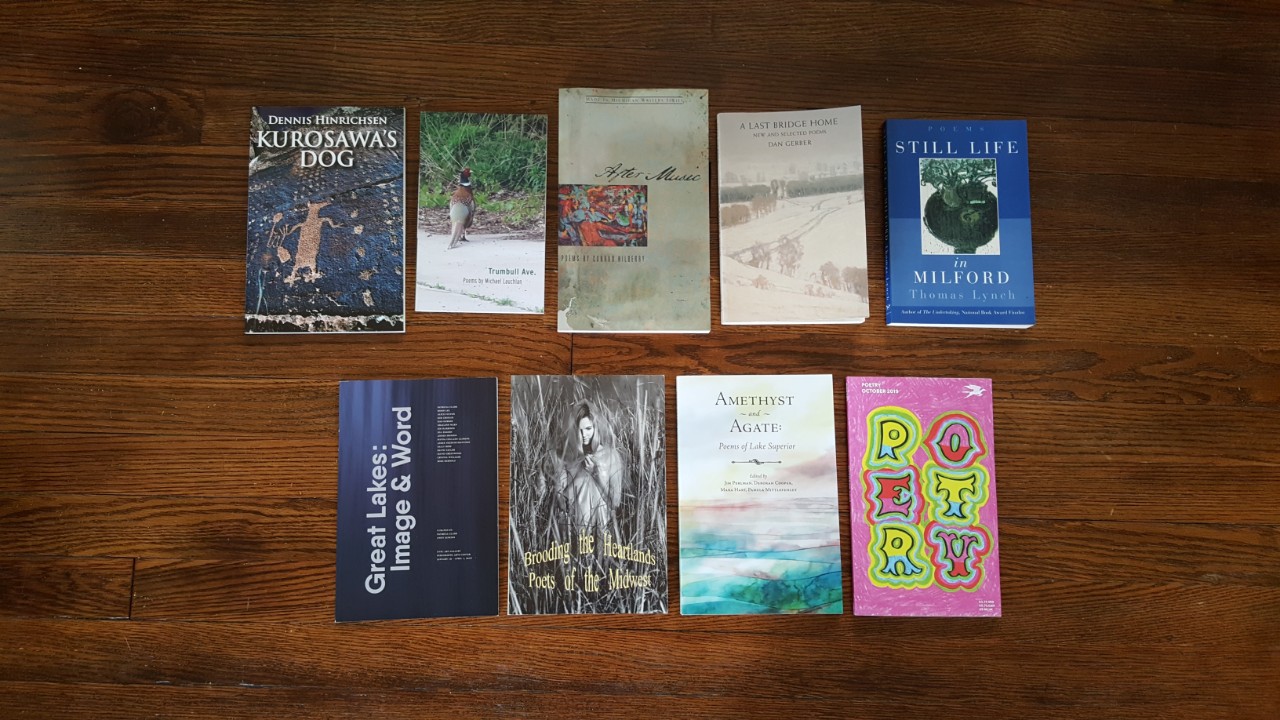 So what we have here is a big pile of poetry books and one issue of Poetry. The magazine came from a subscription. The books came from the bookshelves of Write616 (formerly the Great Lakes Commonwealth of Letters).

Why, you may ask, do I have a big ol’ stack of poetry books from the shelves of Write616? Well, therein lies a tale.

For the past couple of years, the GLCL/Write616 has shared space with Caffeinated Press, the publishing company of which I have been a part owner/director/executive/dogsbody since 2014. This past weekend the Powers That Be of Caffeinated Press met and decided that, as we are all of us older, exhausted and burned out, we will be closing down the shop at the end of 2019. Parallel to this decision, the Powers That Be of Write616 made a similar decision.

Thus closes a chapter of my life which has been front and center to my day-to-day existence for just over five years. I started as an editor in September of 2014, just after the publication of the first volume of the Caffeinated Press house anthology Brewed Awakenings. I joined the board in early 2015, and shortly thereafter we launched our journal of arts and letters, The 3288 Review (named after the miles of coastline in Michigan, as measured in 2000).

We still have a few projects in the works which are mostly completed. The last issue of The 3288 Review will come out at the end of this month. The remaining few books which are in process will be complete by the end of the year. All of the paperwork, finances, etc., will wind down by December 31.

And I will, for the first time in five years, have free time in my life on a regular basis. Of course, knowing me, I will immediately fill it with something else. Already I have ideas for a new lit journal, one which would focus more on art, interviews, and specifically the Grand Rapids literature scene.

But before I do anything like that I will start writing again. And submitting my work for publication. I have dozens of poems in various states of completion, as well as more than a score of short stories and essays. And they need homes. Also, National Novel Writing Month begins an about three weeks, so it’s time to start planning something to write.