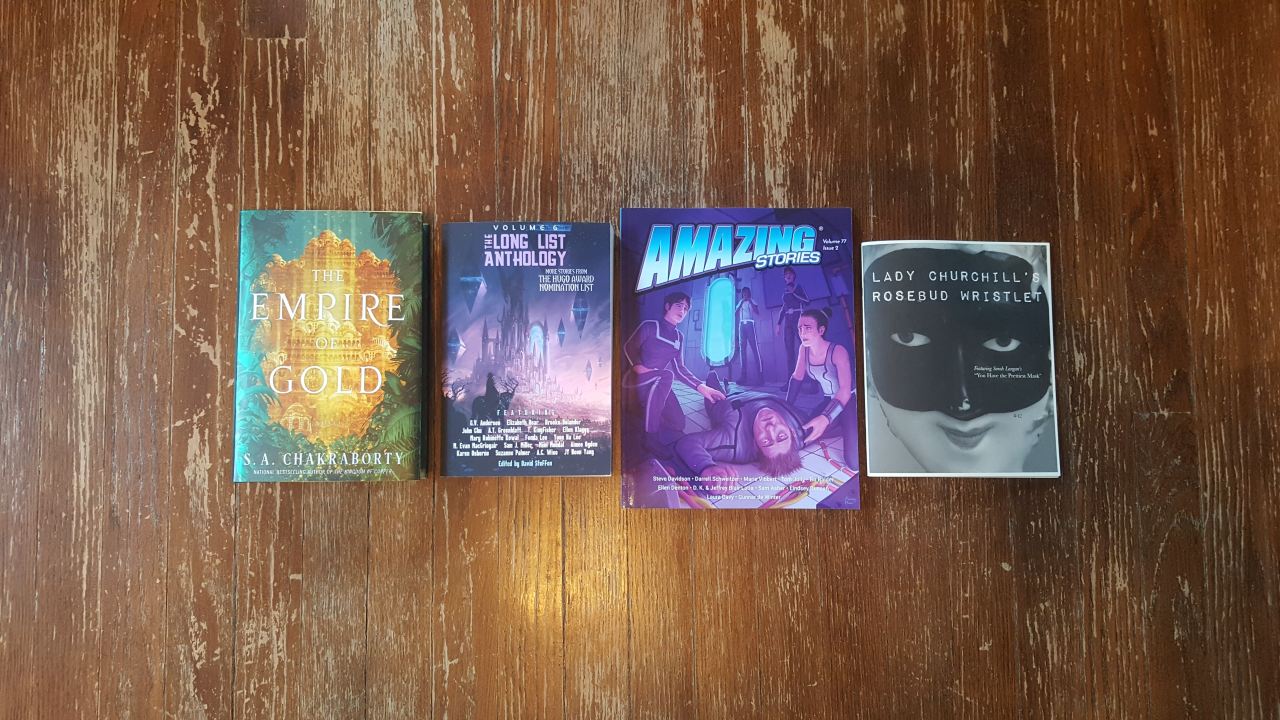 A small but significant stack arrived this week. On the left is Empire of Gold, the final book in the Daevabad Trilogy by S.A. Chakraborty, I have unfortunately only read the first in the series. I now have the set, but likely will not have time to read the next until the end of the year.

Second from left is volume 6 of the superb Long List Anthology of Hugo Award finalists. Again, I have the complete set but have only read a few stories from each book. And again, I really need to spend more quality time with the books I already have.

Second from right is the latest issue of Amazing Stories, of which I most certainly do NOT have the entire set, as it has been around since 1926.

And on the far right is the latest issue of Lady Churchill’s Rosebud Wristlet, the excellent literary magazine published by Small Beer Press. Again, not the full set etc., though as this is issue #42 I could in theory hunt down all the past issues. Hmmm…

In reading news, I have been catching up on short stories, and will post the list of such which I read in November, at the beginning of December. I am also making my way through Chuck Wendig’s Damn Fine Story, which is brilliant and entertaining and I am slowly working my head back into the space from which stories come, though I doubt it will be in time to make even a bit of difference for NaNoWriMo 2020.

I am also still working my way through Matthew Desmond’s Evicted, which is no longer making me angry. Rather, it is making me deeply, profoundly sad for everyone involved, with a few noted exceptions where obvious sociopaths are involved in the eviction process. Fuck those guys.

The year is winding down and, other than a few Kickstarter rewards, I don’t expect to acquire many more books and magazines before January. Just as well. I don’t seem to have time to read the ones I have already picked up.