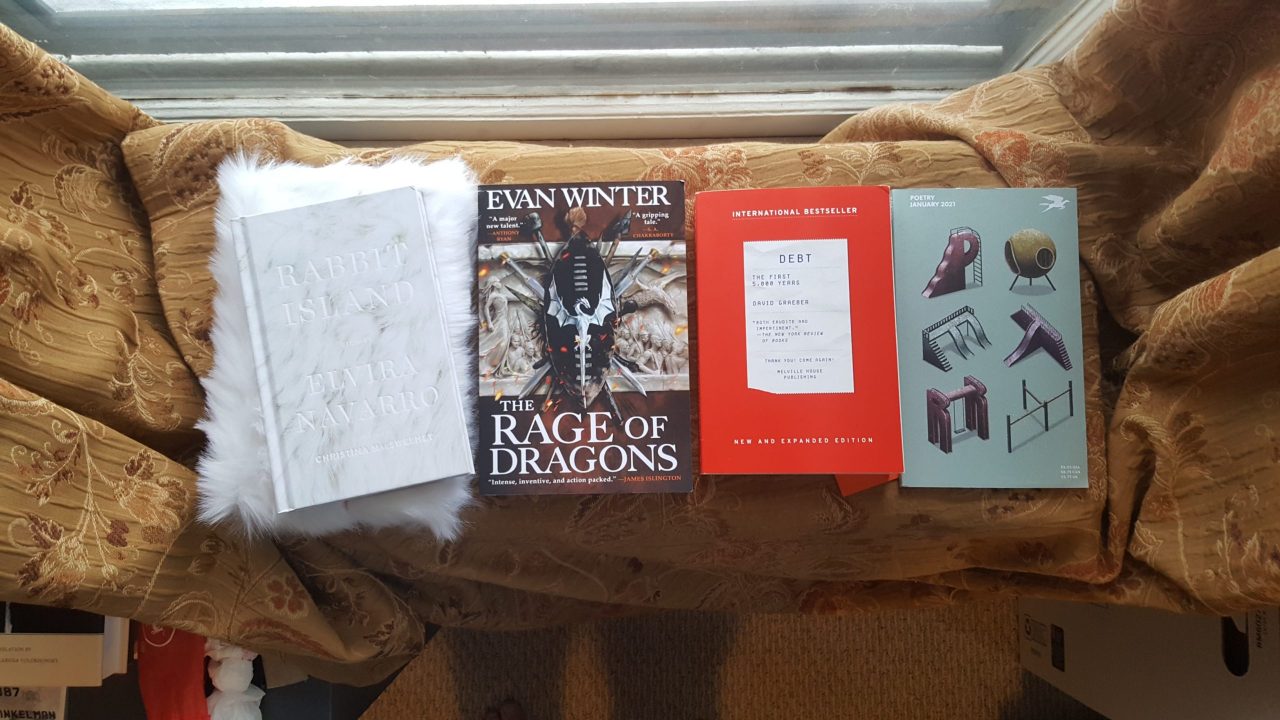 Right now I have two small recently-fed orange cats soundly asleep on my lap. The comfort derived from this state of being stands in sharp contrast to a week of chaos in the immediate, local, regional, and national levels, as the banshee/specter/mummy hybrid which is 2020 refuses to let go of the flow of history and is increasingly infecting 2021 with its fatal toxins. We can only hope that with the turning of the Lunar New Year things will start to look up.

An interesting mix of reading material arrived this past week at the Library of Winkelman Abbey.

On the left is the new release from Two Lines Press, Rabbit Island, which was written by Elvira Navarro and translated from the Spanish by Christina McSweeney. This specific book came in a subscriber-only boxed editing wrapped in white faux-rabbit fur. I love it!

Second from left is The Rage of Dragons by Evan Winter, which I ordered from the best bookstore in Grand Rapids, Books and Mortar.

Third in is David Graeber’s Debt: The First 5,000 Years, also arriving courtesy of Books and Mortar. I ordered this after receiving from Semiotext(e) The Making of the Indebted Man and Governing By Debt, both by Maurizio Lazzarato. This line of study follows the recent forays into the varying aspects of carceral capitalism, and the racist roots, trunk, branches, twigs, leaves and fruits of America, from its first day to the eternal now.

In reading news, after six weeks (and about 30 years) I finally finished The Brothers Karamazov. This is a big deal because I have attempted to read it at least twenty times since my first Russian Studies class back in September of 1990. The farthest in I made it before 2021 was about a hundred pages. I guess my attention span is finally long enough to tackle 800-page books written in the 1800s.

I am also close to the end of John Giorno’s Great Demon Kings, and will likely finish it on Monday. The writing is a little uneven, but the story of Giorno’s life is fascinating, and his view into the art and writing scenes in the fifties, sixties and seventies is both remarkable and valuable.

With these books out of the way, I think I will read short book for the next couple of months. Like, nothing longer than about 250 pages. And given the density of Dostoyevsky’s prose, one Brothers Karamazov if equal to about a dozen of any novel written in the past 50 years.

In writing news, I have written drafts of a poem or two, which is the most creative work I have done since early November 2020. Feels pretty good.