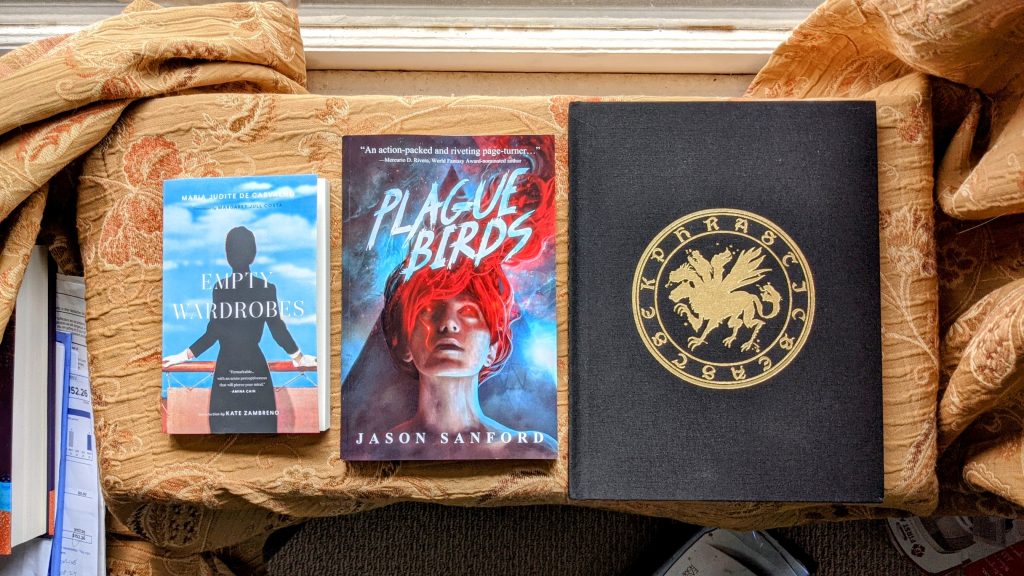 This past week was one of little to nothing accomplished. A combination of terrible insomnia and stress, along with some kind of mild illness (not COVID, according to the test I took on Wednesday), left me as brain-dead as I have been in any week this past year.

Three new books arrived at the house this past week.

On the left is Empty Wardrobes by Maria Judite de Carvalho, translated from the Portuguese by Margaret Julie Costa and published by Two Lines Press.

In the middle is Jason Sanford’s new novel The Plague Birds, published by Apex Book Company.

On the right is Ekphrastic Beasts, a combination art book and RPG monster manual published by Janaka Stucky by way of his Kickstarter campaign. This book is the basis for the title of this post.

The past two years have been tough on everyone. The COVID pandemic has disrupted the interconnected systems of the world to a level usually not seen outside of world wars. Everyone is having a tough time. Everyone is stressed.

On April 28 of 2020 Janaka Stucky launched the Kickstarter campaign for his RPG monster manual Ekphrastic Beasts. The pandemic was well underway at that time, and quarantines had been going on for well over a month. There was no indication at that time of how long the lockdowns would last, or what the effect would be on the global workforce and supply chains. Simply put, the modern world had never experienced a disruption like this, ongoing, pervasive and unpredictable.

The original estimated delivery date was well over a year ago. Obviously, since the book just arrived here for my weekly update, that deadline has long passed.

In the comments for this Kickstarter are many, many messages of support, many more messages expressing concern and/or some level of dissatisfaction with the caveat of understanding that times are tough, and a few messages which basically say, “fuck your problems, ship the books.”

There are any number of reasons for a Kickstarter campaign to miss its deadline – shipping issues, production issues, workforce issues. Personal issues. This kind of thing happens. It is unfortunate that it happens, but it happens.

Over the last two years a great many deadlines have been missed for a great many reasons, almost all of them related either to COVID (and peoples’ responses to COVID) or the occasional cargo ship stuck sideways in the Suez Canal. This is just as frustrating for the people responsible for fulfillment as the people expecting to be fulfilled.

So coming in when a long-delayed Kickstarter is finally complete, and complaining about the wait, and about the perceived deficiencies in the product, without acknowledging the unique circumstances of the past two years is, frankly, a dick move, and people who feel such a gross sense of entitlement, no matter the amount of money they put down, deserve to be disappointed. It isn’t all about you. Pull your head out and take a look around at the world, and then choose to feel a little empathy rather than kick the one person who held it all together in order to complete the project, come hell or high water.