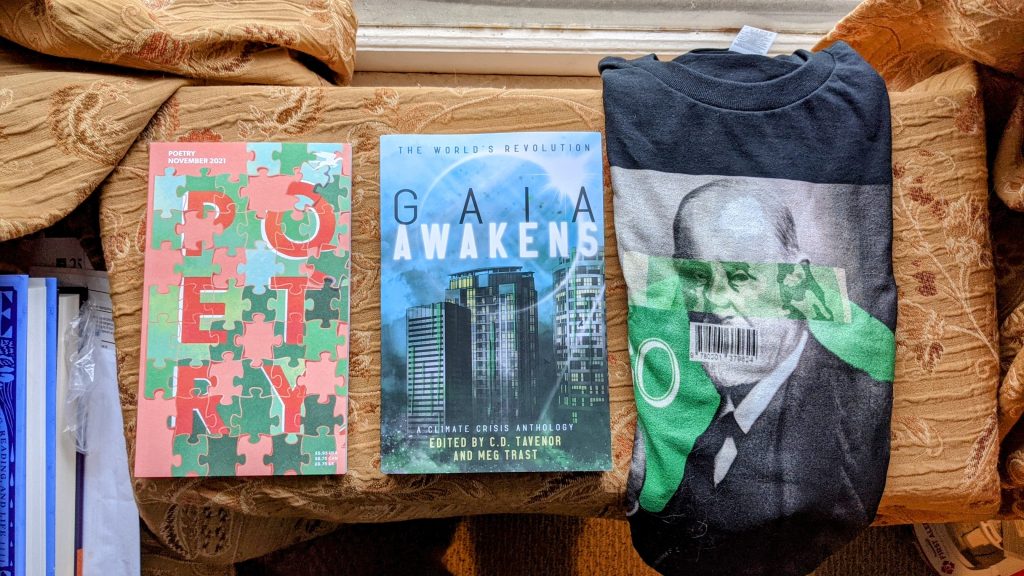 Yesterday I wandered over to Books and Mortar to help Jenny and her crew move the store from their old location at 955 Cherry Street SE, across the street to their new location at 966 Cherry Street SE. The moving event was supposed to take three hours, and I set aside a couple of hours more because I know about moving locations. I also expected maybe a dozen people to show up (again because I have lots of experience with moving) because the day was cold and intermittently rainy.

But instead, the weather broke and the sun came out, and at least 75 people showed up and formed a human conveyor belt to move the books across the street, and the entire inventory and most of the fixtures were in the new space in less than an hour. Books and Mortar have photos and video of the event up on their Instagram. I look forward to seeing the new space when it is finished (grand re-opening November 5!).

Two new bookish things arrived this week, and one shirt.

First up is the latest issue of Poetry, which continues to be a balm of sorts for when the world gets a little too chaotic.

Next up is Gaia Awakens, a new anthology of climate crisis fiction from a recent Kickstarter created by C.D. Tavenor and Meg Trast of the Two Doctors Media Collaborative. I backed their project at the tier which included the “Eco, not Ego” tshirt, which I will happily wear to conventions, if the conventions I attend ever happen again.

In reading news, I started David Graber‘s Debt: The First 5,000 Years, which should keep me good and angry through the end of November.

In writing news, I am slowly amassing a pile of notes for the kickoff of NaNoWriMo in a week and change. I am trying something new this year – instead of breaking up my writing by chapter or story, I created 30 documents in Google Docs, one for each day of November, and will just put everything I write on each day in each document. I’ll worry about redistributing the words to their final resting places after the end of the month. What comes out of NaNoWriMo is the zero-eth draft of the work. The first draft will appear out of the random pile of typing once I have time to review what I have written.