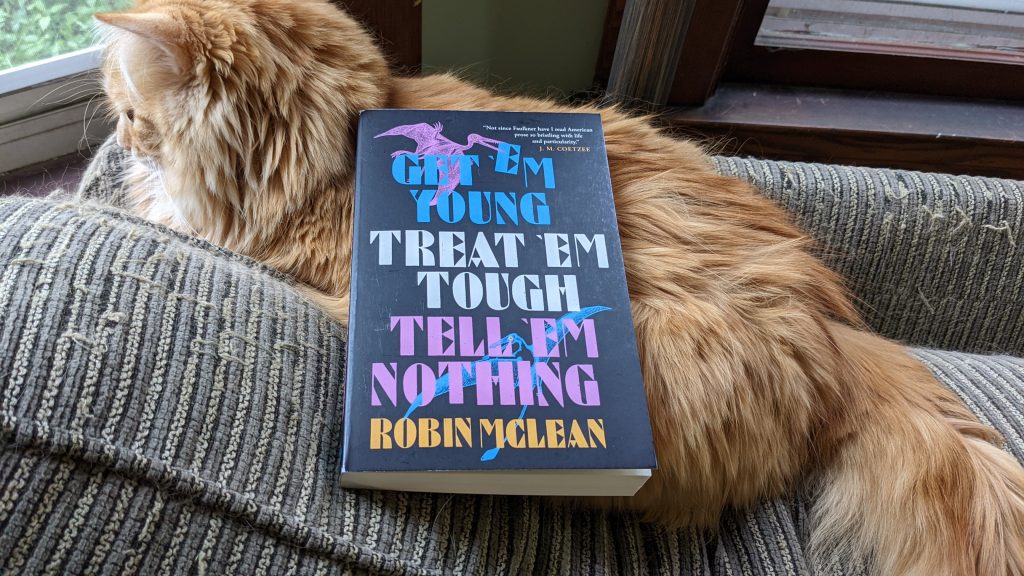 I have two information-dense personal projects going on right now – the “Bottom of the Top” posts, and my deep dive into all the back issues of literary journals which have been slowly accumulating in my house. This means that I am encountering, in a time-shifted way, many musical and literary works for the first time. The Bottom of the Top project starts in 1977 and runs through 1997 in five-year increments. My stack of old lit journals goes back at least five years, and many of the pieces therein were originally written one to a hundred years prior, though the older works tend to be outliers.

Only one new book arrived in the past week – Robin McLean‘s collection of short stories titled Get ’em Young, Treat ’em Tough, Tell ’em Nothing, published by And Other Stories.

In reading news I am caught up through the end of 2017 in my stack of back issues of The Paris Review. This led me (with reference to the notes at the top of this post) to encounter New York artist Duncan Hannah, whose memoir 20th Century Boy was excerpted in issue #222 who was a contemporary of Andy Warhol and and active participant in the Scene in New York City from the 1970s on. I had not heard of Hannah before reading this excerpt, and immediately added his book to my list of upcoming purchases.

Then I did some more research and discovered that Duncan Hannah died a few weeks ago, on June 11. He was 69 years old, which doesn’t seem that old to me, from the vantage point of 53.

I also had a lot of fun reading Ana Simo’s Heartland, which I would happily put on the shelf next to Michelle Tea‘s Black Wave and Rita Indiana‘s Tentacle. With that complete, I have shifted gears back to more mainstream genre fiction and burned through John Scalzi‘s The Consuming Fire, the second book in the Interdependency trilogy, in two days. I am now reading the final book in the series, The Last Emperox. As with everything else I have read by Mr. Scalzi, these books are a lot of fun.

In writing news, a whole lotta nothing over the past week. That seems to be the state of things this summer.