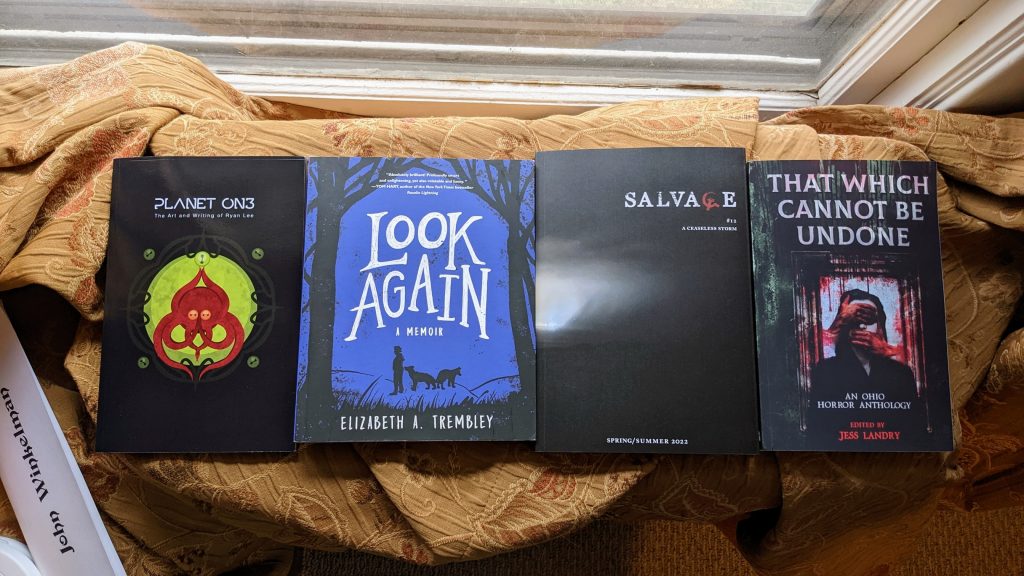 Rumor has it that this winter will be long and cold, thanks to a weaker El Nino system out west. It isn’t apparent at the moment, as this whole week, the middle of October, was in the sixties and seventies during the day, with one night warm enough to sleep with the bedroom window open a crack. Still, even in the sunniest of afternoons, standing in the shadows reminds me that the days are indeed shorter than the nights.

Several new books arrived at the house in the past week.

Next is Look Again: A Memoir, by Elizabeth A. Trembley. I met Trembley years ago at at the informal open studio hosted by poet Jack Ridl. When Caffeinated Press was still around, I published some of her artwork in The 3288 Review. I knew she was drawing comics, but we fell out of touch and I didn’t know she was working on a book until Jack announced that Look Again had just been released.

Next is the new issue of Salvage which will join the small stack of unread issues which I will get to probably sometime in the spring of 2023.

Next, fresh from a successful Kickstarter campaign, is That Which Cannot Be Undone: An Ohio Horror Anthology, which arrived just in time for the Halloween season.

In reading news, at long last I have reached the end of my stack of The Paris Review. As I mentioned last week, reading so much literature in a compressed time-span can lead to some interesting coincidences. The most recent instance was with issue #239, which contained an excerpt from the journals of Annie Ernaux, who just won the Nobel Prize in Literature.

I had never before read Ernaux, and indeed was barely aware of her existence before the Nobel, so to read these journal entries (which were exquisite, by the way, and exquisitely translated from the French by Alison L. Strayer) so recently after having heard of her Nobel win, felt kind of like the universe was telling me something; like I was, to crib from John Constantine, riding the synchronicity highway.

Relatedly, Ernaux’s journal excerpts, which I believe were pulled from her book Getting Lost, reminded me of Emmanuelle Pagano‘s beautiful Trysting, which I read several years ago.

Now that I am done with The Paris Review (barring a possible last issue which might appear at the end of the year), I have moved on to my small stack of Lady Churchill’s Rosebud Wristlet, a small magazine of genre fiction published by Small Beer Press. So far, a couple of issues in, the stories and poems are delightful! I might even renew my subscription to LCRW after I clean out my back-log of other unread periodicals.

In writing news, NaNoWriMo looms on the horizon, and I have yet to complete, or even seriously start, my preliminary notes. The next two weeks will pass quickly.