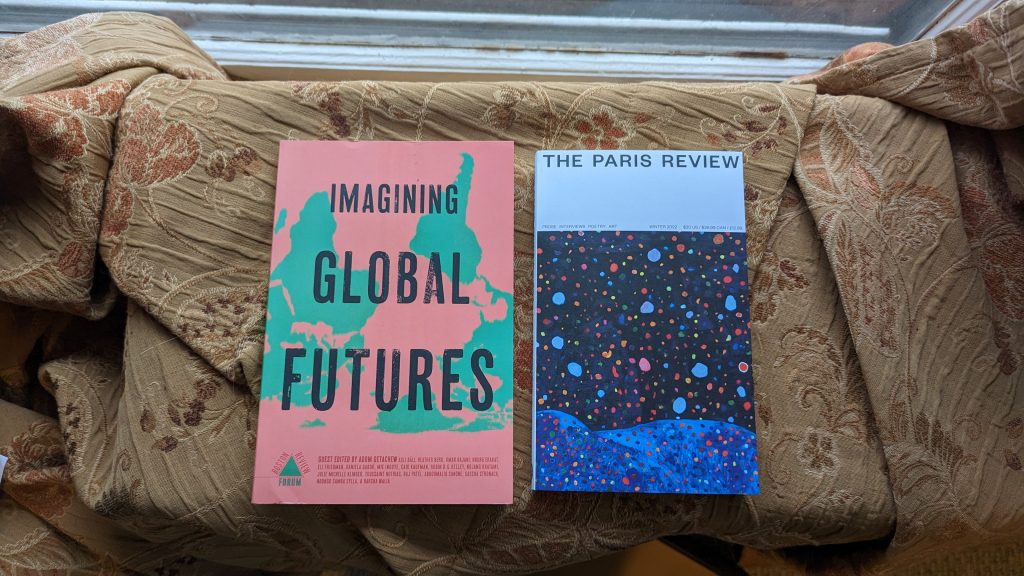 As we reach the midpoint of December I feel, for the 22nd year in a row, a profound sense of relief that I no longer work in retail. When the owners of a store yowl, from their expensive house in an expensive neighborhood, that the workers making barely more than minimum wage need to work both smarter AND harder, I begin to understand why the plans for home-made guillotines are proliferating across the internet.

Two new journal arrived at the house this week. On the left is the latest issue of The Boston Review. On the right is the latest issue of The Paris Review. Both are the last issues I will see of these publications, as I have let both subscriptions lapse. Despite my earlier misgivings I am sticking to my guns, and from now on will only purchase books intentionally, rather than subscribing to a dozen periodicals and catalogs and letting the arrivals sit unread for years at a time.

It’s also cheaper that way, which is always a concern.

In reading news, I am well over halfway through Crime and Punishment, and still expect to complete it before Christmas.

In writing news, other than journaling, I haven’t written anything since the end of November. Too many things going on all at once.

I think I am about due for another Great Simplification, the first since January of 2013. Ten years is probably slightly too long to go between Simplifications, but for the past several years I have been both happy and content, and haven’t felt the need to change things significantly. I am still happy and content, but entropy is making itself felt in several areas of my life, and in order to focus on those areas I need to let some other things in my life recede into the background.

So it goes, as always.