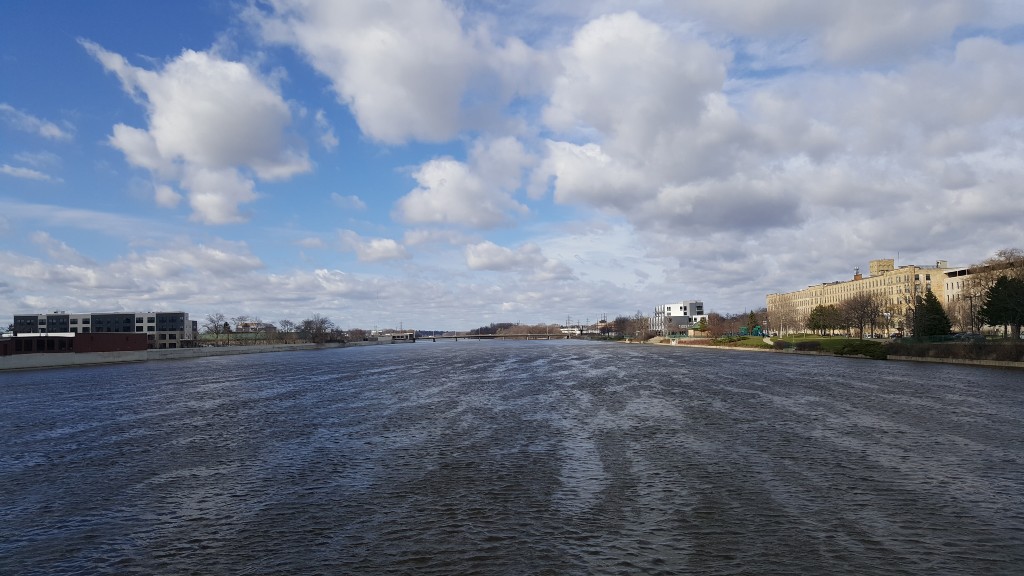 And it looks like the workflow worked. This is the Grand River, taken from the Sixth Street Bridge in Grand Rapids, facing north.

A short list this week. I’ve been out enjoying the beautiful weather with my beautiful partner.

* Exactly what it says in the title: (Almost) every Science Fiction and Fantasy and Comic Book Adaptation in the Works.

* I’ve been following the Grand Rapids Whitewater project for several years, and it looks like I might live to see rapids reappear in the middle of Grand Rapids. And I might even be young enough to enjoy them.

* More whacky news from a leader who seems sprung from the same DNA as emasculated president Donald Trump.

The Grand Rapids Police Department has just launched a new Crime Map. It is very well done, easy to use, and has more detailed and current information than I could ever hope to use in my own map. And, unlike their previous crime map, it doesn’t crash my browser when I try to use it.

I guess my work here is done.

Since I launched my map, back in 2005, I have pulled all of the incidents therein from the local news. News being what it is, only the incidents which were newsworthy made it into my map – mostly violent crime. Happenings which were out of the ordinary. As the data increased over the years it became obvious that, while it is good to know where these incidents tend to occur, it really isn’t all that useful in day-to-day life. Simply put, if something makes it into the news, it is because it is something which doesn’t happen very often.

Consider: I live in a neighborhood for years. One day one of my neighbors goes crazy and shoots his wife. For the next twenty years, nothing news-worthy happens on my street. Yet, because of that one incident, which was very much an outlier event, now my block has the reputation of being the kind of place where people get shot. Adding this incident to a map provides inaccurate information in two ways:

1. It is highly unlikely that anyone will ever repeat that crime on this block again, and

2. This was not a natural consequence of living in a crime-ridden neighborhood.

It is not the newsworthy crimes which define the livability and safety of a neighborhood – it is the mundane, happens-to-everyone incidents, like getting the radio stolen from your car, graffiti, drunken fights during a college party, drug deals, or getting mugged. The incidents which, in a city, tend to become indistinguishable from the background noise until it happens to you.

I created my map as a response to having the radio stolen from my car twice, in two different neighborhoods, two years apart. Yet incidents like that never make the local news. Which neighborhood would you rather live in – the one where someone was one killed in a fit of domestic rage, or the one where people get bikes stolen from their back yards on a weekly basis? The first incident is essentially a Black Swan, and could happen anywhere; from the worst ghetto to the most exclusive gated community. The second tends to happen where people are less involved and less invested in their property and community.

So I am going to stop updating my map. I will leave it where it is, along with the story behind it, and my contact information. I am in the process of upgrading the simple content management system behind the map, and will continue to do so until I decide I have done it right, or until someone releases a software package which does everything my system does, only better.

To all of you who have used my map for the past four years, thank you for your kind comments and suggestions. I am happy that I was able to provide this service for so long.

Once again, the new Grand Rapids Police Department Crime Map can be found at http://www.crimemapping.com/map/mi/grandrapids. Ice hanging from a tree stuck on the edge of the Sixth Street Bridge dam, near the fish ladder.
30 second exposure. Ice on a rock in the middle of the Grand River, near the Sixth Street Bridge dam.
60 second exposure. Looking East at the medical mile from the fish ladder.
15 second exposure. Looking East at the medical mile from the fish ladder. The line of lights across the sky is a plane approaching the airport.
30 second exposure. Looking East at the medical mile from the fish ladder.
15 second exposure.

I just finished up the last hour of polishing on the new version of the Grand Rapids Crime Map. Here is a list of the changes:

-all incidents are up to date
-new filters are in place: date, weekday, and street name
-more organized, usable layout
-content managed to allow for easier and more frequent updates

I built the new version – interface and content management system – in PHP. The data for the crimes is loaded using a Python script. Eventually this whole site may well be ported over to Python. It’s a neat language.

Here are some interesting tidbits which came to light using the new filters:

-Monday and Wednesday are the crimiest days of the week
-Division Ave, Plainfield Ave, Leonard Street and 28th Street have the most incidents
-49507 is the busiest zip code
-the SouthEast quadrant is by far the most exciting area of town.
-March, May and August are the angriest months

I am sure there is still a little clean-up left to do in the data, so expect things to shift around a bit over the next week or so. You can read the story here:

Story at WOOD TV
Chronology of events at MLIVE.com

I just made a small update to the UI of the Grand Rapids Crime Map. There is now a tally of the incidents displayed, based on the selections from the filters.

..and so forth. Some interesting pattern arise as you poke around in the map. I found this one, which makes me want to stay away from the 44th Street/Kalamazoo Ave area in the month of May:

I am thinking of adding the ability to filter by street name, too. I don’t know how useful that would be, but it would be interesting to be able to call out, say, Plainfield, and watch the armed robberies march north from Leonard Street to Northland Drive.

Makes me not want to go there, either.

My good friend and cow-orker Marie-Claire has recently launched a new blog called For Grand Rapids. MC is at the beginning stages of a project to get municipal wireless internet available to everyone in Grand Rapids, and ForGR is where she stores her noted and ideas, and invites everyone who reads to contribute their thoughts.

Her most recent post is a good place to start, as it contains a summary of everything she has done thus far.

…and how appropriate that she should launch this website during Random Acts of Kindness week. These photos were taken roughly 26 hours apart. The first, yesterday at around 3:00pm. The second, today just after 5:00pm. In the intervening time the lower river has risen approximately six feet and a large ice jam has begun to form. Normally there is a drop of six to eight feet over the dam. Last time an ice jam formed there was no difference between upper and lower river for about two weeks, and then the ice lasted in some places into April.

The packed ice is still moving slowly, but I expect the frigid temperatures, which hit Grand Rapids last night, will freeze everything solid before daybreak tomorrow.

I just added a new entry to the Crime Map – an Armed Assault. Some dude got shot down on the SouthWest side. I also changed the status of one of the crimes. This is the first time I have needed to do such a thing, and it upset me a little. There was a kid got beat up outside of a bar back on the 10th of this month. Well, a few days ago, he died of his injuries. So now the Crime Map has its first homicide of the year. My sympathies go out to the family of Jonathan Krystiniak.

This bothered me more than it might have, because of the similarities to an incident that nearly took the life of a good friend. Long time readers of this blog may remember this particularly stressful month, back in 2004.

I have to say that WOOD TV is doing a very good job of covering the Krystiniak story. Of the few local news websites that actually cover local news, theirs is the only one where information is easily accessible, and regularly archived.

In other news, I have begun the process of re-designing and upgrading this website. Hopefully things will go smoothly and (for readers) invisibly, but there is the possibility that es.o could be down for a little while. I am going to upgrade the blogging software – TextPattern – to the newest build, which is 4.something. I am currently using 1.something. The new design should be ready to go in a few more weeks. I have some other things to get off my plate before I can attend to my own desires.

[EDIT: 6:15pm]
Turns out that I just had to upgrade last night’s shooting to a homicide. So now we are up to two murders in Grand Rapids in the month of January, 2008. January 2007 also had 2 murders. With four days left in the month we still have a chance to beat that record!