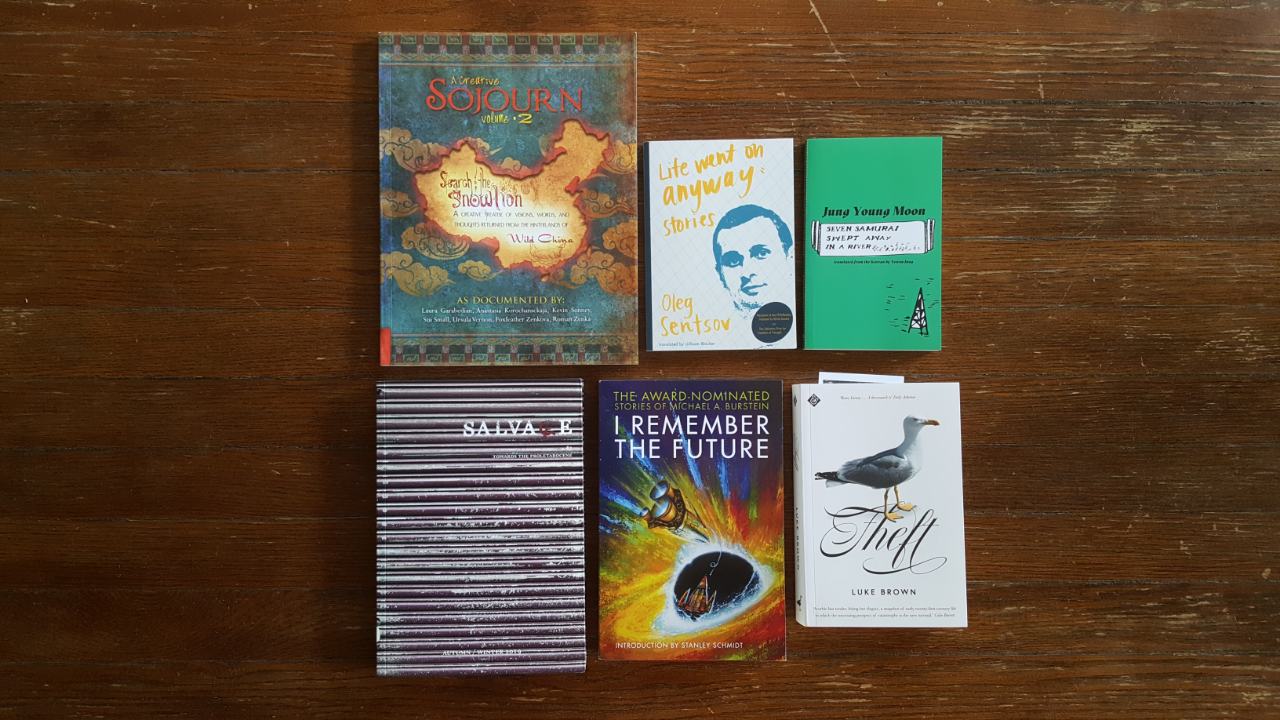 As we roll into the holidays I have come down with one of the many and varied species of Crud which roll through Grand Rapids on an almost weekly basis. This makes me sad as this, the shortest day of the year, is also one of the most beautiful and sunniest we have had in months, with temperatures in the mid-40s (F) and local squirrels suddenly regretting having grown such thick pelts for the winter.

We had a surprising stack of books arrive here at the Library this week. I suspect it was various publishers rushing to complete their 2019 tasks before the end of the year. As a former publisher (about which more below) I can understand that.

At top left is A Creative Sojourn, a spur-of-the-moment Kickstarter backing which looks like it has a lot of content near and dear to my own heart, it being a journal of sorts kept by a group of creatives as they toured China and Tibet. The nest two are the latest from my subscription to Deep Vellum, Life Went On Anyway by Oleg Sentsov and Seven Samurai Swept Away in a River by Jung Young Moon.

At bottom left is issue 7 of Salvage, which should keep my head in the appropriate place for the rest of the holidays. Next to it is Michael Burstein’s collection I Remember the Future from Apex Books. On the bottom right is the latest from my subscription to And Other Stories, Luke Brown’s Theft.

In reading news I finished Jackie Wang’s Carceral Capitalism and Mark Fisher’s Capitalist Realism and, mind blown, moved immediately on to Gore Capitalism by Sayak Valencia. I have to say, this type of reading has put my head in an interesting and uncomfortable place, which I think can best be summed up by a tweet I posted yesterday:

So, yeah, when I’m done with the leftist books I might need some time to reintegrate into the ever (and increasingly) wingnutty world of West Michigan.

A few days ago I removed from the Caffeinated Press offices the remaining copies of the twelve issues of The 3288 Review. And with that, my involvement with Caffeinated Press has ended. It was a good run, but now it’s over, and at present my strongest associated emotion is relief. I suspect that as time goes on my feelings will drift over to nostalgia tinged with regret as, for all its frustrations and long nights, it really was a lot of fun and quite rewarding in all ways except the financial.

Maybe I’ll do it again some day.