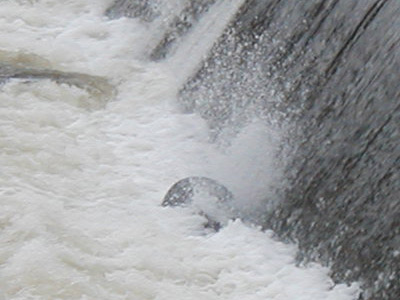 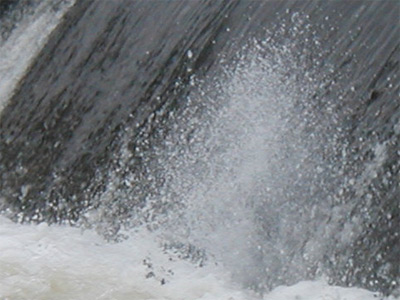 Every workday at lunch I head across the street to the east bank of the river. Here I relax and stare into the turbulence at the base of the Sixth Street Dam, the west side of which houses “the fish-ladder”, one of the more interesting constructs in the city. Scott is usually there with me. We find that the ebb and flow of the water, the infinite variations on the same scene, effectively wash away the visual trauma of hours spent staring at computer screens.

The daily scenes are variations on a theme: fishermen, fish, seagulls, ducks, some toxic-looking foam clinging to the rocks. Last winter we watched for half an hour as a huge ice floe drifted to the edge of the dam and crashed and splintered and thundered into the lower river. This past spring we watched as young ducks caught young fish and chewed them until they were soft enough to swallow. A gull caught a trout fly in mid-air and was thoroughly hooked. Scott gave a leather-back turtle an accidental hotfoot with a cigarette butt.

The undertow at the base of the dam traps buoyant objects against the falling water where they are gradually – time depending on material and density – worn away to nothing. A chunk of styrofoam which started out square will gradually become round. A basketball will become a smooth pink sphere. Large branches and trees will become hung up halfway over the dam, embedded firmly in the mud of the lower river. Smaller logs and branches gradually become smoother and softer until they appear, in a beautiful irony, to be manmade.

Today one of the smoothed, rounded logs found its way into the center of an old car tire and, acting as an axle, turned the tire toward the dam where it even now spins as if trying to climb the waterfall like a salmon; the rooster-tail sometimes reaches higher than the upper river. Even without taking into account the extreme odds against such a juxtaposition of events, the sight is extraordinary.