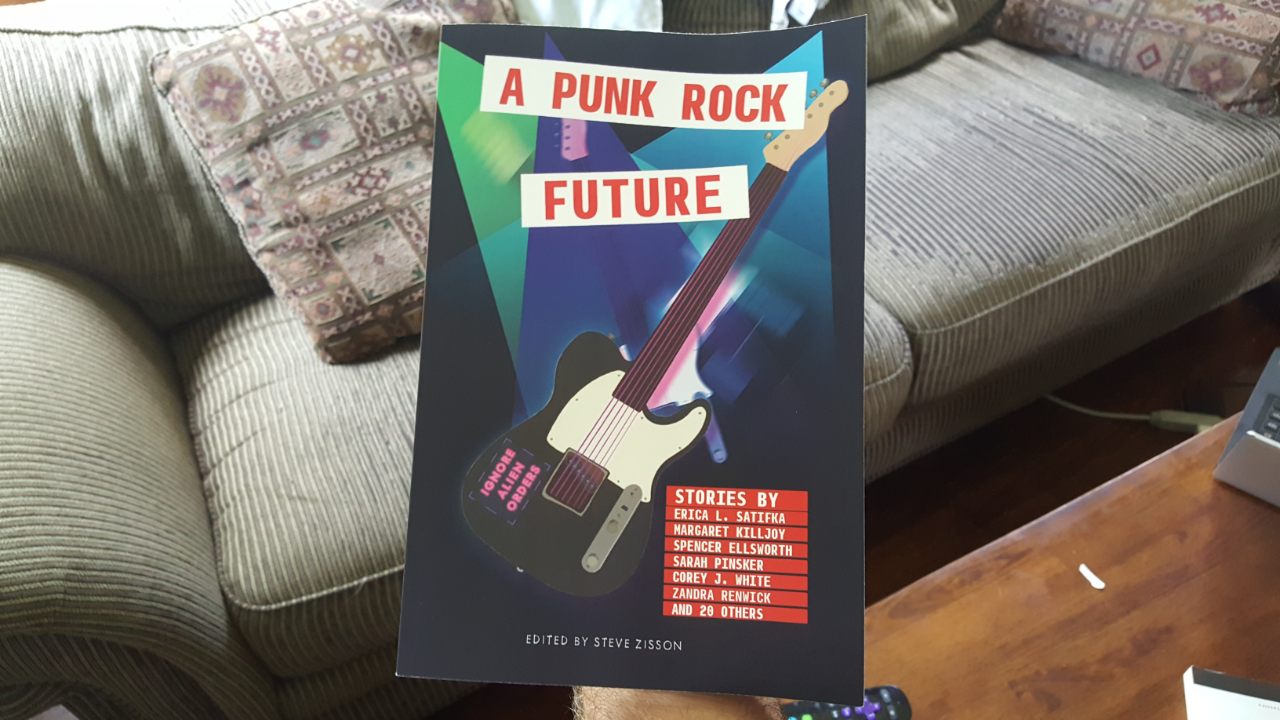 And just like that, we’re back! San Francisco was wonderful. We stayed in the Warwick, which is right in the middle of everything, and we ate ALL THE FOOD, which is all I will say about San Francisco in this post. We visited City Lights Bookstore, of course, and more San Francisco stories will accompany the photo of my haul from there.

Just one book arrived when I was out; A Punk Rock Future, from a Kickstarter created by the excellent Steve Zisson. For the general public, the book is available for pre-order at Amazon and will hit the shelves in October.

This was extra-EXTRA-special for me because my friend Steven (not Zisson) has a story in the collection, which I only discovered when I scanned the table of contents. I love when my friends win!

On the reading side of things, the week leading up to the trip was hectic and didn’t allow for much quiet time. I did burn through Mary Robinette Kowal‘s short story collection Scenting the Dark and Other Stories. I have long enjoyed Kowal’s novels and podcasting, but this was my first foray into her short works. And they are great! Highly recommended.

Once vacation started, things settled down. The plane ride was about four hours each way, which gave me something which I very seldom have any more: big blocks of uninterrupted reading time. And who, historically, has written books meant for readers with big blocks of uninterrupted reading time? The Russians! Specifically, Ivan Turgenev. I brought with me the collection First Love and Other Stories, which I picked up in August of last year. Eight hours on a plane was just about perfect to read the six stories therein.

I like Turgenev’s writing. He has a deep understanding of how young men think and how they react to love, heartache, and stress. That said, the main characters are not particularly likable. They tend to be of a type. “Wanker” is, I believe, the clinical term, though Turgenev treats them with empathy and compassion, rather than as the butt of jokes. Not that there isn’t plenty of humor herein, of the satirical and sarcastic variety.

And that is how, early in my fiftieth year, I completed a reading assignment handed to me by my Russian Studies professor in January of 1991. I suppose I should let Dr. Rydel know I’m finally done. 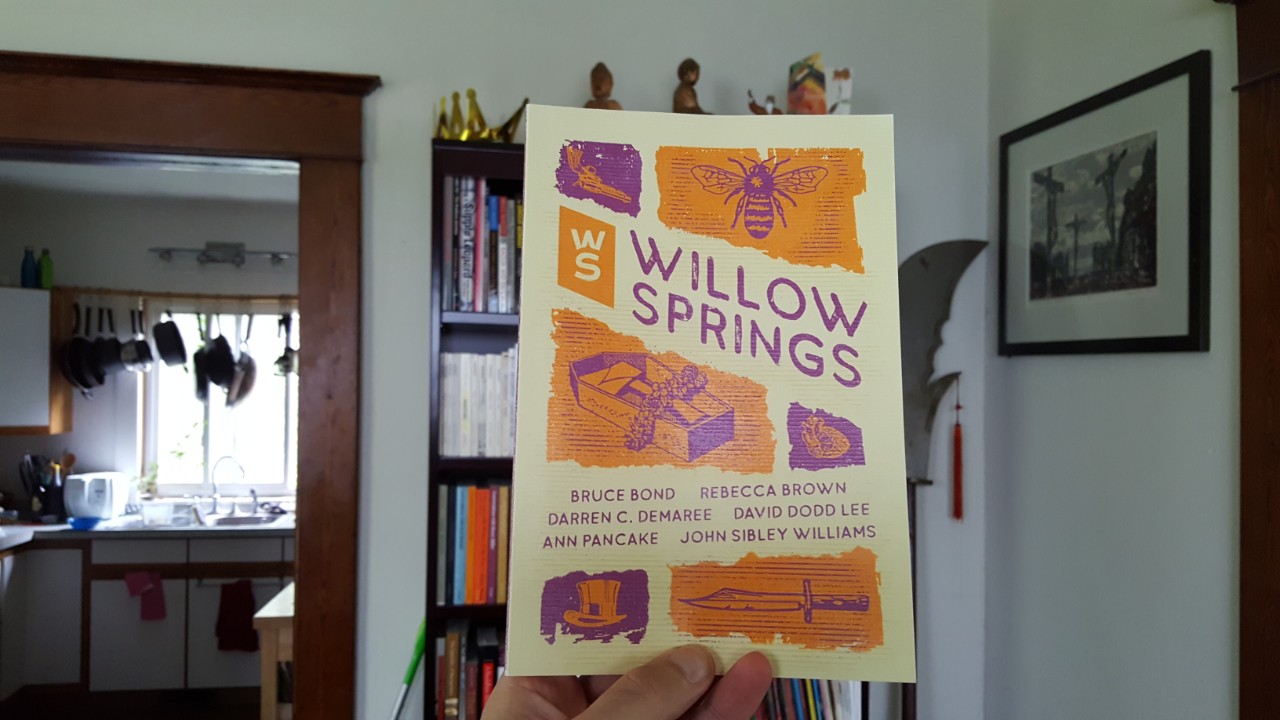 Quick post. In the airport, on the way to San Francisco. Not much to add to the stack; just the latest issue of the excellent Willow Springs. Will likely have a big pile when I return, because that’s what happens when I travel to San Francisco. 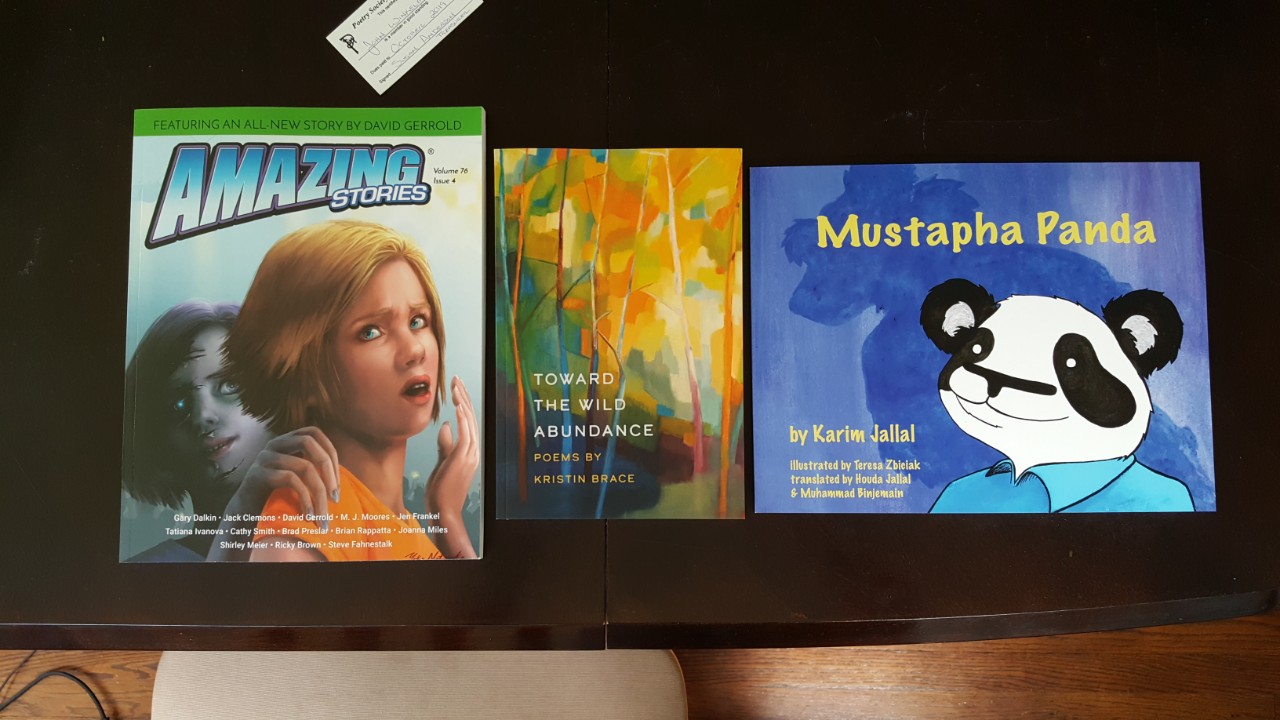 We are slowly catching up on sleep here at the library of Winkelman Abbey. Fortunately the poorly-socialized idiot who lives across the street didn’t blow up as much of the block as he has done in years past. Then again all of those tickets for disturbing the peace are probably beginning to add up.

A small stack of books this week, but two of the three include work created by friends, so what the pile lacks in height it more than makes up for in importance!

On the left is the latest issue of Amazing Stories. I don’t know anyone therein, but if I did I am sure we would become fast friends. In the middle is local poet Kristin Brace‘s new collection, Toward the Wild Abundance. Kristin is a superb poet and a wonderful human being who for many years worked at the Creative Youth Center here in Grand Rapids.

On the right is Mustapha Panda, from a recently-completed Kickstarter, with words by Karim Jallal and artwork by Teresa Zbiciak. I met Teresa recently, and in addition to being an extremely talented artist, she kills at karaoke. I love this book! It is a super-simple story about non-violently standing up to bullies and how to show compassion in the face of cruelty. I want to buy a copy of this book for every first grader in the state.

Recently Michigan was recently ranked the worst state in the nation for bullying. Having lived here for most of the last fifty years, I can confirm that bullying might as well be Michigan’s official state sport. And as bad as it was for me back in grade school in the 1970s and 1980s, it is immeasurably worse for kids now, with communications technologies providing ever newer and more inventive ways for one person to torment another from the safety of distance and anonymity.

It’s no wonder the majority of voters in Michigan cast their ballots for Trump in 2016. Bullying is made up of equal parts sadism and cowardice, and Trump has both in such abundance that it leaves little room for anything else. The bootlick attitude of bully appeasers comes from the same place, psychologically, as does the compulsion to show contempt toward and victim-blame people less fortunate than ourselves. Cower upward, kick downward. That, in a nutshell, describes the entirety of the puddle of dog vomit which is the administration of our odious 45th president, his supporters, admirers, appeasers, enablers and lickspittles. As was pointed out nearly a year ago, the cruelty is the point.

And that concludes the political commentary portion of this post. At some point I will do some long-form essays on the stochastic terrorism which our emasculated president commits with his every tweet, word and action.

(Maybe I should break the non-book commentary out into separate posts.) 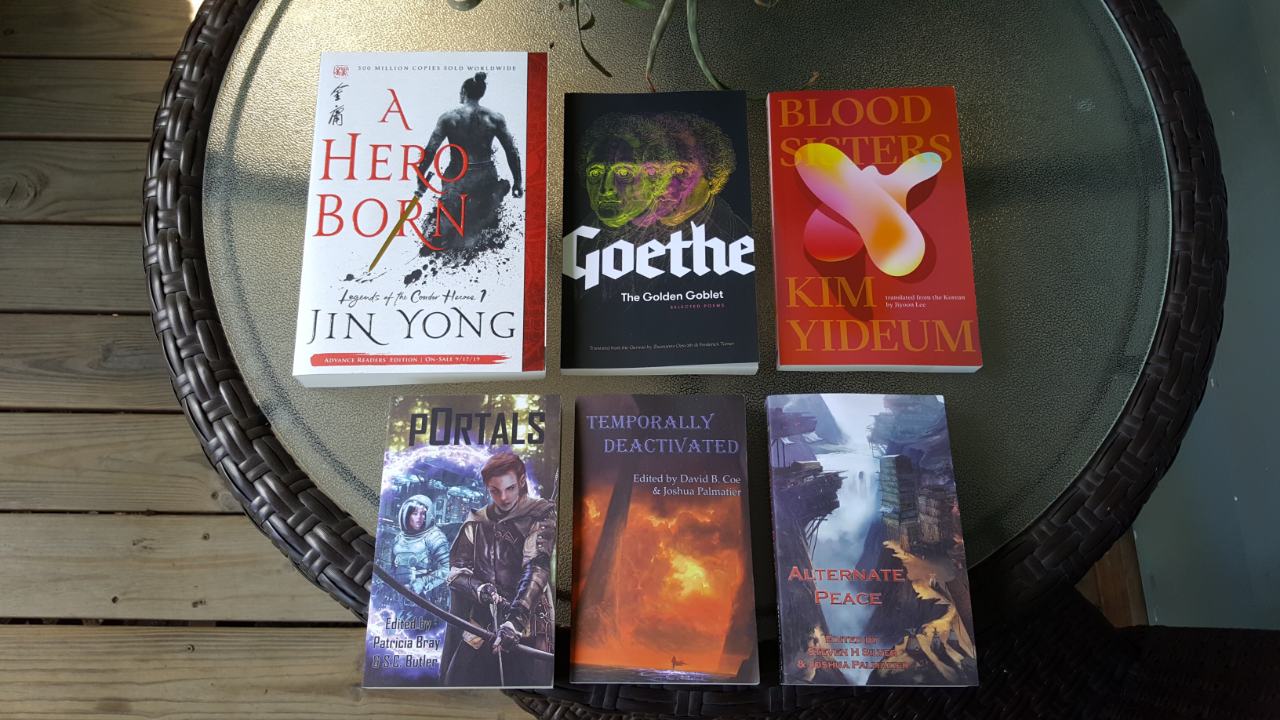 So there I was, waiting for the holiday to begin and SUDDENLY OUT OF NOWHERE* there appeared an ARC of Jin Yong’s A Hero Born. The publisher ran a sweepstakes thing a few weeks back and I entered, as one does, not expecting anything to come of it. This just proves that hope is real.

The other two books in the top row are the latest from Deep Vellum Publishing – a collection of the poetry of Johann Wolfgang von Goethe, and Blood Sisters, a newly-translated novel from South Korean writer Kim Yi-deum.

The bottom row consists of my rewards from a Kickstarter campaign I backed back in fall of 2018. Zombies Need Brains LLC publishes anthologies centered on various subjects and topics. Last year they announced Portals, Temporally Deactivated and Alternate Peace. I submitted a story to Portals, which was rejected, though it was a personalized rejection so I didn’t feel too bad about it.

ZNB just announced the themes for the 2019/2020 collections: Apocalyptic, Galactic Stew, and My Battery is Low and It’s Getting Dark. The submission window will open when the Kickstarter launches the first week of August. Keep an eye out, and warm up your pens!

In reading news, I had a great, relaxing few days over the Independence Day weekend and dove into some science fiction from Patrick Tomlinson – The Ark and Trident’s Forge, which I picked up (and got signed!) at ConFusion a couple of years ago. Now I am about a third of the way through Rebecca Roanhorse‘s Storm of Locusts, the sequel to her excellent Trail of Lightning.

To keep myself on task I have begin transcribing all of the poetry sitting unattended in my (over 25 years of) journals. A lot of it is already in Google Docs, but the exercise of re-writing it by hand is useful for seeing where the poems can be improved and also gives me a sense for how my style and sensibilities have changed over the decades.

And maybe I’ll submit something to somewhere sometime.

* actually delivered by a postal employee 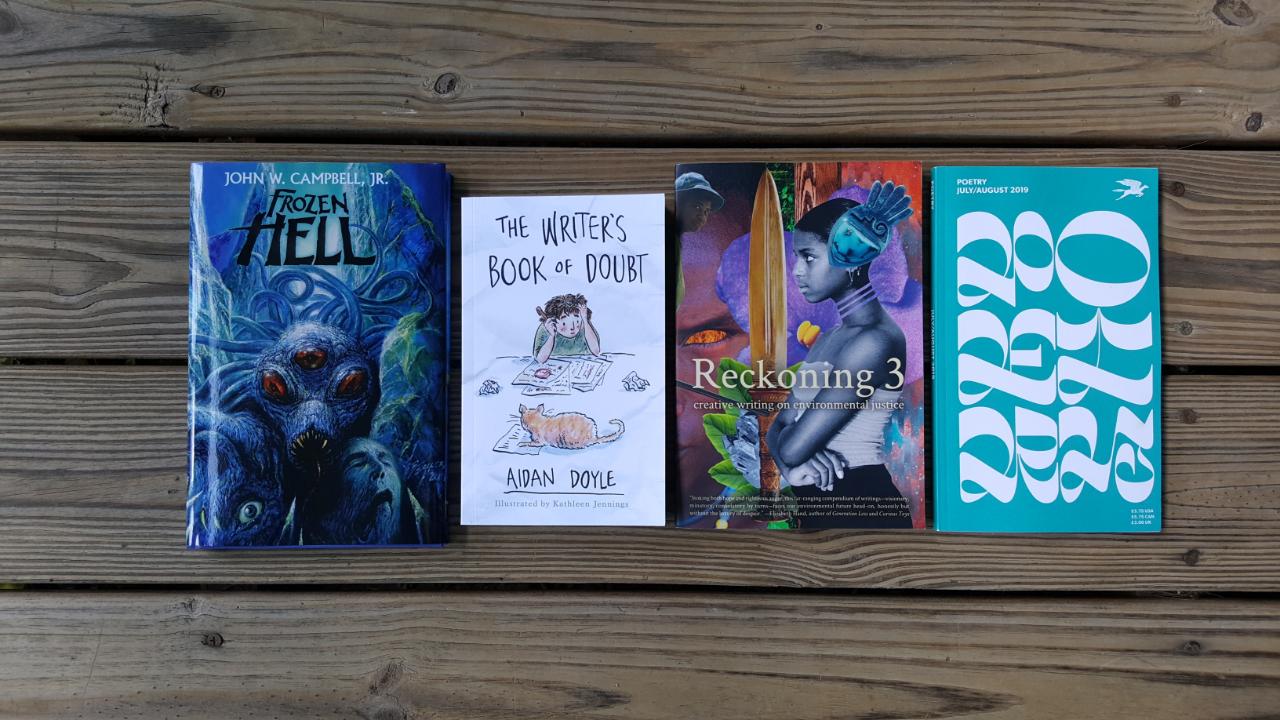 And just like that, the year is half over. Moderately more ups than downs at this point, which is entirely reasonable.

This was a slow but interesting week for the acquisitions department at Winkelman Abbey. Two Kickstarter fulfillment packages arrived, as well as two journal issues. On the left is Frozen Hell, the newly-released deluxe hardcover version of the John Campbell story which inspired The Thing. On the left-of-center is The Writer’s Book of Doubt, an anthology of encouragement for writers, by writers. Center right is the new issue of the always excellent journal Reckoning, and on the right is the latest issue of Poetry. These all just kind of appeared at my doorstep and I didn’t have to lift a finger.

In reading news, just before midnight last night I finished the book which I have been beta-reading for the past two months. It was superb, but I need to let it sit for a month before I offer my feedback to the author. I am also about 20% through the book of essays for which I will be providing a blurb in a few week. For pleasure reading I picked up Ken Liu‘s novella The Man Who Ended History: A Documentary. I quickly realized that, while a beautiful story, it’s a terrible story, if you follow me. Or, as Tom Waits would put it, “beautiful melodies telling me terrible things”. I’ll likely finish it this evening if time permits.

June 30 was the last day of submissions for the October 2019 issue of The 3288 Review, and I am hard at work sending out acceptance and rejection letters and contracts and other various communications on behalf of Caffeinated Press. After an extended bout of self-inflicted FUBAR around the previous issue, this one is coming together nicely, which makes me very happy as I finally have some breathing room in my life, so I can enjoy the summer with my wonderful girlfriend. Maybe I’ll even do some writing. And maybe it will even be good. And with a whole lotta luck and some good old-fashioned elbow-grease, I’ll get something published by the end of the year.