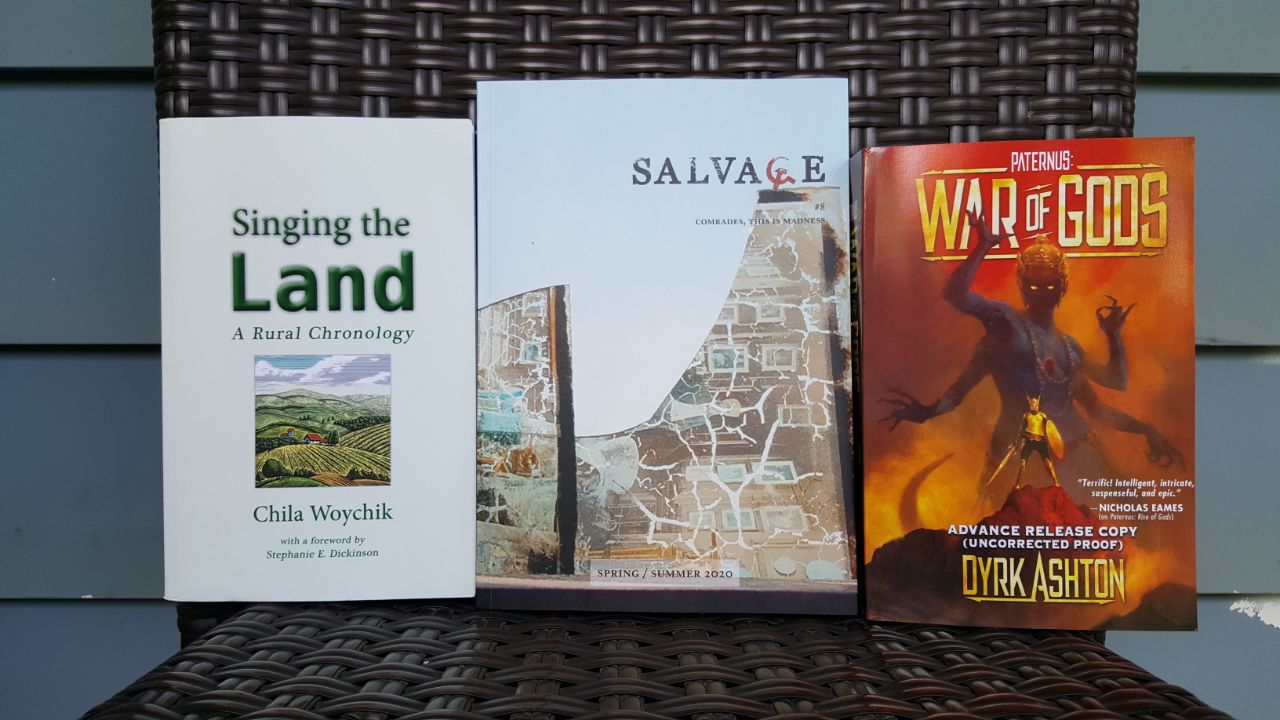 The days, that is. I am in my fifties now, so I may be as well, if only as measured by the most delicate and expensive of medical instruments. Poe consistently wakes me up at 5:00 am, which is only a little before my alarm goes off and once she wakes me up I never really get back to sleep again, so why not enjoy the extra half-hour of stillness as the world wakes up around me?

This past week saw three new additions to the Library of Winkelman Abbey, but what this stack lacks in height it more than makes up for in importance.

On the left of the above photo is an inscribed copy of Singing the Land: A Rural Chronology by Iowa writer Chila Woychik. I became acquainted with Chila when Caffeinated Press published a couple of her lyric essays in The 3288 Review, thereby greatly expanding my awareness of the world of creative nonfiction. I had the great honor of reading a draft of Singing the Land last summer when Chila approached me for a cover blurb, which was a first for me. And Singing the Land is wonderful! Chila has a fine sense for tone and cadence, and to read her work is sheer joy.

In the middle is the latest issue of Salvage, the leftiest of leftist literature I read regularly. The articles herein are dense and intelligent and thought-provoking, which is to say also angering a fair amount of the time, as is most leftist literature these days, as the global cultural center continues to scream rightward. We are well into neofeudalism/neofascism at this point, wearing late-stage capitalism as a flag of convenience. Note that Salvage is genuinely leftist, not the milquetoast American version of “the left” which by any rational measure would be called “right-wing authoritarian”.

(One of these days, when I have finally given my last fuck about employment-based stability in my life, I will write some blog posts about the specifics and details of my political sensibilities. Or I could write about them now and hasten the process.)

On the right is an ARC of Dyrk Ashton’s Paternus: War of Gods, the final book in the Paternus trilogy. I picked up a copy of the official release a couple of weeks ago. This volume is a Kickstarter reward and is (w00t!) inscribed by Dyrk, and is therefore a much-appreciated addition the the library.

In reading news, I am still buried in R.A. Salvatore’s Forgotten Realms novels as comfort and wind-down reading in the few quiet moments of my days. I finished Passage to Dawn a few days ago and am now several chapters into The Silent Blade. I expect to finish it by the end of July, at which point I will pivot back to more literary fiction, as spending too much time in someone else’s world makes it difficult to create a world of my own.

I am still working through Captivating Technology, and becoming continually more disgusted by the purposefully sadistic confluence of corporate capitalism and carceral practices described therein. I mean, it’s nothing new, but the fractal nature of the profit-based cruelties and cruelty-based profits described here leave me feeling more than a little guillotiney.

And finally, I am slowly working my way into Sing, Unburied, Sing by Jesmyn Ward. which has been on my to-read list for well over a year. I am only in the first chapter but I can see that this will be one of the best books I read this year. Or maybe this decade.

Now that I am back on a regular sleep schedule I think I am ready to begin writing the novel again. I will likely shelve the work I have already done, which is two partial versions of chapter 1, and start over this upcoming Monday morning, which is the first Monday in August. My initial goal will be a minimum 5,000 words a week, which will get me to 80,000 words sometime in November, and will also allow me a NaNoWriMo boost if I need it in order to finish the book and maybe work on some supplemental material.