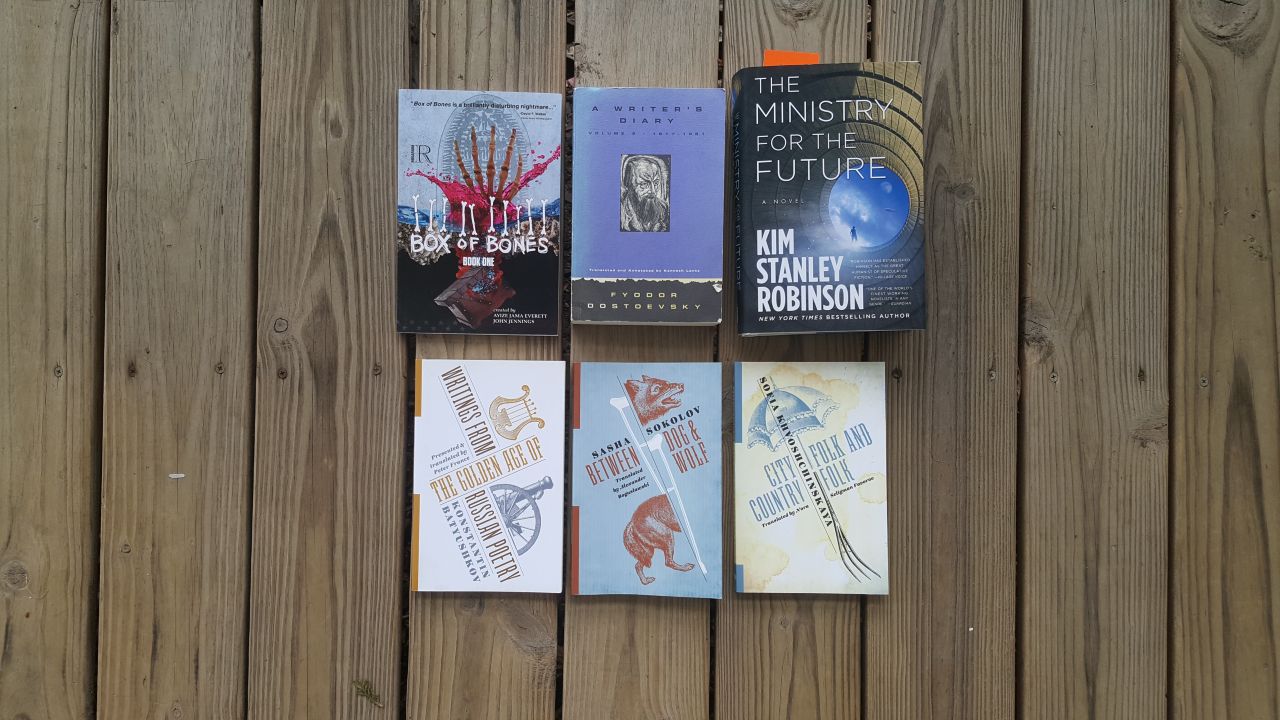 We had a great start to the acquisitions process here at the Library of Winkelman Abbey. The first full week of 2021 saw six new books arrive.

On the top left is Box of Bones, by Ayize Jama-Everett and John Jennings, from a recently-completed Kickstarter campaign run by the ever-excellent Rosarium Publishing.

In the top middle is volume 2 of Fyodor Dostoevsky’s A Writer’s Diary. I picked up volume 1 around 20 years ago, and I swore I had purchased vol. 2 at some point, but it is nowhere to be found and I suspect it was lost during a move or vacation or something. I had to buy this one used, as new copies sell for over a hundred dollars.

On the right is Kim Stanley Robinson’s newest book The Ministry for the Future. I am already 400 pages in, and it is magnificent! I have been a fan of Mr. Robinson’s work since I first read Red Mars over twenty years ago. The Ministry for the Future is more in line with his works like the Science in the Capitol series or even New York 2140, of which this could well be a prequel. Robinson shows his work and imbues his novel with a strong sense of hope, though hope born of difficult struggles and terrible loss.

The bottom row is the result of an impulse purchase made after I discovered The Russian Library series published by Columbia University Press. I have recently started following Read Russia, and they are in partnership with CUP to publish lesser-known (outside of Russia) Russian writers of the past 250 or so years; from the late 1700s to well into the 21st century. So far they have released about two dozen books, and many more are scheduled for the next few years.

On bottom left is Writings from the Golden Age of Russian Poetry by Konstantin Batyushkov, translated by Peter France. In the middle of the bottom row is Between Dog and Wolf by Sasha Sokolov, translated by Alexander Boguslawski. On the bottom right is City Folk and Country Folk by Sofia Khvoshchinskaya, translated by Nora Seligman Favorov.

(Yes translators are important, and they deserve as much recognition as the writers.)

So between these books, and Doctor Zhivago which arrived last week, and my slow but steady process through The Brothers Karamazov, I am in for an interesting few months of reading.

Speaking of reading, I am currently making progress in three books: The aforementioned The Ministry for the Future, the aforementioned The Brothers Karamazov, and Sheldon Wolin’s Democracy Incorporated. Cheerful stuff, here in the first full week of 2021, four days after an insurrection and attempted coup at the nation’s Capitol Building.

Assuming society still exists next week, I will post an update to my progress through these books.