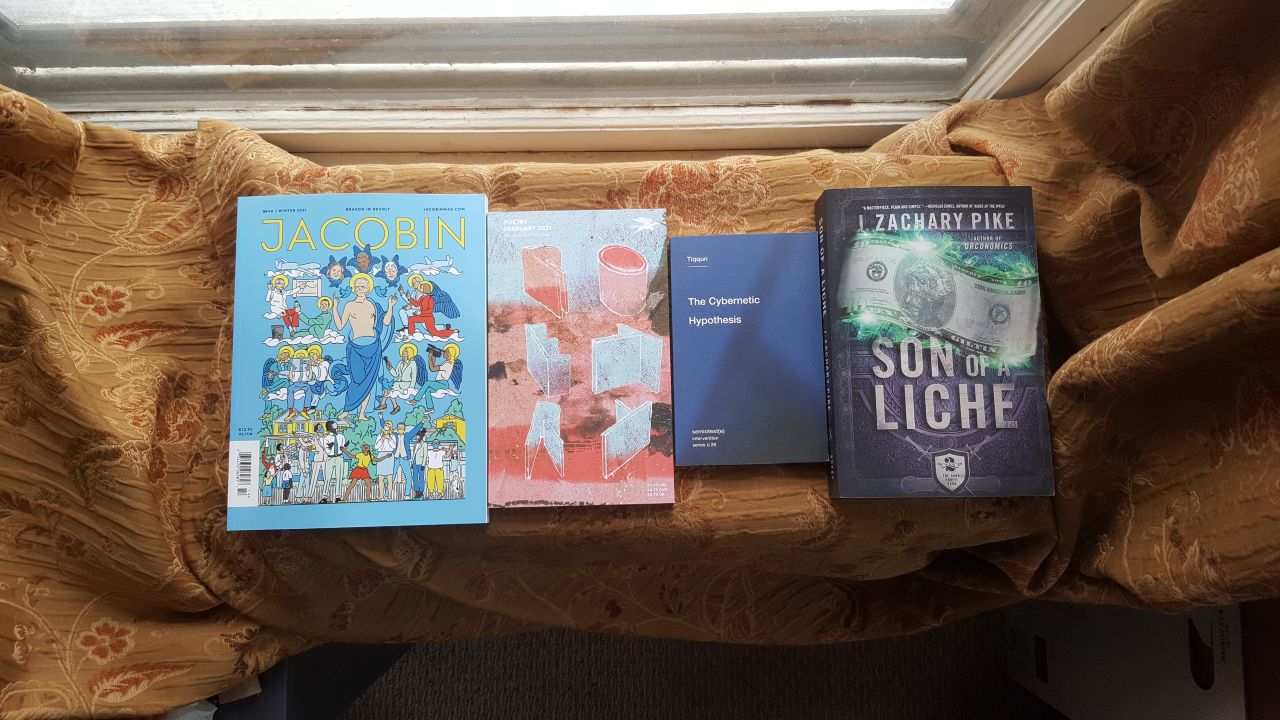 Last week felt like the first normal week of 2021. I had no family drama or cat drama, though we had Pepper fixed and after a day of withdrawal from the Ketamine which is used in cat sedative, she was back to being her usual sweet self, although with a bare belly and a shaved foreleg (for the i.v.) which makes her look like she is wearing an UGG boot.

It was a pretty good week for reading material here at the Library of Winkelman Abbey. Four new founts of information and entertainment arrived during the first genuinely wintry cold and snowy week of the season.

On the left (ha!) is the latest issue of Jacobin, a magazine which has only increased in importance since America’s slide into being a corporate fascist state was slowed slightly by the election of Joe Biden.

Third is The Cybernetic Hypothesis, a text by contributors to the leftist journal Tiqqun, from Semiotext(e), a publisher (and group) known for writing material which caused noted coward and fascist bootlick Glenn Beck to wet himself in terror at their mere mention.

On the right is Son of a Liche by J. Zachary Pike, which is the sequel to the wonderful Orconomics. This one is self-published, as was the first which won the Self Publishing Fantasy Blog-Off in 2018.

In reading news, I finished Isabel Wilkerson‘s Caste: The Origins of our Discontents and it left me with much the same feeling as Matthew Desmond‘s Evicted, Sheldon Wolin‘s Democracy, Incorporated, and most certainly Michelle Alexander‘s The New Jim Crow. Which is to say, again, that feudalism was never overcome, it was only rebranded.

I am approaching halfway through The Brothers Karamazov and maintaining a comfortable pace to complete this behemoth of a book before the first day of spring.

Now that I am done with Caste, I started (the late) John Giorno‘s memoir Great Demon Kings, which is a fantastic window into the art, poetry and nascent media scene in New York starting in the mid 1950s. I am a little over a third of the way into the book and enjoying the hell out of it. One note: the subtitle is “A Memoir of Poetry, Sex, Art, Death, and Enlightenment”, and the sex is front and center, and very graphic.

In writing news, my mind finally feels clear and I am ready to begin. I just need to come up with some ideas.