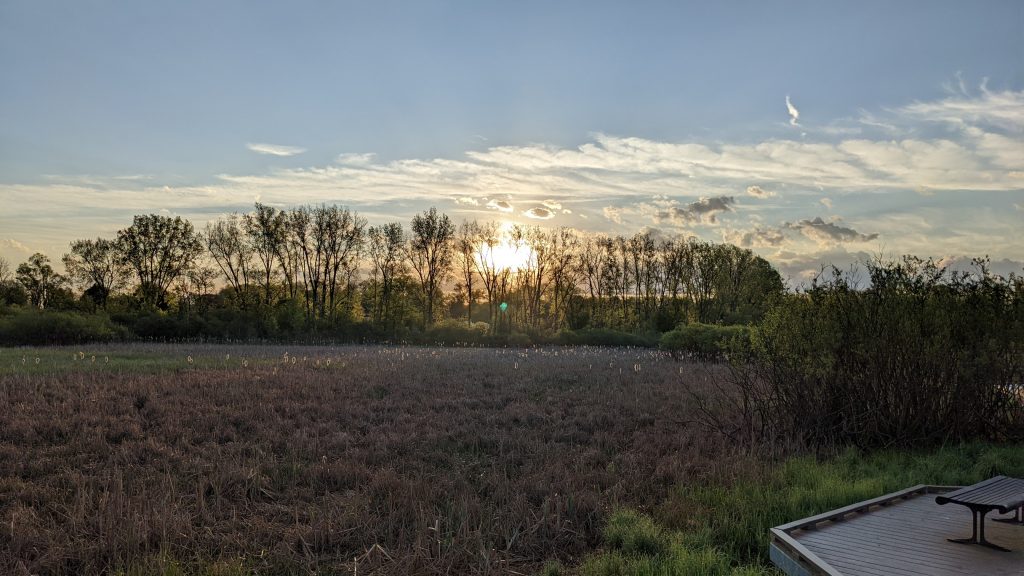 I looked up a couple of days ago, and June was closer than April. As the saying goes, the days are long but the years are short. The months are pretty short too, now that the weather has turned and people are going outside again. The change from weeks of Nothing Happening to weeks of Everything Happening occurred so quickly that I feel a sort of emotional or psychic backlash; the abruptness of the switch to something vaguely resembling the “normal” of the Before Times has put me in a vague state of panic and agoraphobia. Too much peopling too quickly.

No new books arrived this week, so the photo for the post is one I took on the morning of May 15 at Huff Park in Grand Rapids.

In reading news, as I have for the past six weeks or so, I am still working through my backlog of Poetry Magazine. I am caught up through the beginning of 2021, which means I am only a little over a year behind schedule.

I finished Benedict Anderson‘s Imagined Communities. Highly recommended. Reading about the instantiation and reinforcement of nationalisms of the past, I can more clearly see the various and myriad ways in which the conservative ideologues of America maintain and increase the nationalistic, imperialistic fervor of the idea of the United States.

With the Anderson complete, I have just picked up Stephen Duncombe‘s Dream or Nightmare, in which he discusses the rational, fact-based approach (e.g. progressive, liberal, productive) to politics in relation to the narrative based approach (in this case, nationalistic, revanchist, nihilistic) practiced by conservatives, and why the narrative-based approach is so much more effective when it comes to politics, where reality and facts have never really been effective tools. Though I had not intended it this way, the Duncombe does seem to be a good follow-up to the Anderson.

In writing news, I haven’t done much, though I am assembling a few poems for an open mic night coming up in a few days. This will be my first time reading in public in at least four years, and possibly closer to five. Yes, I’m a little nervous.