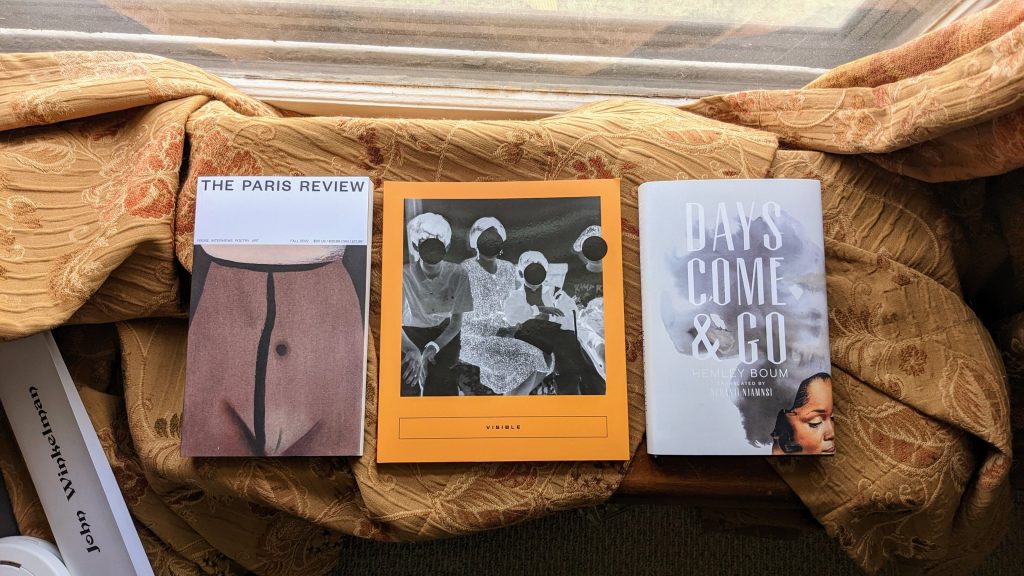 I don’t know if it is because of collective delusion, or that schools are back in session, or that the zeitgeist is one of collective acceptance/resignation, or simply that I have had a few good nights of sleep this month, but the overall vibe in my life is that things seem to be returning to normal, or at least normalizing around whatever *gestures around at everything* is. Which is to say, at least temporarily, I seem to have found my groove.

Three new books and book-ish things arrived at the house over the past week.

First up is the new issue of The Paris Review, which is likely the last issue I will receive as I continue to let all of my current subscriptions lapse.

Next up are two books from Two Lines Press. The first is Visible, an anthology of poetry and prose in translation, accompanied by some beautiful photographs and artwork. The second is Days Come and Go, written by Cameroon author Hemley Boum and translated from the French by Nchanji Njamnsi.

In reading news, I finished Shadows of Ivory by T L Greylook and Bryce O’Connor. It was good! I gave it 4 stars on the usual sites, though I though it more worthy of 3.5 stars, but when in the middle, always round up. Now I can hold my head up when next I encounter one of the authors and request a signature.

Following up that 400+ page doorstopper of a book, I started and finished the 130-page-long The Convent of the Pure by Sara M. Harvey. I received this a while back as part of my subscription to the catalog of Apex Book Company. It was a light but fun fantasy read. In fact, I finished it in a little over a day of reading, and then read the entirety of its sequel The Labyrinth of the Dead in a single day.

Now I am reading Abahn Sabana David, written by Marguerite Duras, and translated from the French by Kazim Ali. I received this book several years ago as part of my since-lapsed subscription to Open Letter Books. Though only a few pages in already it reminds me of Waiting for Godot, which makes sense as the cover blurb specifically calls out Samuel Beckett.

And my pile of unread issues of The Paris Review is down to the single digits, which means, unless things go sideways over the next two months, I will definitely finish the stack before the end of the year.

In writing news, I have started worldbuilding for two stories I wrote a while back, each of which will work better as full-length books. Each is in its own world and therefore I have two folders created and two sets of characters, histories, maps, names, descriptions, etc.