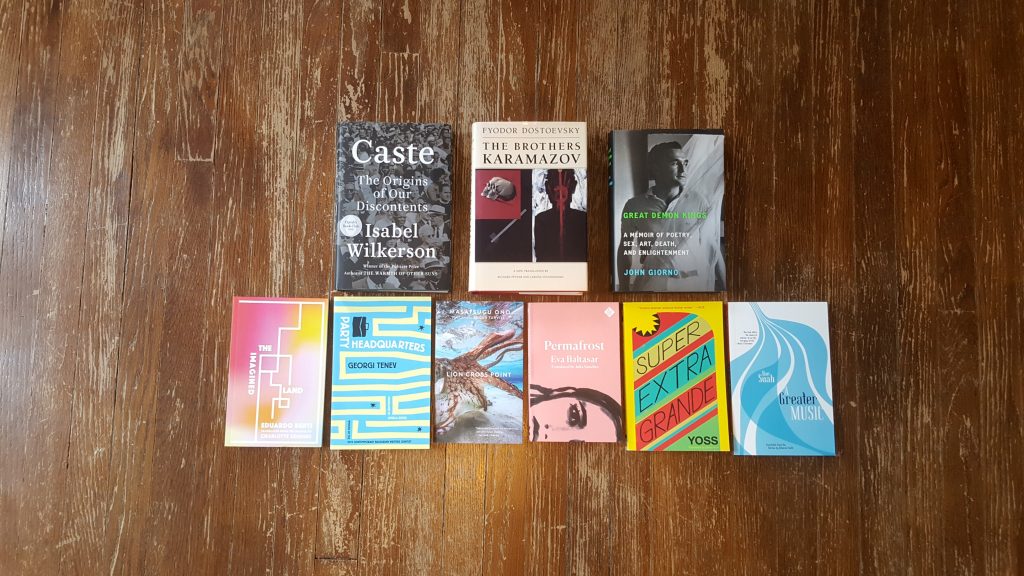 I have finally done it.

After about 25 years of trying and failing, I have finally completed reading all 364,000+ words of The Brothers Karamazov. It was magnificent, and difficult, and dense and occasionally fragmented, and absolutely worth the time and effort I put into the seven weeks it took to read the book from the beginning to the end.

With Dostoevsky out of the way for the moment, I turned my attention to the embarrassingly large stack of books in translation I have collected over the past half-dozen years, but not read. Items 7 through 12 on the book list below are the results of that first pass. These shorter, non-Dostoevsky books just seem to fly by.

Because I have been reading so many books, my short fiction reading has sort of fallen by the wayside. Still, a dozen or so in a month is pretty good.

Today is a grand day! My short story “Occupied Space” was just published in issue 4.1 of Coffin Bell, a “journal of dark literature”. This my first unsolicited prose piece which has been published since, well, ever. I have had a few things published here and there over the years, but they were always requested in advance. So this is kind of a big deal for me.

“Occupied Space” started during NaNoWriMo 2018 as “Crossing Zones”, one of a dozen or so short stories I wrote in lieu of 50,000 words of a novel.

I submitted the story to several venues before and after sending it to Coffin Bell back in late January of 2020. Not expecting it to get picked up, I submitted my story at the $10.00 tier in order to receive editorial feedback. 2020 became kind of chaotic after January, and I lost track of my submissions until September, when I realized I still had one outstanding. I sent a note requesting a status update, and in early November I received notice that “Occupied Space” had been accepted.

The editors also sent their notes, which amounted to a couple of pages of bullet points which were immensely helpful even after the fact, because how we write one thing is generally, in a technical sense, how we write everything. The feedback helped me solidify some ideas I had been mulling, and now I think “Occupied Space”, rather than being a one-off story, will become part of a larger series or collection, or perhaps even the seed of a novel.

According to my trackers at Duotrope and The Submission Grinder, this submission had a response time of something over 250 days, but again, in 2020 I give everyone a free pass on everything. I’m just happy that Coffin Bell managed to stay open and in business during the Plague Times.

Reading through the Coffin Bell blog, I felt a strong sense of deja vu, particularly in this post about litmag financial transparency. Point by point I saw every problem, complication and decision we had made at The 3288 Review duplicated in another publication. I am sure if I searched the sites of a hundred other small magazines I would find 99 other posts or stories which echo this one. It isn’t easy to run a literary journal. It has to be a labor of love, or nobody would ever do it.

So please: read my story, and also read the rest of the stories and poetry in this and all the other issues. The work is beautiful and the pieces well-chosen. I will probably submit work to this venue again, after a cooldown period of a year or so.