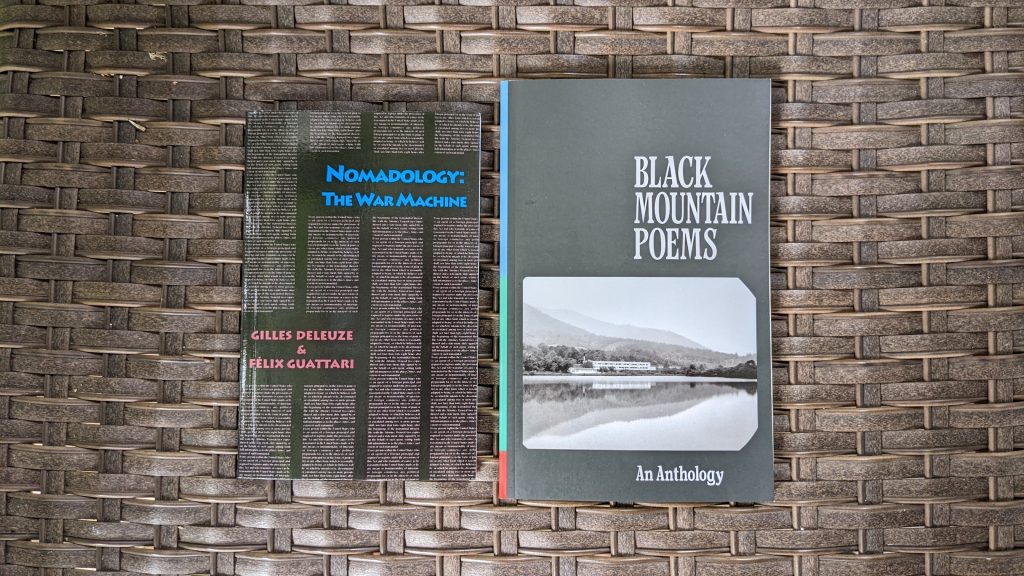 Today is the last day of my two-week break from work, the first break since ConFusion in January, and the first full-on vacation since the Christmas holidays. I enjoyed not having to work for two weeks, but the minutes, hours and days were so quickly filled with tasks, chores, and Things To Do that those two weeks included almost no rest at all. Last Tuesday I managed to get some time to myself, about three hours in which I walked around the neighborhoods, visited a cafe and a couple of bookstores, and wrote for a little while. And that was the only down-time, the only real relaxation, in the entire two weeks.

In other words, I need a vacation.

Earlier this week Zyra and I drove to Detroit, where we stayed in a moderately terrible hotel and ate fantastic food at a variety of excellent restaurants. We also, at the suggestion of one of our friends from the East Side, hit The Book Beat, a fantastic little bookstore in Oak Park, Michigan with an eclectic and surprisingly deep selection of books and magazines. Highly recommended, would visit again. While there, I picked up a couple of books:

First up is Nomadology: The War Machine by Gilles Deleuze and Félix Guattari, published by Semiotext(e). I think I owned a copy of this small book once upon a time, back in the 1990s. I am not sure what became of it. Probably lost in one of my many moves over the past quarter-century.

Next up is Black Mountain Poems, an anthology of work from the Black Mountain poets, edited by Jonathan C. Creasy. I picked this up because of my interest in the works of Paul Blackburn, specifically his beautiful “Matchbook Poem” which I return to again and again.

In reading and writing news, not much happening, because too much is happening EVERYWHERE ELSE. I did start Ana Simo‘s wonderfully strange Heartland, which arrived at the house from Restless Books a few years ago. And I’m still working my way slowly through my stack of The Paris Review, which is an absolutely wonderful experience.

I find it depressing to say that, since I head back to work tomorrow, I may finally have time to do some reading and writing. Selah! 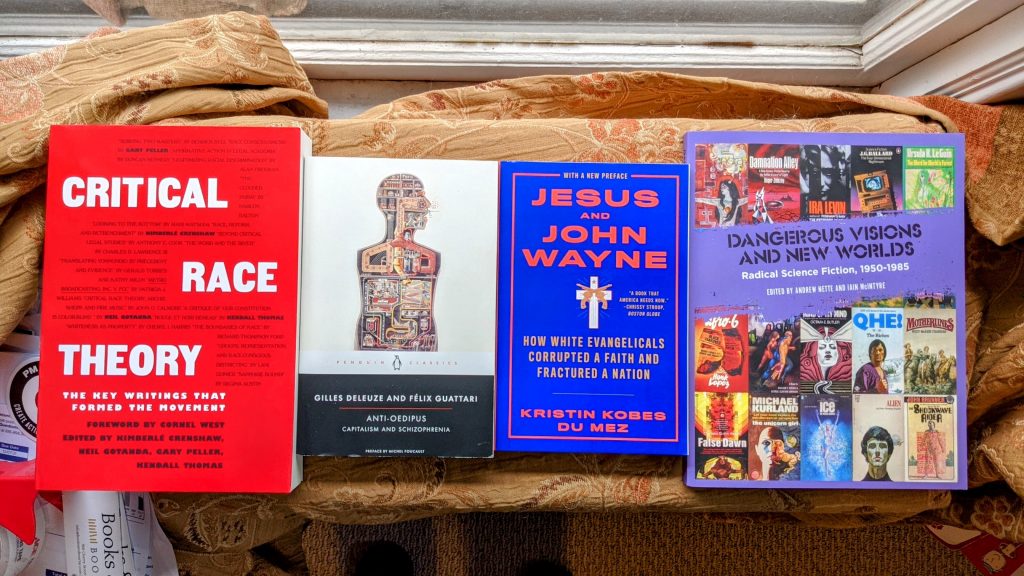 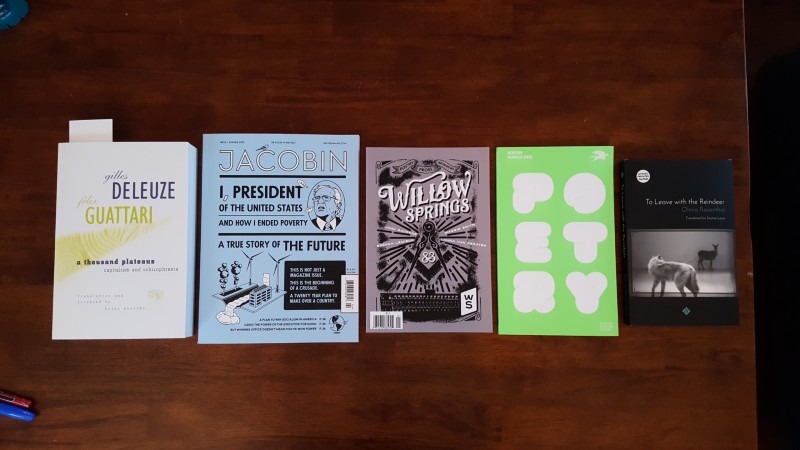 It was a quiet week for the acquisitions department here at Winkelman Abbey. But what it lacked in the X axis it more than made up for in the Y. From left, we have A Thousand Plateaus by Gilles Deleuze and Felix Guattari, followed by the most recent issues of Jacobin, Willow Springs, and Poetry Magazine. On the right is To Leave with the Reindeer by Olivia Rosenthal, the latest from my subscription to the catalog of And Other Stories.

All of which is to say, one deliberate purchase this week.

I feel like I have been orbiting Deleuze and Guattari for a very long time. Back in my Angry Young Man days in the late 1990s I amassed a collection of titles published by Autonomedia and Semiotext(e), publishers of very wild and far-out titles from a wide variety of unconventional, leftist and radical writers and thinkers. One of those books (unfortunately lost in a long-ago purge) was Nomadology: War Machine, from the chapter of the same title in the then-unknown-to-me A Thousand Plateaus. I understood very little of it at the time, but it haunted me. These were words from thinkers operating on a plane of existence so far above my own that they might as well have been performing magic.

Over the years I forgot their names but the sense of the conversations stuck with me. It felt like peeling back a layer of reality and seeing some of the inner workings of the universe.

This past summer my girlfriend and I traveled to San Francisco where we made a pilgrimage to City Lights Bookstore, which had been a goal of mine for some decades. Wow, what a store – probably the best-curated bookstore I have ever seen. The Philosophy section held scores of titles and thinkers which were new to me, or which I had only ever seen as references in other places. And of course. A Thousand Plateaus was one of them. That brought Deleuze and Guattari back into my awareness.

Shortly thereafter I borrowed Plateaus from the Grand Rapids Public Library, attempted to make sense of it, and made almost zero headway. Then I did so again, a month later. Then I resigned myself to the fact that I will be forever haunted by D and G if I did not add this book to my personal library, and so here it is.

In the reading side of things, I finished The Black God’s Drums by P. Djeli Clark this past Thursday, and absolutely loved it. Probably my favorite read of the year so far. Clark’s use of language and patois in world-building is wonderful and, though this is not precisely the New Orleans so near and dear to my heart, it is close enough to make me feel some serious longing and wanderlust.

Currently I am a little over halfway through Scarborough, by Catherine Hernandez. I picked this one up several months ago and attempted to read it while on a business trip to Las Vegas. Reading that book in that city made me want to burn everything to the ground. So I set it aside. Now that I am not in the worst city in the world I am able to read and enjoy this beautiful, heartbreaking book.