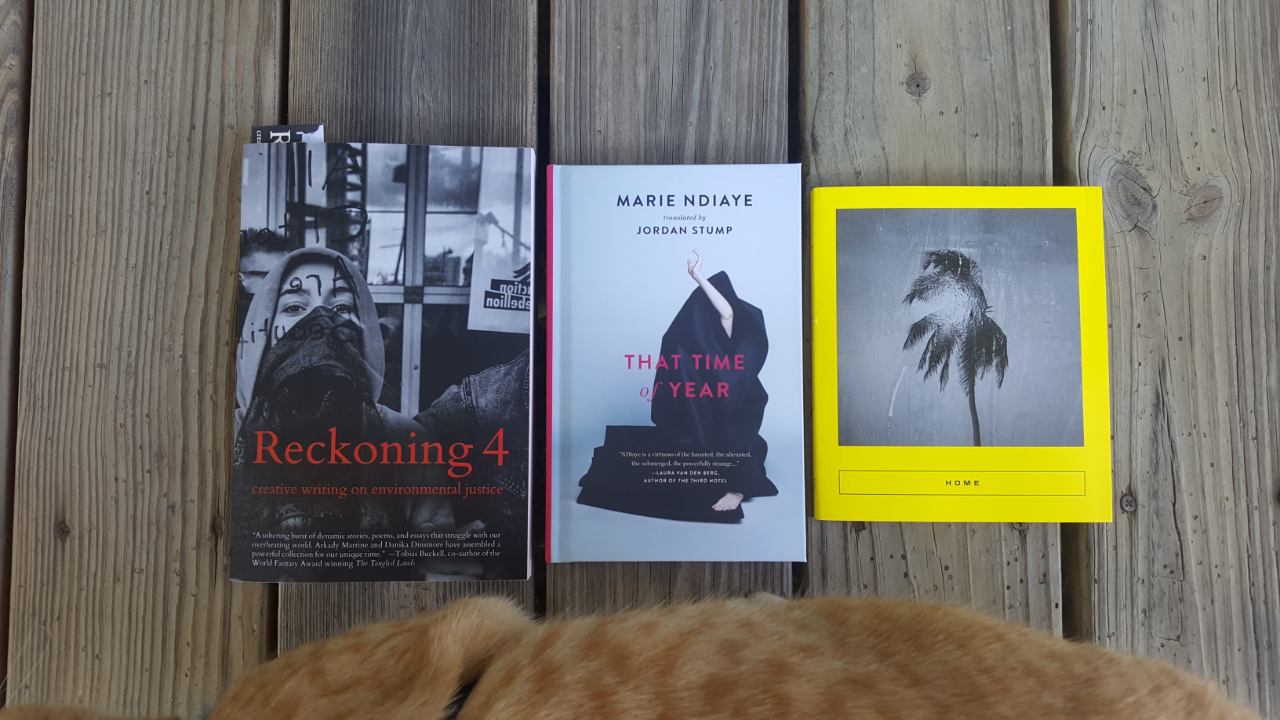 I imagine I am not the only person making that request of the universe. Though I have managed to keep myself gainfully employed through the first six months of the Plague Time I am doing my best to not take it for granted that I will still have a job come the end of the year.

To that end I continue to accumulate books against the day I find myself with a sudden abundance of free time, though on balance I would rather have a steady income, as I am in my fifties and the tech world is unkind to programmers who are not willing to work nights, weekends and holidays. And that is me. Been there, done that, not willing to do it again.

Speaking of accumulated books, the past week brought in three new volumes to the Library at Winkelman Abbey. On the left is the new issue of Reckoning, the journal of Creative Writing on Environmental Justice. The wise and wonderful Michael J.  DeLuca, who I met at the ConFusion Science Fiction Convention several years ago, is one of the founders of Reckoning, and it was he who introduced me to this excellent little magazine.

In the middle is the novel That Time of Year by Marie Ndiaye, and on the right is Home, a collection of Arabic poetry in translation, both published by Two Lines Press, a project of the Center for the Art of Translation. I keep forgetting which subscriptions I have cancelled and which are still active, so it is always a pleasant surprise when a new package shows up on my porch.

In reading news, this past week I finished The Orc King and The Pirate King, both by R.A. Salvatore, part of his long-running adventures of Drizzt Do’Urden the Drow Elf Ranger. Of the 35 books I have read in this calendar year, 18 have been books from this series, and I think I am done with the adventures of Mr. Do’Urden and company for the rest of 2020. Plus, they clash with the other books I am working my way through – The New Jim Crow by Michelle Alexander and The Making of the Indebted Man by Maurizio Lazzarito. Though the fantasy novels are fine adventures and excellent entertainment, they are very much escapist and I can’t deny a certain feeling of fiddling while the country burns when I can be educating myself about the state of the world, and the past states which got us to this state.

In writing news, I am a little over 5,000 words into my new novel. That puts me squarely in the middle of chapter 4, and just above the lower limit of progress I set for myself for the rest of the year. 5,000 words a week, minimum, until the first draft is done. In theory this is a piece of cake, as during National Novel Writing Month I occasional turned out more than 10,000 words in a day. I think my record was 18,000 in an unbroken 9 hour stint. Of course I was single at the time, and in a position where I could take a sick day when the muse struck.

I was stuck in the third draft of chapter 1 when I watched the Wizards, Warriors and Words podcast, which includes as one of its panelists Mr. Dyrk Ashton, whose books have graced these pages several times in the past. I met Dyrk at ConFusion a few years ago, and for each of us it was the first time we had met someone in real life who we had first connected with on Twitter. It was from Dyrk I learned of this podcast, and it was from his paraphrased advice from Stephen King that I made it through my writer’s block. The advice was, roughly, “You don’t need to know how the book will end when you start writing it.” So I finished the chapter and if I need to go back and rewrite it to accommodate a change in the story 50,000 words from now, so be it. I expect this book to be between 80,000 and 100,000 words when the first draft is complete.

Speaking of ConFusion – ConFusion Science Fiction Convention has been cancelled for 2021. Due to the COVID-19 pandemic, the board of ConFusion felt that it was in everyone’s best interests to table ConFusion 47 until 2022. This was a difficult decision, and the decision-makers have my sympathies for what must have been many sleepless nights arriving at this conclusion.

On the bright side, that gives me an extra year to write and hopefully get something published, assuming the world hasn’t fallen further into chaos and fascism by January 2022, and such things as creativity, optimism and hope are still allowed.