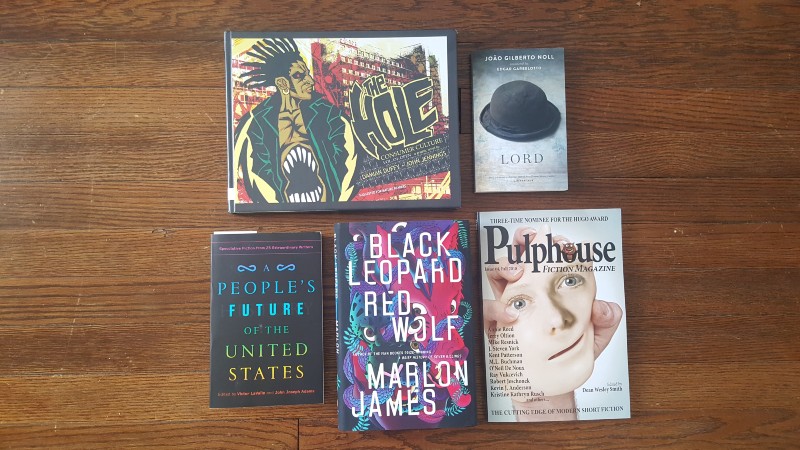 Only a few additions this week, but what they lack in quantity they more than make up in quality. First is The Hole by Damian Duffy and John Jennings, a graphic novel delivered from Rosarium Publishing, which arrived as part of the Sunspot Jungle Kickstarter reward. Next to it is Lord by João Gilberto Noll, the latest from my subscription to the catalog of Two Lines Press (part of the Center for the Art of Translation). In the bottom row we have A People’s Future of the United States and Marlon James‘ Black Leopard, Red Wolf, followed by the Winter 2018 edition of Pulphouse Fiction Magazine.

In reading news, I am about a hundred pages from the end of The Blood-Tainted Winter. I would be done, but I keep getting distracted by, well, book like A People’s Future of the United States. There are just so many good books out there, and so little time for reading.

This week brought in a couple of books which I have been looking forward to for months. Sunspot Jungle, the two-volume exclusive-to-Kickstarter hardcover set by Rosarium Publishing, arrived by mail yesterday, and they are stunning! I’ll get into the set in a moment, but first, here is the rundown of this week’s acquisitions.

On the left is the Winter 2018 issue of Rain Taxi, which I became aware of when their article about Lawrence Ferlinghetti appeared on LitHub last week. On the right is the latest book from Deep Vellum, Mephisto’s Waltz by Sergio Pitol.

I first heard of this project when Bill Campbell, owner of Rosarium Publishing, announced the Kickstarter campaign back in the early part of 2018. I supported the pledge on the first day and the rest has been a year of eager anticipation.

I first heard of Rosarium when John Scalzi posted a photo of one of his weekly stacks of new books, and in that stack was a small collection of short stories called The Assimilated Cuban’s Guide to Quantum Santeria.

That, of course, is one hell of a title.

And Rosarium is one hell of a publishing company.

In reading news, the past week was hectic, what with the polar vortex and associated schedule disruptions. I did make significant progress through Reckoning #1, and am a couple of chapters into T L Greylock’s The Blood-Tainted Winter.

In other literary news, I am back in the saddle at Caffeinated Press after a year-long hiatus/sabbatical, and am hard at work assembling the next issue of The 3288 Review.

Amazing how a schedule disruption, even one which ostensibly frees up a chunk of free time, seldom actually results in more usable free time.