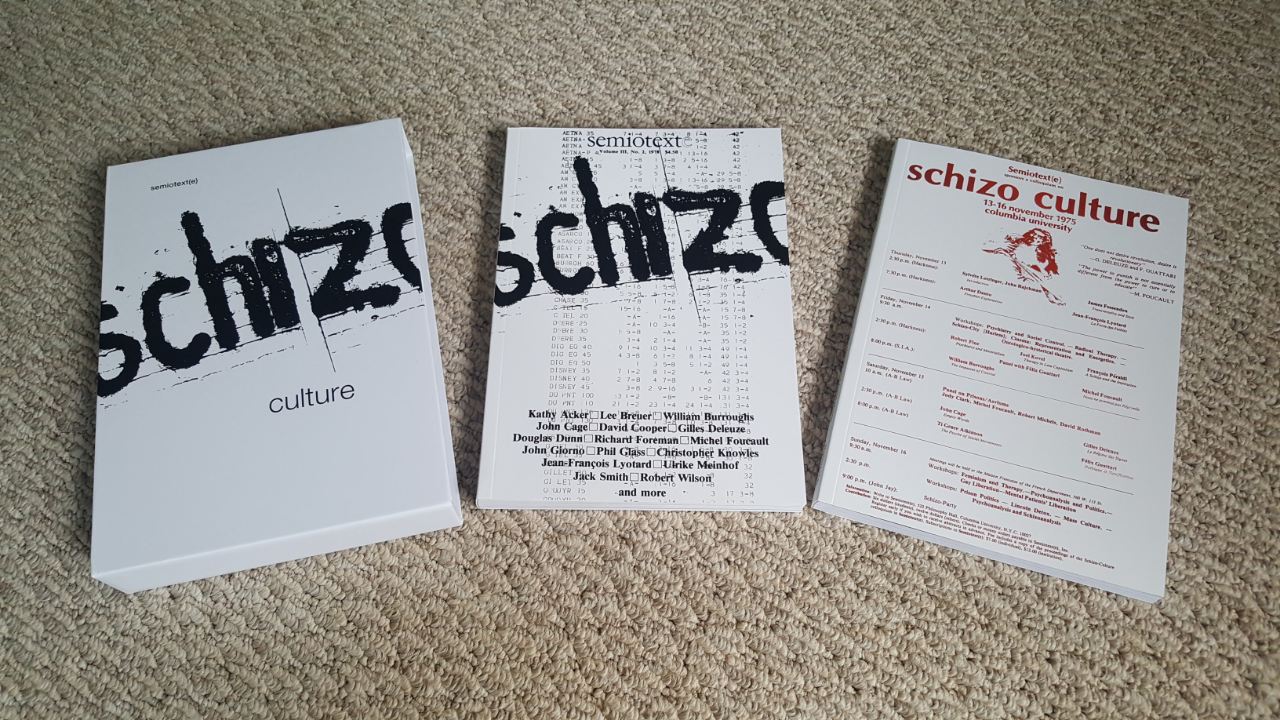 Oh, what a week it has been, with the fallout of the protest and following riot here in Grand Rapids. Note that those were two separate events with (mostly) two separate sets of people, with two entirely different agendas.

So it is appropriate that my birthday gift to myself arrived on my birthday – Schizo-Culture, a boxed set containing a facsimile of the journal Semiotext(e), volume III No. 2 from 1978 (The Book), and the papers from the Schizo-Culture conference on madness and prisons (The Event) sponsored by Semiotext(e), November 13-16, 1975, at Columbia University. I would have loved to attend, but I was six years old.

This kind of reading – decidedly leftist, decidedly intellectual, decidedly radical – puts my head in a good space for making sense of the utterly chaotic state of the world. In the past three months the COVID-19 lockdowns have increased the interpersonal and societal pressures to the point that the protests in response to the deliberate murder of George Floyd by police officers have spread around the world and show no sighs of diminishing or abating. Indeed they seem to be growing, if the news from Philadelphia and Washington, D.C. are any indication.

And I say it is far past time that the police and the police state were held to account for the increasingly right-wing, fascist state of this country, of which Donald Trump is both a symptom and an accelerant.

Given recent events and my own recent readings in capitalism – carceral and otherwise – and similar, these are timely books, and I expect many more such will come my way over the coming months.

My reading over the past week has been decidedly escapist. I am about two thirds of the way through Mike Shel‘s Aching God, a self-published fantasy novel about which I had doubts at the start, but how has me thoroughly hooked.

For writing, I am mostly journaling though when I can get my head in that space I continue to accumulate notes for the book I hope to write this summer. In fact for my birthday yesterday I wrote the first sentence, just because it seemed the thing to do.

This assumes that there will be a world left in which to publish a book when it is finished. We can but hope.