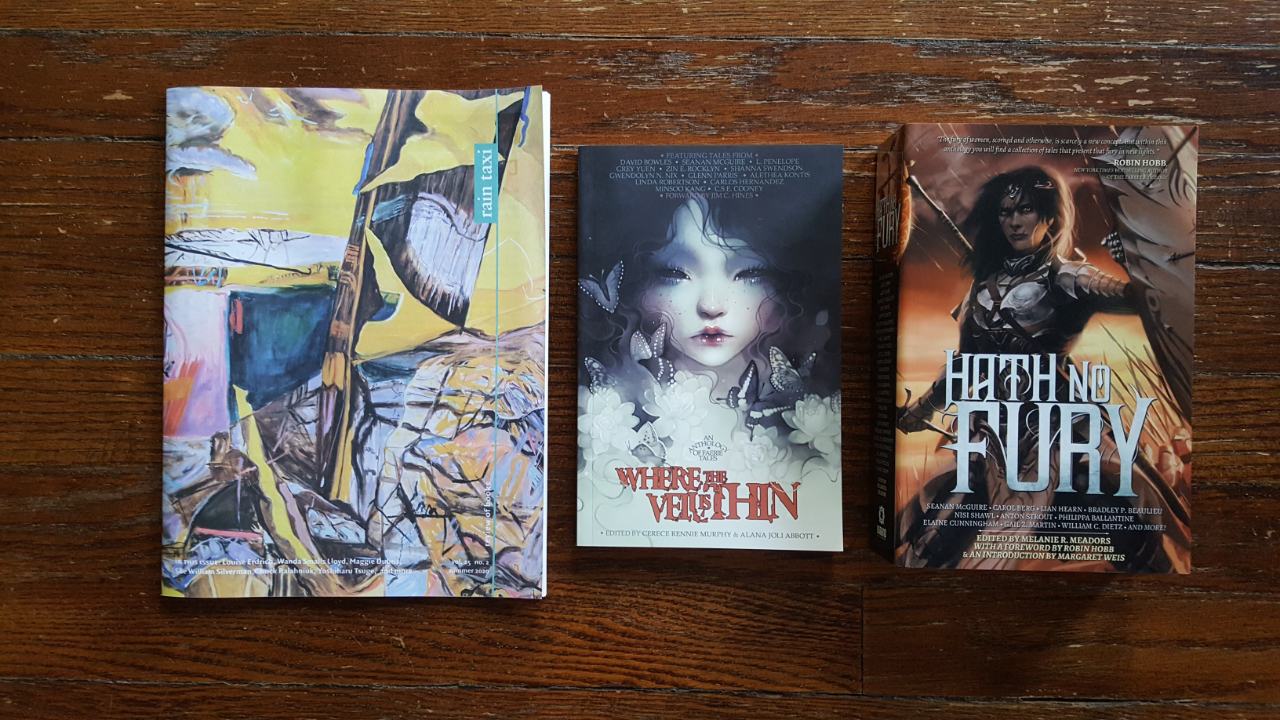 As the quote goes, just when I thought I was out, they pull me back in. The project from hell has returned for one more round. This time I will be on first shift, Monday through Friday, so I have my life back, if not my sanity. More important, I have my mornings back, when I can relax and have ample quiet time to read and write, plus or minus the attentions of one small orange cat.

On the left of the above photo is the new issue of the ever-superb Rain Taxi. In the middle is the anthology Where the Veil is Thin, a Kickstarter reward from a campaign run by Outland Entertainment. On the right is the anthology Hath No Fury, which is an add-on reward for that Kickstarter.

In reading news I just finished Orconomics by J. Zachary Pike. It was great! A wonderfully-written satire which would fit comfortably on a shelf with the Discworld novels or Terry Pratchett or the Myth Adventures by Robert Lynn Asprin. Between this and the previous read, The Sword of Kaigen by M.L. Wang, I am completely sold on the quality and readability of the finalists and winners of the Self Published Fantasy Blog-Off. I just grabbed the e-book of the 2017 winner, Where Loyalties Lie by Rob J. Hayes. I expect it will be every bit as good as the previous reads.

I still plan to start the real work of my own book this week, though with recent events, both work and otherwise, I am completely burned out and brain-dead, so I doubt I will make much progress. I have two weeks off after this week, so that should get me somewhat back on track though times being what they are, any such predictions are necessarily fragile. 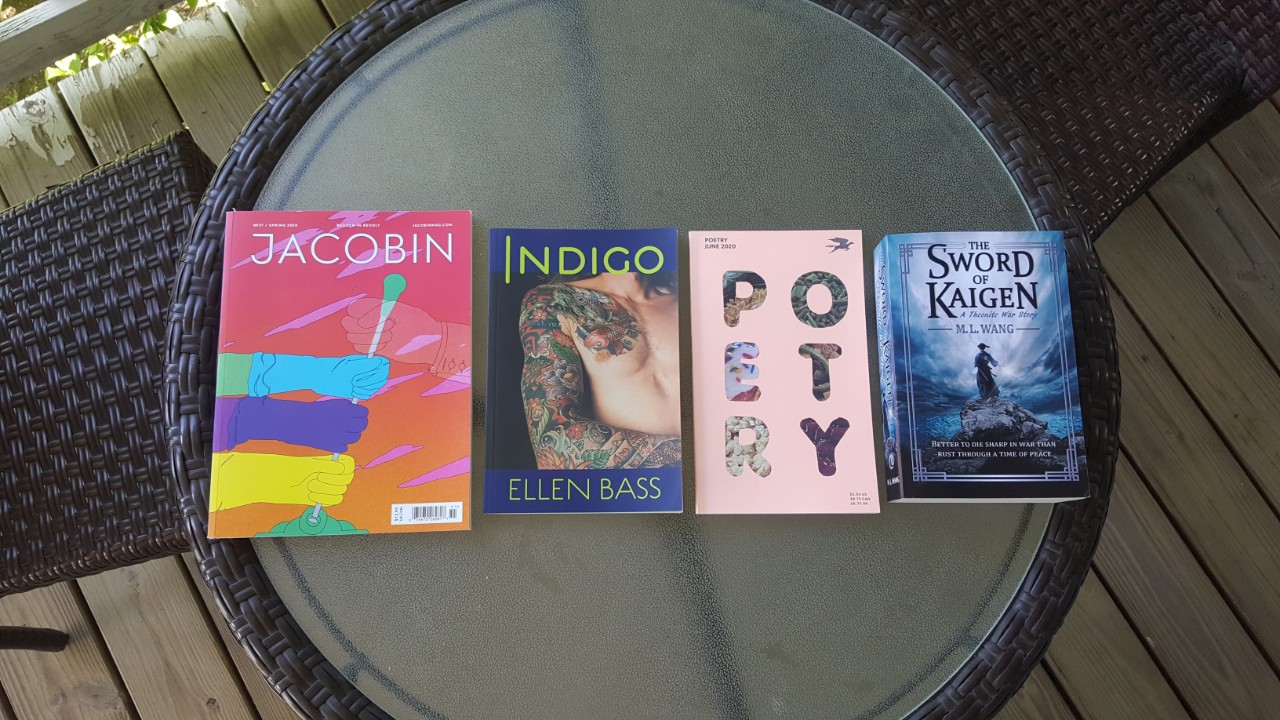 Briefly – Top left is the latest issue of Jacobin magazine, the contents of which are more and more necessary every day as Trump-instigated and Trump-led fascism comes to increasingly dominate the national discourse. Next to it is Indigo by Ellen Bass, from a Kickstarter run by the extraordinary Copper Canyon Press. Third is the newest issues of Poetry magazine, which includes a poem by local poet and professor Todd Kaneko. And on the right is The Sword of Kaigen by M.L. Wang, which I finished reading a little over a week ago. I ordered a copy of the paperback when I was about a third of the way through the e-book, as I wanted a physical copy should I ever attend a signing. It is just that good!

In writing news I am still gathering notes, research ans musings for the book I hope to begin when my hellish project at work ends in three weeks. In reading news I am a couple of chapters into Mike Shel’s self-published novel Aching God, which was a finalist for the 2018 SPFBO awards.

Some crazy shit went down here in Grand Rapids over the past couple of days, and seems set to continue for some time yet. The national guard has arrived and in addition to the quarantine/lockdown we are also under a 7 pm to 5 am curfew until Wednesday. I will create a separate post about everything so as to not mix and dilute narratives with my day-to-day life. 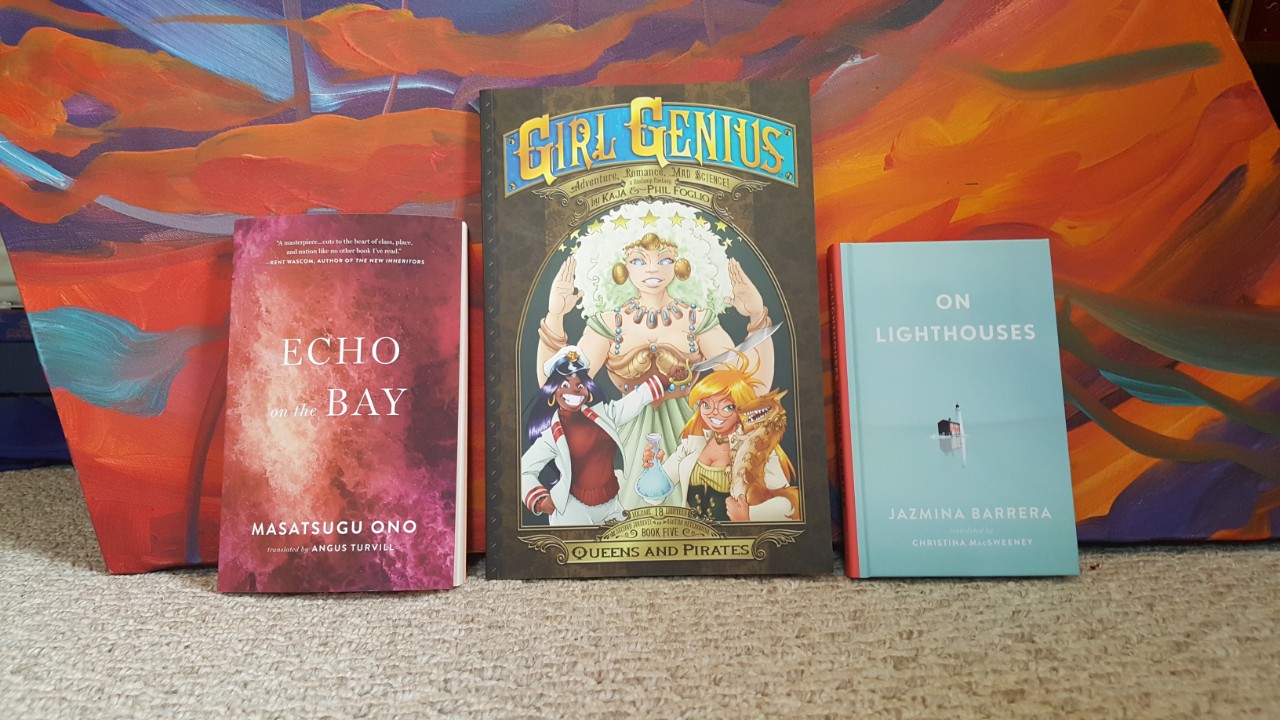