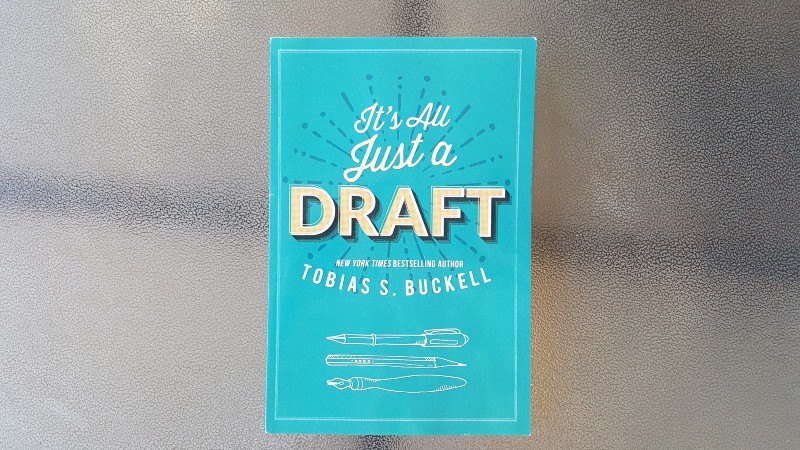 It’s been another quiet week for literature here at the library of Winkelman Abbey. The only book to make its way into my collection is the above, It’s All Just a Draft by Tobias S. Buckell. This book is a Kickstarter reward.

I met Buckell a few years back at the ConFusion science fiction convention. He is a semi-regular guest and panelist, and a fun person to talk to at the bar in between sessions. He writes some excellent books, of which my favorites are his Xenowealth series, Crystal Rain, Ragamuffin, and Sly Mongoose.

In reading news, I am most of the way through Postcards from the Interior by Wyn Cooper, who I almost met a couple of years ago at the Lost Lake Writer’s Retreat. Almost, because though Cooper couldn’t make it to the retreat, his books did, and I bought some of them. I didn’t have much time or brain-space for reading, so my poetry intake is languishing. I should be done with it today, and then on to the next one! I am also almost finished with Laurus, and should be on to the next evening read by the end of the week.

The “loss” referred to in the title of this post is, of course, the legendary Gene Wolfe, who passed away last weekend at the age of 87. I have been an on-again, off-again fan since the mid-1990s, when I first read his superb Shadow of the Torturer. I met Wolfe briefly at a science fiction convention (probably ConFusion but also possibly a different one) back in the early 2000s. I still regret not having got a book signed.

Here is a brief list of remembrances and appreciations of Mr. Wolfe.