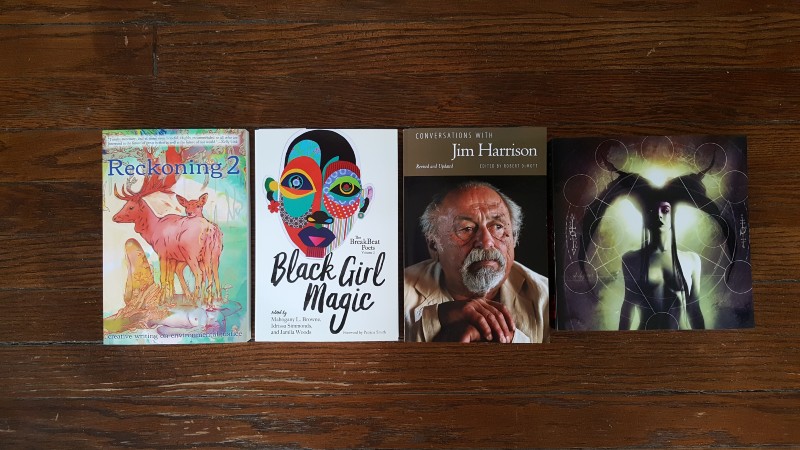 A little while ago, and for the first time this year, I sat out on my porch and wrote in my journal. The warm weather isn’t expected to last, but I will take every minute I can get.

The first week of April was another fairly quiet week here at Winkelman Abbey. I picked up four new books, three of which are new purchases.

On the left is issue 2 of Michael J. DeLuca‘s fine journal Reckoning, which publishes “creative writing on environmental justice.” I picked up issue 1 at ConFusion back in January, where I also met and shared beers with Mr. DeLuca (as well as several other excellent folks from the genre writing community).

Next is the second volume of the Breakbeat Poets anthology, Black Girl Magic. I picked up volume 1 when my significant other and I visited City Lights Books in June of 2018. I love these anthologies! They are full of powerful, important work which I would almost certainly have never encountered otherwise.

Third up is the revised edition of Conversations with Jim Harrison, a collection of interviews with the late poet and author. I picked up the first edition seven or eight years ago, and read it ferociously, writing down every book, poet, writer and recipe Mr. Harrison mentioned through several dozen interviews. This edition includes additional material up to Harrison’s death in late March of 2016.

Last up is I Am the Abyss, a collection of dark fiction novellas from a Kickstarter campaign I contributed to about three years ago. Things (as they often do) Happened, and production was delayed and further delayed. But the book has finally been released, and it is a thing of beauty! Nine novellas, each with its own custom artwork, all in a very well-produced, high-quality paperback.

In reading news, I finished The Monster Baru Cormorant at around 10:30 in the evening on March 31, thus opening the way for the stack of poetry books I am working my way through during National Poetry Month. So far I have completed the fiftieth anniversary edition of Lawrence Ferlinghetti’s A Coney Island of the Mind; Jack Ridl’s latest collection Saint Peter and the Goldfinch, and sam sax’s remarkable book madness. I am currently partway through When the Moon Knows You’re Wandering by Ruth Ellen Kocher.

Speaking of Jack Ridl, this past Friday I attended the Saint Peter and the Goldfinch book release party in Douglas, Michigan. It was a small quiet affair – Mr. Ridl and his family and over 200 of his closest friends filled the Douglas UCC Church to overflowing for a three hour event full of music and poetry and good fellowship. Jack was accompanied on stage by the superb John Shea Trio, who occasionally joined him for, as he put it, “poetry with jazz, rather than jazz poetry.”

Best of all? Jack signed my book.

It feels good to go back through the several years of publication and see the work which has inspired me to participate in the West Michigan literary community. It really feels like…home. 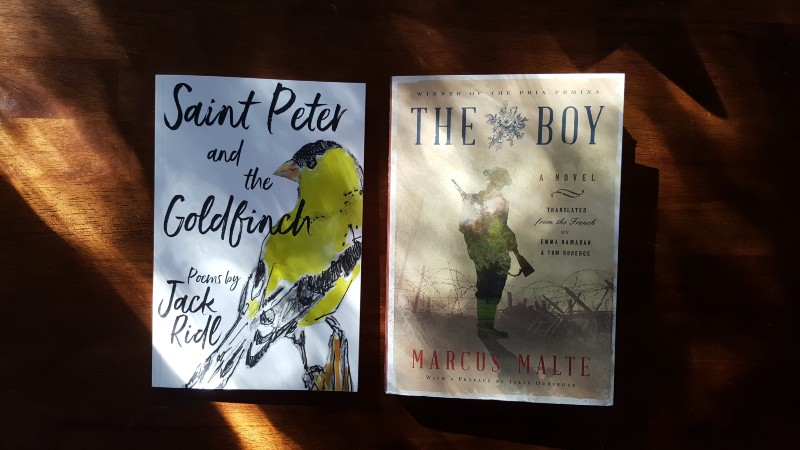