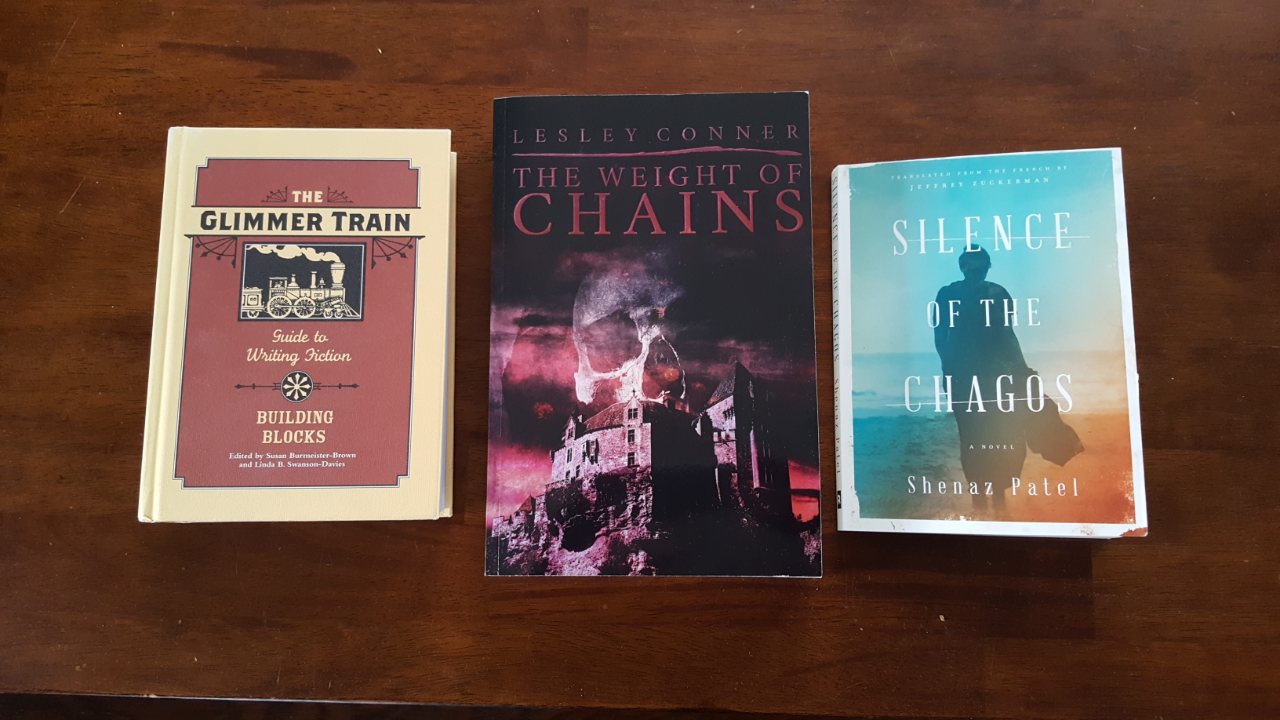 At 9:00 pm on Wednesday, November 20, I passed 50,000 words in my NaNoWrimo 2019 project titled Neighbors: A Malediction. It. Felt. Wonderful. This is by far the earliest I have passed 50,000 words in the seven years I have participated in National Novel Writing Month. This is also my fifth win. I gave myself a much-needed break and slept in until 7:30 am yesterday, instead of the customary 5:15 which arrives oh, so early as the days get shorter and the nights darker.

Now that the bulk of the writing is out of the way I have time to read and catch up with my journaling, which has fallen by the wayside these past few weeks.

Three books arrived this past week, and none the week before. On the left is volume 1 of The Glimmer Train Guide to Writing Fiction, which I grabbed from the Write616 archives scattered around the floor of the Caffeinated Press office when I stopped by to pick up a few copies of issue 5.1 of The 3288 Review to ship to a customer. In the middle is Lesley Conner’s The Weight of Chains, which I received as a surprise lagniappe for backing a Kickstarter campaign for Apex Publications. On the right is the latest arrival from my subscription to Restless Book, Silence of the Chagos by Shenaz Patel, which looks like something I might need to bump up a few tiers in my TBR pile.

I have managed to set aside a little time for reading this month. I finished both J. Michael Straczynski‘s extraordinary memoir Becoming Superman and Tobias Buckell‘s extremely helpful book of writing advice It’s All Just a Draft. I am still working my way through Marlon James’ Black Leopard, Red Wolf, and loving it more with every page. And for my night reading I just picked up Paternus: Wrath of Gods by Dyrk Ashton, which I picked up (and got signed by the author!) at ConFusion 2019 back in January. I’m only about two chapters in but it is every bit as much fun as was the first book in the series, Paternus: Rise of Gods.

For  the last week of the month I plan to add a few thousand more words to the NaNoWriMo novel to get to the end of the first draft. Of course “first draft” is perhaps overselling the novel at this point. It is really the “pre-first” or “box of scraps” draft. A thorough re-read and hefty rewrite will bring it up to first draft.

This is the first time I have completed a novel during NaNoWriMo. In the first year I came close, though on re-read there are many things about it which were problematic and will need to be changed. But perhaps at this time next year I will be able to announce that I am shopping a novel around, looking for a publisher.