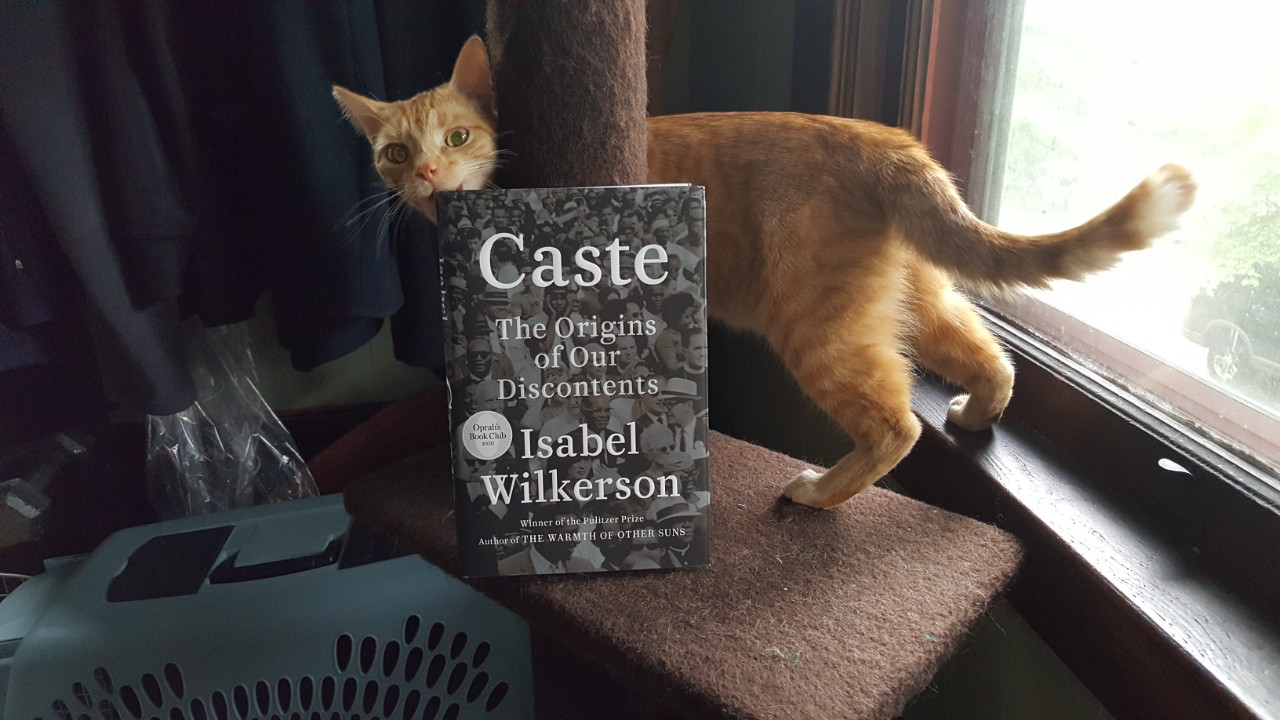 Poe can’t read, so instead she absorbs the knowledge contained in books through her face. In this photo she is enjoying the only new addition to the Library of Winkelman Abbey this week: Caste: The Origins of Our Discontent, by Isabel Wilkerson. Since I am about a hundred pages from the end of Michelle Alexander’s The New Jim Crow, where the author is digging into the meat of the permanent disenfranchisement caused by even a hint of a criminal record in this, the land of the free, Caste seems like a good next book to read. After that will either be Matthew Desmond’s Evicted or Naomi Klein’s Shock Doctrine.

In fiction reading, I just started Paternus: War of Gods by Dyrk Ashton. This is the final book in the Paternus trilogy, and though I am only about fifty pages, it is already just as good as the previous two, and according to reviews it only gets better from here. So I have high hopes.

Writing this past week went very well. I passed 20,000 words in the work in progress, and that puts me well on the way to 40,000 by the end of the month. And if I manage to continue this pace I think I should have the first draft completed before NaNoWriMo. Of course as with any first draft, the first is really the zero-eth, and after the first round of editing, then I will have a first draft. So, maybe at the end of January. I can already see places where what the characters are doing necessitate going back and changing some of the story as already written, particularly in the first two chapters. I don’t see this being a particularly long book; likely to top out at around 80,000 unless the muse strikes me with a mighty big stick.

A new follower on Twitter asked why bother to keep word count as you really just write until the story is done. This is true, and also word count is a good way to track productivity, and while the story may go on for hundreds of thousands of words, a book is by necessity finite — though a series of books is not necessarily so. It was a good question and caught me flat-footed.

Then again the poster had never participated in National Novel Writing Month, and if NaNoWriMo instills one habit in a writer, it is the fanatical tracking of word count.