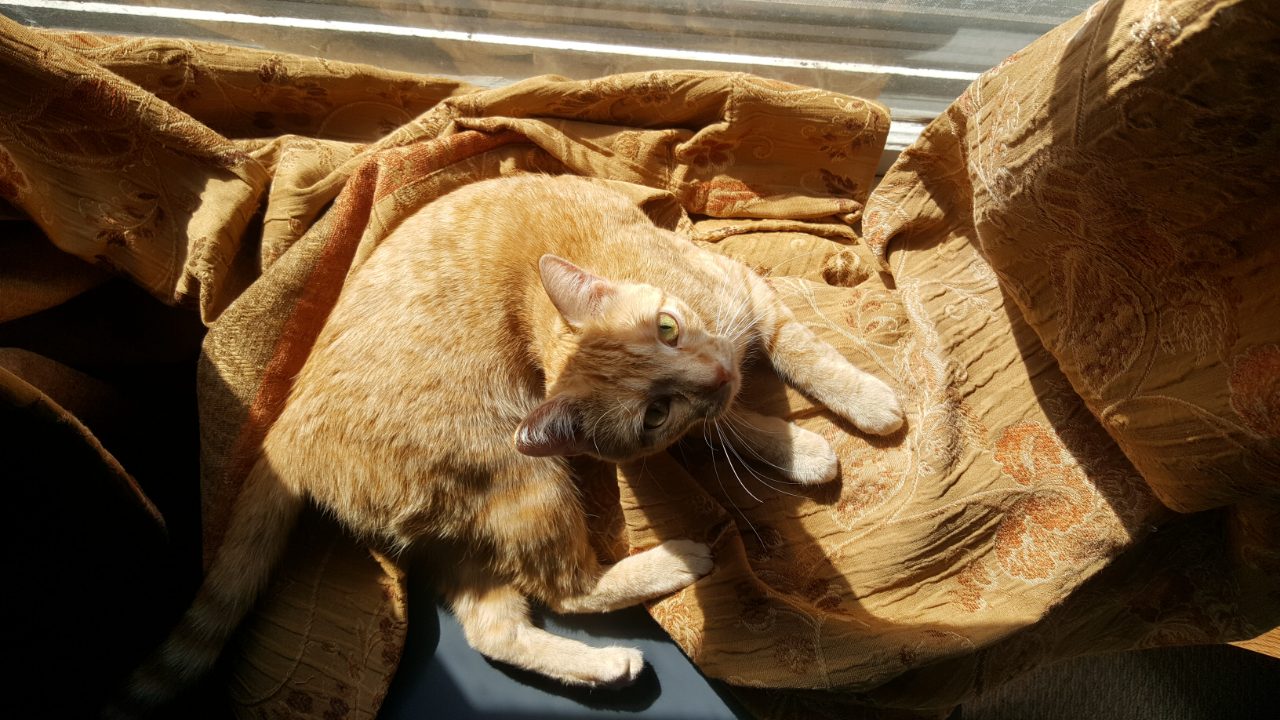 This is a photo of Poe sunning herself in a west-facing window, atop a pile of curtains which coincidentally are the same color she is. Maybe she thinks I can’t see her. That would explain why she attacked my hand when I reached down to scritch her.

We had our first truly cold nights this week, with lows in the upper 30s, Fahrenheit. We have managed to not yet turn on the furnace, but those days are coming to an end. Fortunately the rest of the month looks to be bright and sunny during the days which means my big old house will store enough heat to last us through the longer nights.

No new books arrived this week, which is happening more regularly as I regulate my book-buying habits, what with a global pandemic and employment uncertainty bringing to the forefront of my attention the necessity of frugal behavior.

In reading news I finished Michelle Alexander’s The New Jim Crow which left me feeling rage, sadness, depression, despair, and a sullen bitterness about the entrenched sadism which is one of the keystones of the American psyche. TNJC, along with Jackie Wang’s Carceral Capitalism, and the first few essays from Captivating Technology, have me further convinced that complete prison abolition is the only equitable response to the overwhelmingly racist (by deliberate intent and design) carceral state which is one of the central, defining characteristic of American society here in the post-Civil War USA.

To cool my brain, I am reading Dyrk Ashton‘s magnificent Paternus: War of Gods, which brings to a close the Paternus trilogy which Ashton began with Paternus: Rise of Gods. I am a little over a third of the way through, an I am getting to the point where I may need to take half a day from work in order to get through the rest of the book, because I seriously don’t want to put it down. Ashton’s work is just that good!

On a related note, Dyrk has a Kickstarter running right now to print the second book of the series, Paternus: Wrath of Gods, in hardcover. In addition to being excellent reads, the artwork for the books is gorgeous and the books as physical artifacts are well worth owning.

In writing news, I ended the week just shy of 25,000 words in my work in progress. I have the current scene all sketched out and the first few hundred words written, but I hit a minor bout of writer’s block which, rather than trying to muscle through, I sat back and let it run its course and accepted that it might leave me a little shy of my goal for the month of 40,000. Better a blown deadline than burning myself out doing something I love. I can always make up the word count, and the schedule and deadline are mostly arbitrary, beyond that I would like to complete the first draft before November 1.

If you are curious, here are some of the things I am researching as I write my book:

With a little luck, when strung together by a narrative framework, it will make a good story.