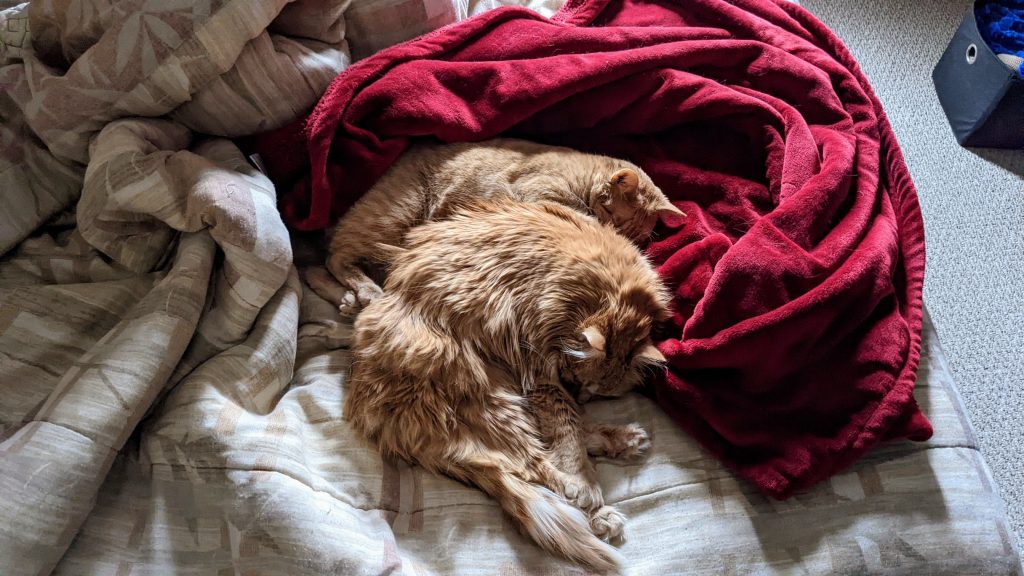 Nothing new arrived at the house this past week, so here is a photo of Poe and Pepper, napping the afternoon away.

Maybe it’s the two new years happening only five weeks apart, but it does seem that there is more energy in the air than usual for late winter. It could be the recent (very slightly) sunnier and warmer weather, but I feel something akin to how I felt in the beginning of the new semester at college, with a renewed sense of optimism and vigor.

But the powers that be at work also seem to be affected this way, because I have been exceptionally busy since the beginning of the year, and the amount of energy I am putting into my work projects is beginning to pull from my leisure-time reserves.

In reading news, I am over halfway through Jesus and John Wayne by Kristin Kobes Du Mez, which is all about how the conflation of unapologetic racism, conservative Christianity and toxic masculinity has created, and still sustains, white evangelicals. Indeed, my copy is now sprinkled with side notes like “gleeful sadism,” “white supremacy,” “rape culture,” and “death cultists.” Though I still have over a hundred pages to go, it is obvious that the main driver behind the white evangelical virus over the past century, and the very reason they support catastrophic failure of a human being Donald Trump, is “daddy issues.”

Oh: and a fair bit of “predatory self-victimization.”

But I may be simplifying thing. A bit. A very tiny bit.

In writing news, this was an editing week so I spent my time reviewing tens of manuscripts in various stages of completion, performing triage where necessary, and making good use of my red pen. Though I experienced a slight lull in energy at the end of January, I am back at full strength and making excellent progress.