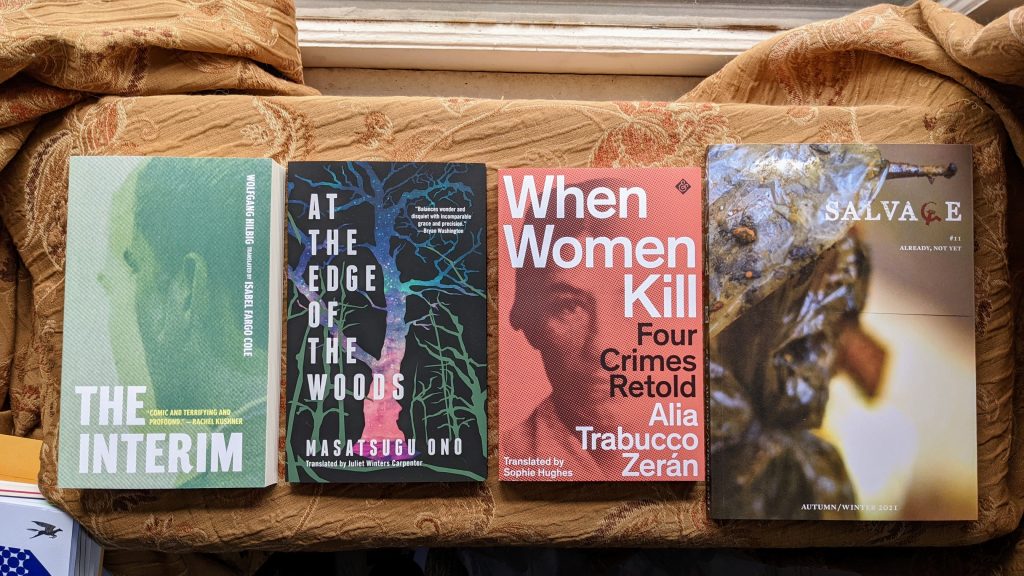 Maybe it’s because the pandemic has faded into the fabric of The Now, but there seems to be a surge in poetry events here in Grand Rapids. Several venues are hosting readings and open mic nights, and new events seem to be popping up every day. it could be confirmation bias, but I feel like the next few months are going to be quite exciting, poetry-wise.

Several new books made their way to the house in the past week.

First up is The Interim, written by Wolfgang Hilbig and translated from the German by Isabel Fargoe Cole. This is a repeat of sorts, as I received the limited edition hardcover of this book from Two Lines Press back in November.

Next up, also from Two Lines Press, is Masatsugu Ono’s At the Edge of the Woods, translated from the Japanese by Juliet Winters Carpenter. Ono previously graces these pages when I received (and read) his excellent Lion Cross Point.

Next, from And Other Stories, is When Women Kill: Four Crimes Retold, written by Alia Trabucco Zerán and  translated from the Spanish by Sophie Hughes.

And last up is the most recent issue of Salvage which, despite being on the right side of the photo, is the left-most of my reading material lately, if you get my meaning.

In reading news, I am quickly working my way through my stack of unread issues of Poetry Magazine.

In writing news, I am keeping up the pace of a poem a day, and some of them have promise, though to achieve the promise of that promise will take more than a little editing. So it goes.