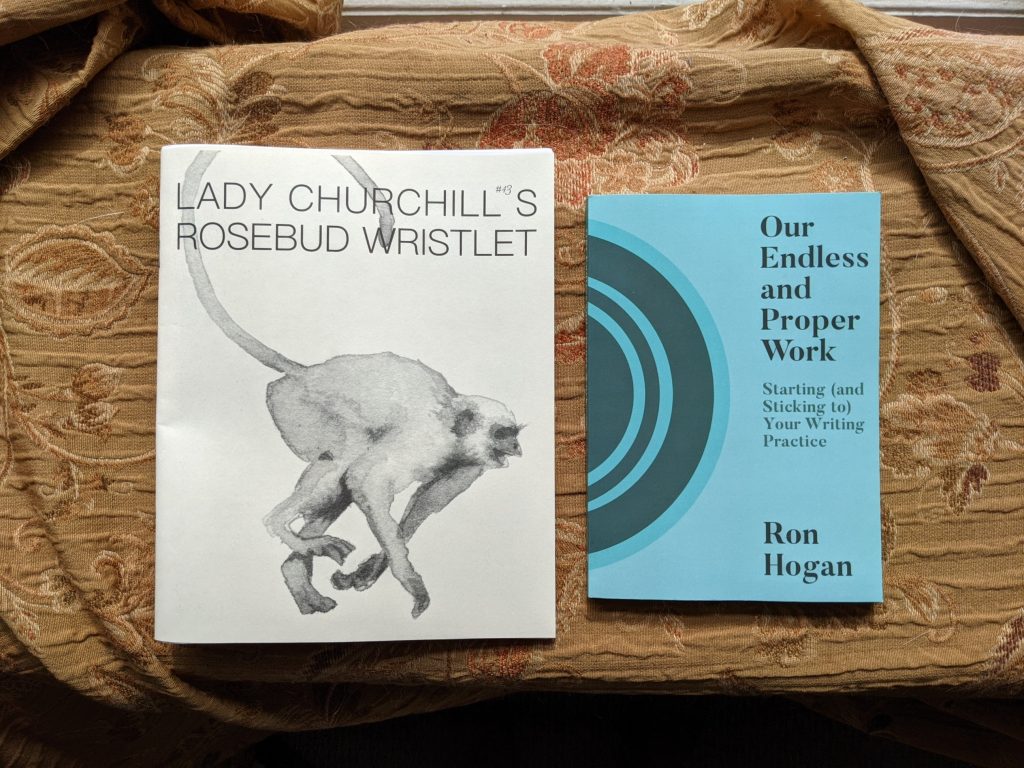 We have been dealing with a drought of sorts for the past month, and in the last couple of days the weather patterns have stepped up to correct that imbalance. The cooler air has been nice, though it has brought with it some extremely humid days, which have reminded me of early spring in New Orleans. And that has brought with it a specific melancholy, as I have not been to New Orleans since May of 2009, when my father died. I have promised my girlfriend that we will take trip down south one of these days so she can experience the city before it is permanently underwater.

Humid, stormy days dampen down the motivation to do much of anything, so even simple tasks are difficult, as if undertaken after a strenuous workout. And difficult tasks are, well, more difficult. And make necessary frequent naps.

One magazine and one book arrived here last week.

On the left is the latest issues of Lady Churchill’s Rosebud Wristlet, the literary journal published by Small Beer Press, a company which consistently turns out some of the best writing by the best authors in the business.

On the right is Ron Hogan’s new book Our Endless and Proper Work, which I purchased on impulse after seeing it in one of John Scalzi‘s regular round-ups of the books and ARCs which arrive at his house every week. I admit I have not heard of Hogan, and that I purchased the book mostly because it was published by Belt Publishing, a company which also turns out excellent writing, centered around authors and cities in the Rust Belt region of the American Midwest. At a quick glance he appears to be quite a good writer, with good advice for writer.

In reading news, I finished both The Cybernetic Hypothesis and Son of a Liche. To clear my head, I have started re-reading Jim Harrison‘s magnificent Dalva, a book which I return to every few years when I need to reset my mind in a specific way.

Reading Harrison also helps to prime my mind for writing, and right now I need all the boosts I can find in order to get my head back into that space. Already the year is half over and I have not written any prose of substance since the first week of last November. More than six months, and though I have about three dozen new poems, that isn’t much to show for 200 days.

Time to get to work.