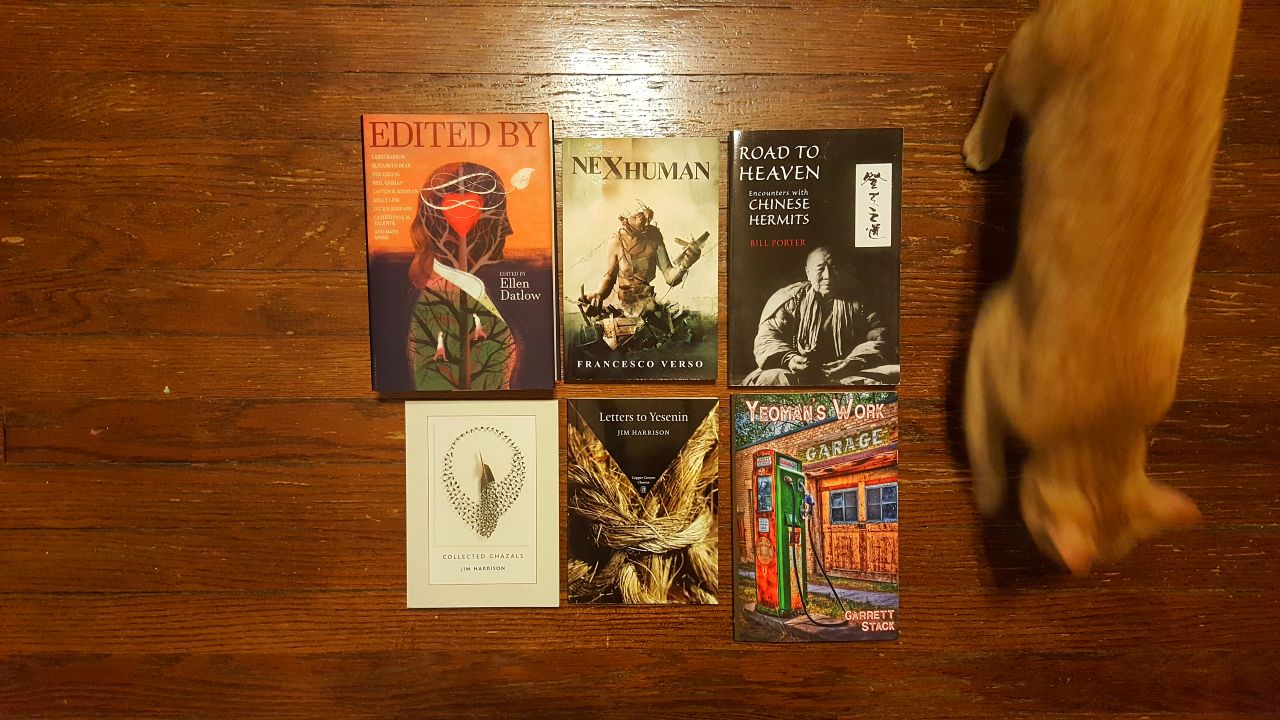 One of the advantages, if you can call it that, of working at home in the Days of COVID is that I can see the day-to-day progression of the diminishing daylight as we move from the autumnal equinox to the winter solstice. When I close down my laptop at the end of my shift the sun is just a little closer to the horizon, the light a little more golden – or red, depending on the drift of smoke from the west coast. And each day it is just a little more difficult to pull myself from bed early enough in the morning to complete my morning routine.

Two things are helping keep me on my game as winter approaches: Poe, who still insists on being fed at 5:00 every morning, and a large stack of poetry books and chapbooks to read through as part of the Sealey Challenge. I am managing to stay on schedule, mostly thanks to a large pile of unread chapbooks which have arrived over the past four years as part of my subscriptions to Horse Less Press (currently on indefinite hiatus) and Ugly Duckling Presse, which is still going strong though I had to let my subscription lapse for financial reasons. I note that traditionally the Sealey Challenge has run during the month of August, so next year I will align myself with the rest of the poetry universe and complete the challenge in the appropriate month.

In the top middle is Francesco Verso‘s Nexhuman, the latest delivery from Apex Book Company, to which I have a subscription through Patreon. Editor Jason Sizemore was kind enough to reach out to me when the original print run for this shipment ran a few short and he allowed me to pick any title from the Apex catalog. This was my first choice, and it was fortunate they had copies in stock, as I am slowly picking up every book Apex has published, thanks to Patreon, Kickstarter, and purchases at various ConFusions over the past several years.

On the top right is Road to Heaven, Bill Porter‘s beautiful travelogue/story of wandering the mountains of China looking for the Buddhist and Taoist hermits who maintain a tradition once much revered in Chinese culture.

Bottom left is The Collected Ghazals by the late, great Jim Harrison. Copper Canyon Press recently released this collection, as well as the book in the bottom center, Letters to Yesenin. I have been a fan of Jim Harrison since a college professor turned me on to him back in 1993, when he picked up a copy of Wolf. Since then I have read almost everything Harrison wrote, and have bookshelf dedicated to his poetry and prose.

On the bottom right is the new collection from Garrett Stack, Yeoman’s Work. I first heard of Stack when we published a few of his poems in an issue of The 3288 Review. This is an excellent collection, and well worth seeking out.

In reading news, I have so far read 18 poetry books and chapbooks, and am keeping a running tally of the list up on Instagram and Twitter. I haven’t taken a deep dive into poetry like this since the late 1990s, unless you count the thousands a year I read as editor of The 3288 Review, which is not really the same thing. The Sealey Challenge has been a wonderful experience and with 13 more books to read my mind will be in a wonderful place when NaNoWriMo starts on November 1.

I just finished reading For Exposure, Jason Sizemore’s brilliant history of Apex Publications, with contributions by half a dozen or so of the editors and other contributors, employees and supporters of his wonderful company. I picked up For Exposure at ConFusion back in, I think, 2015, when I managed to spend a few minutes talking to Sizemore about the trials and tribulations of running a small independent publishing company. He is a Righteous Dude, as the kids say these days, and I offer all the kudoes to him and his team for the work they do in the literary world.

Writing hasn’t been going as well as reading, though I managed to put down a couple hundred more words in the book as I try to work through this one lynchpin chapter and scene, from which the rest of the book will flow, which tells me I may need to just mash my fact against the keyboard until something clicks and I can move ahead. The goal is still to complete a first draft this year, and with luck even complete the draft during NaNoWriMo, though I am having more and more concrete thoughts about a series of short stories which might eventually become chapters in a new book. All I know is that I will spend a lot of time writing in November 2020, assuming the slings and arrows of the mundane world allow me the mental space and emotional clarity to do so. 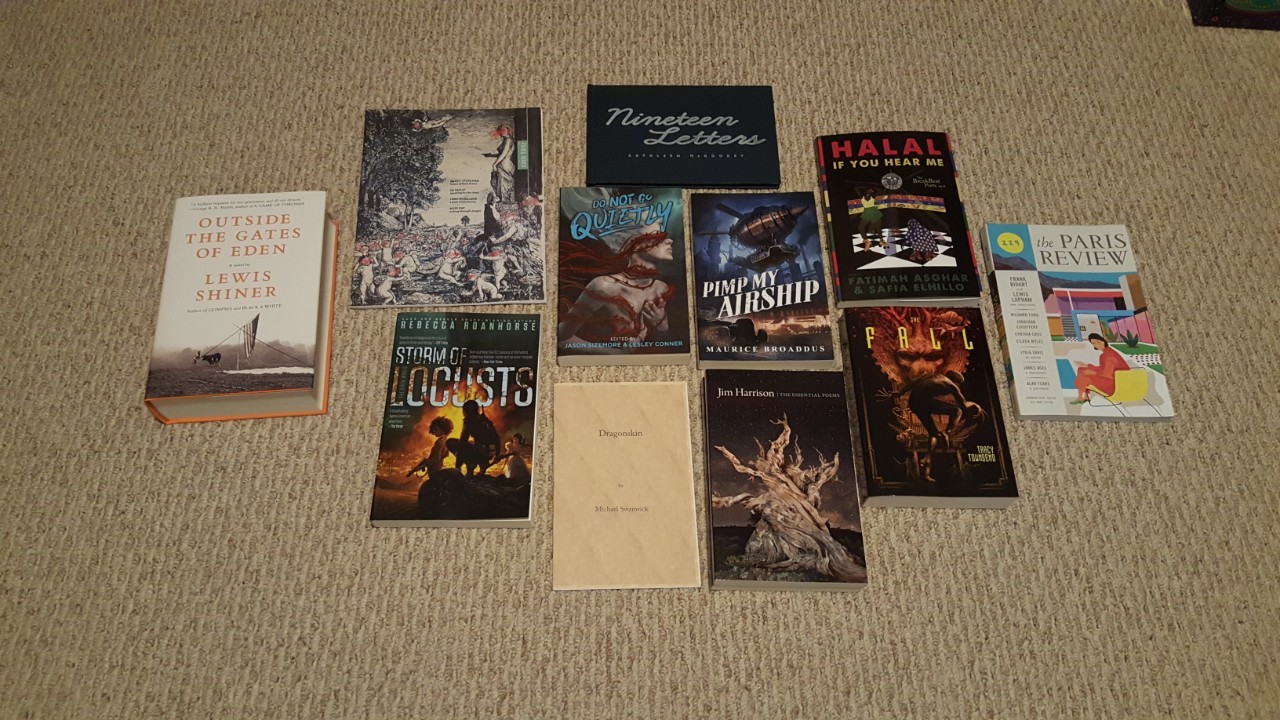 It’s been a stressful couple of weeks here at Winkelman Abbey, so I buried myself under a new pile of books. Between family, class, Caffeinated Press duties and work, I haven’t have any time to decompress, other than spare moments with my girlfriend at the beginning and end of the day. So my brain has unravelled a bit and lost some data.

If you are looking at this post through an Esper you will see that there are two copies of the Jim Harrison book. I was so distracted by events I ordered a copy from the publisher, then went out and bought a copy at Books and Mortar. When the publisher copy showed up in the mail I was both confused and elated, because multiple copies of a collection of Jim Harrison’s poems is inarguable a Good Thing.

(Plus, to crib a joke from My Blue Heaven, I might want to read it more than once.)

Starting from the left side, going clockwise around the circle, first is Outside the Gates of Eden by Lewis Shiner. I have always been fascinated by events which seem to be the nexus or apotheosis (or both) of cultural movements, and Woodstock is one of the most important of the post-WWII era. This will be a good autumn read, I think.

Next is the most recent issue of Rain Taxi, which I hesitate to read until I get a couple more paychecks, as the reviews therein are just that good.

Third, at the twelve o’clock position, is Nineteen Letters by West Michigan poet Kathleen McGookey. This book is gorgeous! Hardbound and composed of a variety of types if paper, seemingly random. And the poetry therein is, of course beautiful.

Next is volume 3 of the Breakbeat Poets series, Halal If You Can Hear Me, full of poetry written by Muslim women and queer, non-binary, and trans writers. If it it anything like the previous two volumes in the anthology series, this will be a helluva read.

On the far right is the newest issue of The Paris Review. Next to it, in the four o’clock position is The Fall, the sequel to Tracy Townsend’s The Nine, which was a wild ride. Probably dig into it later this summer, and will CERTAINLY bring it to ConFusion 2020 for a signature.

At the bottom right is my current day read, Jim Harrison’s The Essential Poems, newly released by Copper Canyon Press. I have probably read every one of these poems at some point over the past quarter century, but they are good to revisit.

At the bottom left is an impulse purchase, the chapbook Dragonskin from the superb Michael Swanwick.

On middle-left is Storm of Locusts by Rebecca Roanhorse, which is the sequel to Trail of Lightning.

In the middle are two new books from Apex Publications – the kickstarter-funded anthology Do Not Go Quietly, and Maurice Broaddus‘s new book Pimp My Airship.

In reading news, life has been chaotic and I haven’t read much other than a few dozen more pages in my role as a beta reader. I did finish Here: Poems for the Planet, and I offer my whole-hearted recommendation that everyone in the world buy a copy and read it cover to cover, twice. I originally planned to open some nonfiction next, but with the Harrison book it will be poetry for at least a couple more weeks.

(The title of this post is a play on the German word Kummerspeck – “sorrow bacon” – the weight gained through stress-induced overeating. Hopefully stress-induced book buying is less damaging, other than financially.)

This post is a central point where I can collect articles about, and interviews with, the American author Jim Harrison. I’m trying to keep them in roughly chronological order. One interesting effect of this is listening to his voice change through the years, and being able to hear him in my head while reading the print articles.

Between Dog and Wolf (French documentary on JH), 1993

Writers and Company interview with JH from 1994. (audio)

All Things Considered review of Returning to Earth, February 2007. (audio)

“Courage and Survival” essay by JH in Brick Magazine c. 2012.

“It Has to Come to You” – Jim Harrison discusses Theodor Roethke in The Atlantic, January 2014

“A Prairie Prologue in Nebraska” – essay by JH in the New York Times, January 2015

“The Rodney Dangerfield of Literature” – essay in The Daily Beast, February 2015

“An Afternoon with Jim” – article in The Big Timber Pioneer, October 2015

The Gospel According to Jim – article in Angler’s Journal, February 2016

This page will be updated as I find more links.