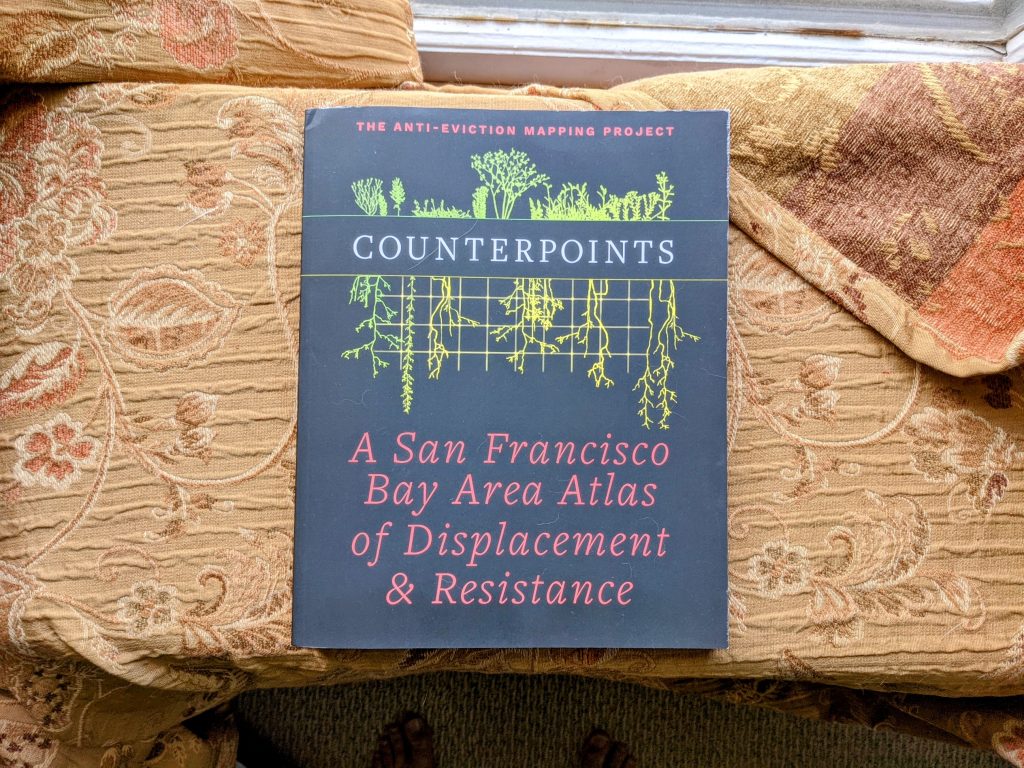 I think this is the beginning of the long tail of COVID stress in my life. Almost eighteen months in, and the new normal has let to assert itself in any permanent way. Though I have not made any plans for the autumn and winter I have let myself begin the process of becoming emotionally invested in events and plans which will now likely not come to pass. For instance, I expect ConFusion will be postponed again in 2022, which at this point seems wise, considering the spike in new cases thanks to the Delta variant and the ignorant, nihilistic, self-absorbed bumble-fucks who refuse both mask and vaccine.

Clifford Odets wrote “Any idiot can face a crisis; it’s this day-to-day living that wears you out,” but what if the crisis is the day-to-day living? And dying, of course, thanks to the previously-mentioned bumble-fucks.

The only new reading material this week is Counterpoints: A San Francisco Bay Area Atlas of Displacement & Resistance, from a Kickstarter campaign run by the always-excellent PM Press. This was a spur-of-the-moment purchase (or pledge, as it stands), inspired by our recent visits to San Francisco, as well as the ongoing news reports about the plight and treatment of the homeless population of San Francisco, and their (let’s just go ahead and call it sadistic) treatment at the hands of the powers that be. Grand Rapids is seeing an increase in the homeless population as rents rise and wages stagnate, and as more capital flows upward toward Those That Have, gentrification increases, which exacerbates the housing problem. Rinse, repeat.

In reading news, I finished both Beradri’s The Uprising and Michael J. Sullivan’s Theft of Swords. The Berardi was informative and enlightening, but seemed to lose focus in the last quarter of the book, an opinion apparently shared by others. Sullivan’s book was loads of fun from beginning to end, and I recommend it highly to anyone who likes sword-and-sorcery adventures and buddy movies, though the sorcery is minimal in this one.

In writing news, I have a small but growing stack of outlines for short stories, though no new prose to speak of. I am feeling more anxious at the though of not writing than at the thought of writing, which I suppose is an improvement. We will see how much of an improvement it is at approximately this time next week.