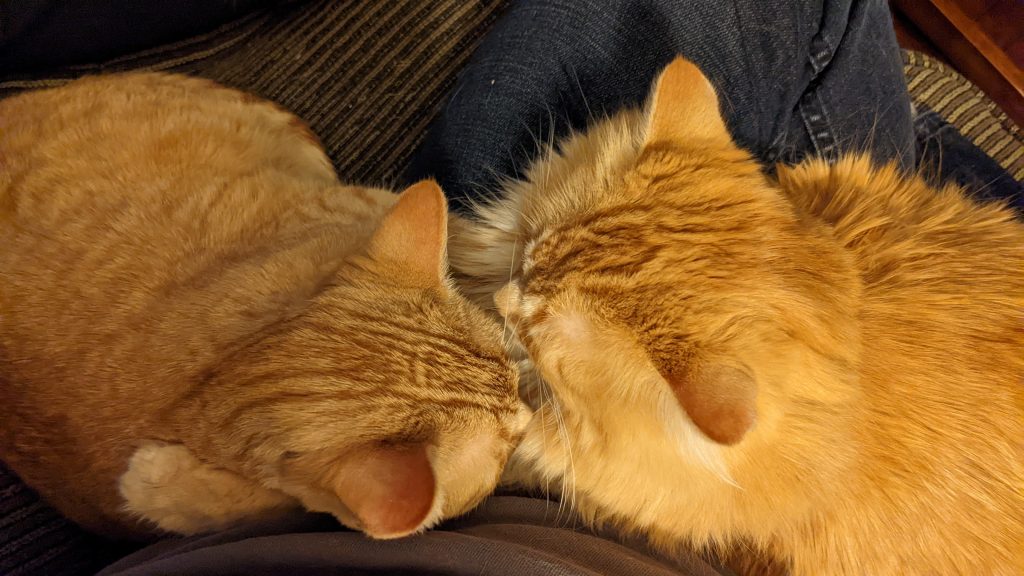 Oh, 2021 was a hell of a year. I don’t think there’s any argument there. It was certainly one of the most stressful and uncertain years in my life. The successive waves of COVID variants spreading through the world, accompanied by hundreds of thousands of deaths in the USA, and millions more in the rest of the world, made it difficult to concentrate on anything beyond getting from one day to the next. It wasn’t just that the news (as well as the “news”) was distracting; it was that in the context of a global pandemic, everything else seemed a little (or a lot) less important.

The high point of 2021, no doubt about it, was my relationship with my partner Zyra, who I have been with for a little over four years, and with whom I have been cohabiting for a little over two. We continue to find comfort and joy in each others’ presence, and are good at working through moments of stress and friction and coming out the other side, closer and stronger.

In April, Zyra officially started her business Gallafe (pronounced “GALA-fey”), making Filipino food and selling it at the Fulton Street and Holland Farmer’s Markets. She also began holding popup dinner specials on alternating Fridays, as well as the occasional Sunday brunch offering and a regular delivery to the South East Market. She has made amazing progress in a short amount of time, and this in the second year of an ongoing pandemic. I have been assisting her where I can, primarily with massages and running errands. And as of the last day of the year, she can be found on DoorDash, if you are in Grand Rapids and search for Asian food or simply “Gallafe.”

Last Christmas we picked up a new cat, Pepper, from the same Upper Peninsula farm where we adopted Poe the year before. Being from the same colony as Poe, they are related in at least one way. They are certainly cousins, though Poe might also be Pepper’s aunt, at no more that two steps removed.

As Zyra recently pointed out, Pepper is Poe’s emotional support animal. The cats have been an absolute joy, providing Zyra and I with endless entertainment and affection, and offering a release valve of sorts for our relationship, giving us other living creatures to focus our attentions on, which was vital for the long days of us having no other human interaction than with each other. Having lived with cats for two years now, I can’t imagine ever going back to a pet-free household.

Master Lee’s School of Tai Chi Praying Mantis Kung Fu and Tai Chi Jeung continued to meet throughout this past year, online from January through the middle of March, and outside at Wilcox Park in the Eastown neighborhood of Grand Rapids through the end of October. We are now holding hybrid classes, in person at From the Heart Yoga and Tai Chi Center, the studio senior instructor Rick Powell runs with his wife Behnje Masson. We have a camera set up so students who are not comfortable practicing in person can participate remotely.

I and our other assistant instructor Tracy also hold informal “office hours” over Zoom to assist students in the time between classes, which has been a big help for the remote-only students, as well as a morale booster for me, because it provides a little more human interaction, which has been sorely restricted for the past two years.

We are able to practice about 75% of our pre-COVID curriculum. Out of an abundance of caution we are forgoing most drills and exercises which involve more than incidental personal contact. We hope that this will change as we move into the new year, but with new COVID variants spreading through the country we are trying to be patient. Better to have to re-learn a few skills in a year than to be the vector for one of our students becoming seriously ill.

2021 was a good year for reading. I started the year with Dostoevsky’s The Brothers Karamazov, which I have tried but failed to complete several times of the past three decades, but this time I made it through to the end. And I ended the year with Dostoevsky’s The Eternal Husband and Other Stories, as it seemed appropriate to book-end the year with classic Russian literature. In between I was all over the place, reading genre and literary fiction, a wide variety of nonfiction, and many books of poetry. The grand total for the year was 57 books and over 120 short stories read.

Much to my surprise, considering how 2020 sputtered and ground to a halt at the beginning of November, 2021 was an excellent year for writing. I completed drafts of two short stories and over 30 poems, and am over halfway done with the pre-first draft of my NaNoWriMo book Racing the Flood Down to the Sea.

This is where 2021 was the worst. I lost four friends this year, and in early September my mother, Sharon Prine, passed away just after her 84th birthday. Surprisingly, none of them died of COVID, which shows that even in the middle of this pandemic, the mundane world is still taking its toll.

So I will go into 2022 with holes in my life in the shape of Simon, Bill, Caroline, Beth, and Mom.

I am still employed at the same company, and plan to remain here until I either retire or am made redundant. For most of the year I have been on one project, which in other years would become boring and unsatisfying, but for this year, predictability and stability are very much a good thing. And I am learning many new skills.

I am glad that 2021 is over. Though I had some small personal triumphs and accomplishments, overall it was a year full of hellish stress, and though I am resigned to the fact that whatever is going on now is likely the New Normal, I am tired of reacting to the slings and arrows, or waiting for them to find another target. If I have a  goal or resolution for the new year it is to begin digging myself out of the deep funky hole I have been in for most of the past two years.