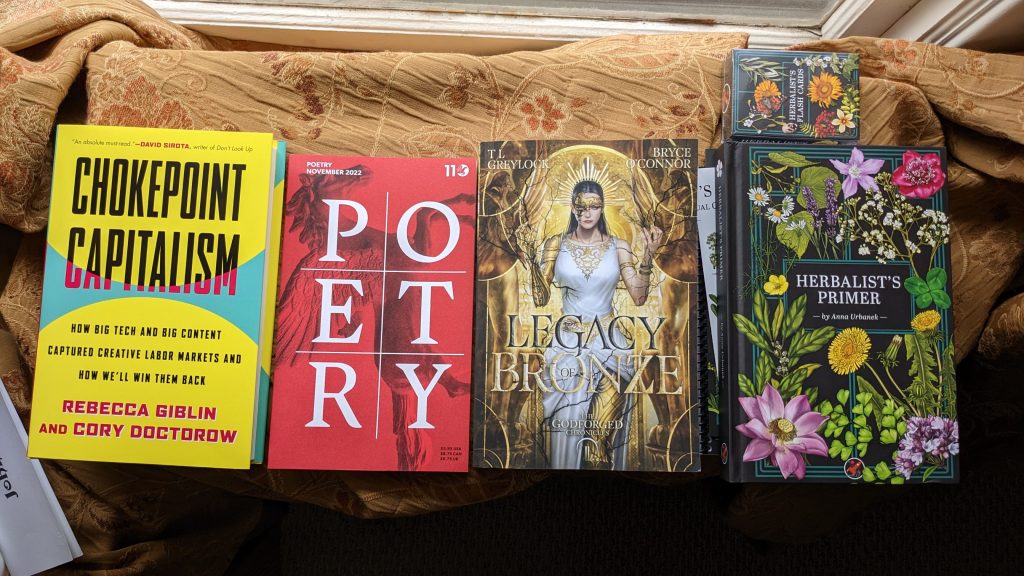 My partner was out of town for a few days, so I had the house to myself. Well, not entirely to myself. Better to say that Poe and Pepper had the house to themselves, with me furtively creeping around, making sure they stayed fed and feted, so they wouldn’t stage a coup. Not that much would change if they did so successfully.

October continues to be a stellar month for additions to the library, with several new titles arriving in the past week.

First up, fresh from a successful Kickstarter campaign, is Chokepoint Capitalism by Rebecca Giblin and Cory Doctorow.

Next is the latest issue of Poetry, probably my second-to-last as my subscription winds down.

Next is Legacy of Bronze by T.L. Greylock and Bryce O’Connor. This is the sequel to Shadows of Ivory, which I picked up at the beginning of the year and read about a month ago.

Next is one I have been awaiting for a very long time. The Herbalist’s Primer, published by Exalted Funeral, was part of a Kickstarter which I backed in September of last year. Thanks to *gestures at everything* printing was delayed many times, but the Kickstarter rewards finally arrived, and the book is beautiful!

In reading news, I am quite enjoying my journey through the pages of my stack of back issues of Lady Churchill’s Rosebud Wristlet. Such good writing in here!

In writing news, I am still plotting out the story I will write for NaNoWriMo which starts in a little over a week (!).