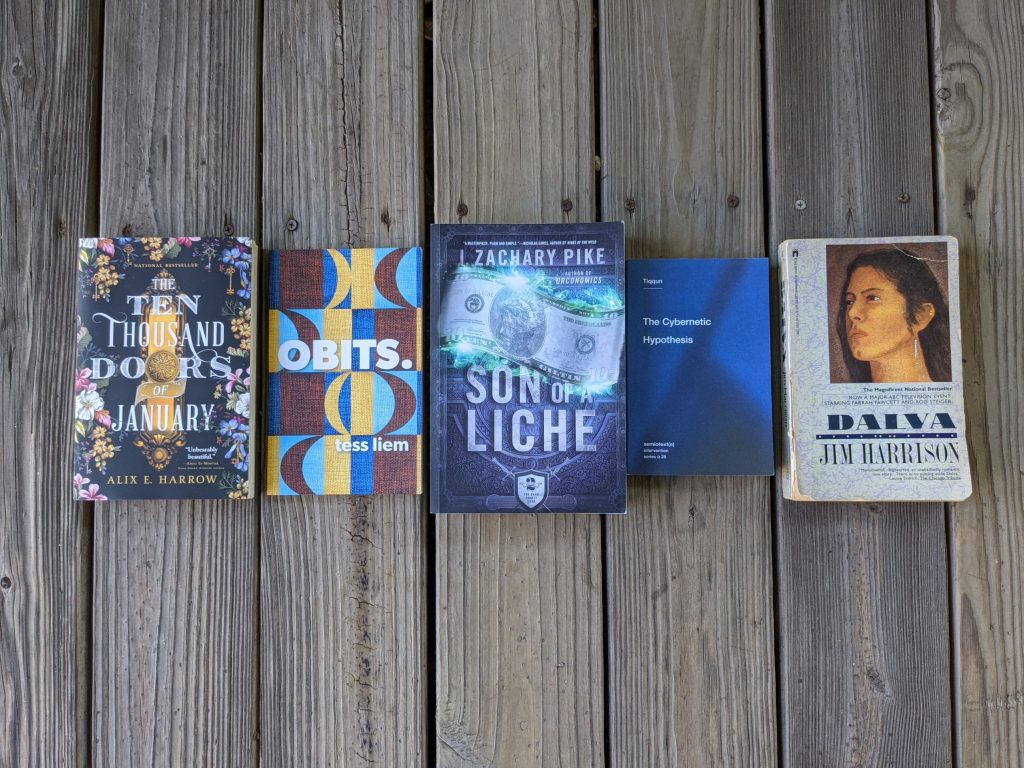 Considering how busy I was in June, this is not a bad reading list. I had a good mix of genres, with fantasy, poetry, critical theory, and literary fiction in the mix. I could have maybe snuck in one more book, but the mix of work scheduler and stress, life stress, family stress, and general burnout kept me from enjoying my free moments as well as I could have.

If you look closely, you will see that my copy of Dalva is quite worn. Both front and back covers are attached by the tiniest remnant of the original adhesive, and the pages within are quite yellowed. I purchased this copy when I worked at Schuler Books and Music, sometime around 1996 or 1997, I think. So it’s at least 20 years old. I have read it at least half a dozen times, and loaned it out twice. All the damage to the book was done by me, hauling the book on vacation and to various cafes and offices over the years. I love this book unreservedly, and will likely pick up a replacement copy sometime this year.

As with last month, I didn’t read any short fiction. This is beginning to bother me, and as I have a two-week vacation coming up, I will do my best to set aside time to correct this omission. 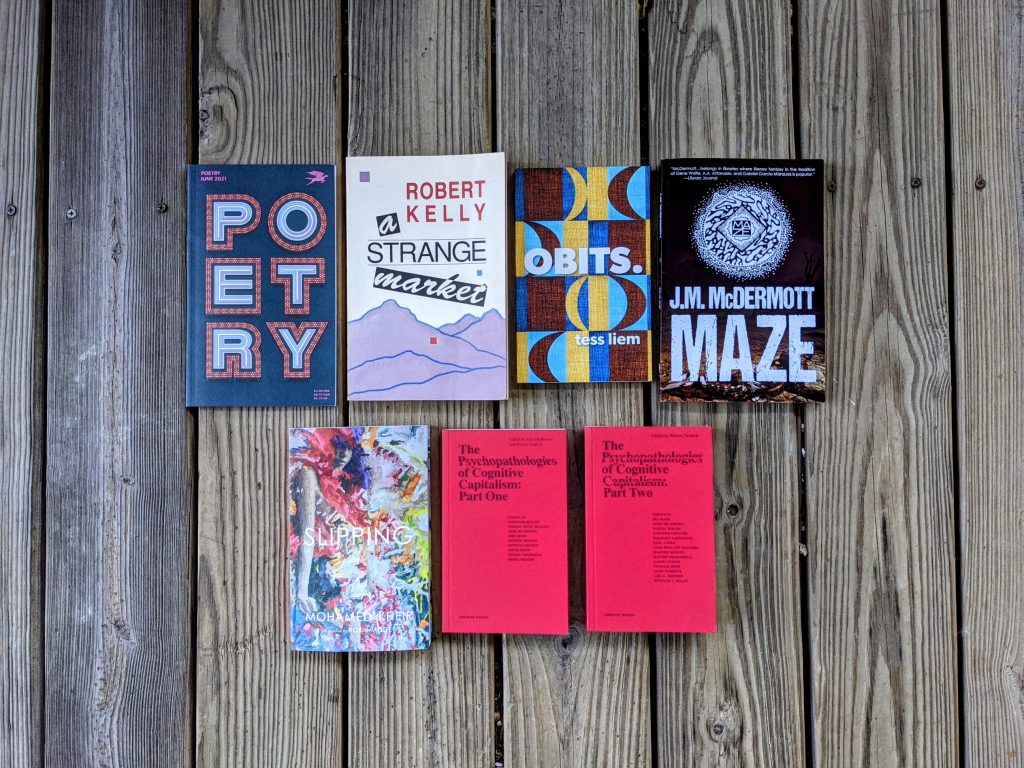 I was on vacation for the past week which, thanks to COVID, meant I did largely what I do while working, except without the working part. I did take a good long walk on Monday, from my house near downtown Grand Rapids, all the way around Reed’s Lake and back home, with stops at Argos Book Shop and Common Ground Coffee House.

It was a good week for reading material here at the Library of Winkelman Abbey.

First on the list is the latest issue of Poetry Magazine, which is soothing balm on the brain after a hard day of writing code.

Next is Robert Kelly’s A Strange Market, published by Black Sparrow Press, which I picked up at Argos at the end of my long walk. I love the old Black Sparrow books, back when they were an independent publisher rather than an imprint. The rough covers are part of the appeal and the aesthetic.

Next is Obits. by Tess Liem, which I also picked up at Argos. I had never heard of Liem, but a quick and random read of a couple of the poems herein convinced me that this would be a good impulse purchase.

Next is Maze by J.M. McDermott, from my subscription to the catalog of Apex Book Company.

Next is Mohamed Kheir’s Slipping, translated by Robin Moger, from my subscription to Two Lines Press.

And finally volumes 1 and 2 of The Psychopathologies of Cognitive Capitalism. I picked up volume 3 when Zyra and I visited City Lights Books back in summer 2018 and, since I can’t abide incomplete sets, completing the collection seemed like a good birthday present for myself.

In reading news, I finished Arkady Martines’s A Memory Called Empire and it was wonderful! I don’t remember the last book I read which had such deep and subtle political intrigue. I appreciated Martine’s use of the narrow lens of the single viewpoint character (albeit with some branches due to a very specific technology central to the plot). This kept the sense that the machinations and machinery of empire are vast and a single person can only see a small fraction or a single facet of the whole. I will need to reconsider some of my own writing in light of the experience I gained in reading this books.

I also finished Darran Anderson’s absolutely magnificent creative nonfiction book Imaginary Cities. Anderson explores ideas and the mythology of cities, and how they live in our stories, dreams and imagination, rather than the hard numeric facts. This means that Neil Gaiman will be cited next to Le Corbusier, and the stories related by Marco Polo and Samuel Taylor Coleridge will be given equal weight to the news feeds of current and historical events. Every page of this book contains passages good for multiple writing prompts, and as with Martine’s book above, but for quite different reasons, I feel I need to revisit some of my own writing based on the influences herein.

With those two books complete, I am now reading The Cybernetic Hypothesis, written by the collective Tiqqun and published by Semiotext(e). And for fiction I just started The Ten Thousand Doors of January by Alix E. Harrow. I am not far enough into either to form an opinion, but I have read enough to be intrigued and to keep going.

In writing news, not much is happening. I am slowly transcribing the thirty poems I wrote in April, and much to my surprise some of them have promise. I will probably be working on this task for the next few week as I return to work and summer distracts me with the option of being outside and away from a computer. I also started editing a literary fiction short story I wrote a couple of years ago, as part of NaNoWriMo. I think I will have it in shape to send out before the end of summer, assuming my energy level and attention span return to what they were before I received my COVID vaccinations.

One day, having the time and mental capacity to write regularly will be such a regular part of my life that it will not be worth mentioning. But today is not that day.