@courtneymilan Having flashbacks to “they didn’t die of AIDS, they died of pneumonia”

5 of 5 stars to Democracy Incorporated by Sheldon S. Wolin https://www.goodreads.com/review/show?id=3749955569 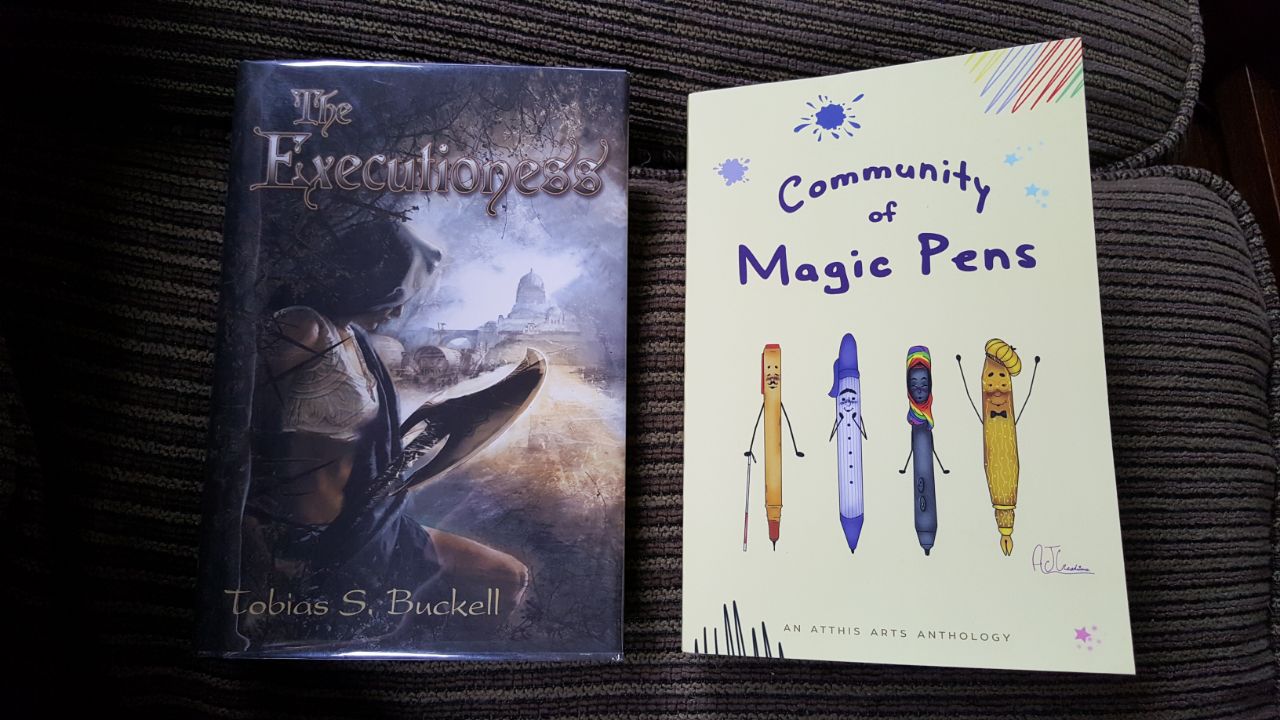 As far as months go, April 2020 wasn’t the absolute worst ever, but it was right up there. My third-shift project and the COVID-19 disruption of the world has left me in a mental and psychological space where the days are undifferentiated and blur together into an indefinite now and the hours disappear in a blink but the weeks last forever. Z continues to improve from her sprained ankle and with the warmer weather we are able to spend more time outside which, even if we almost never leave the property, is a huge improvement over being stuck in the house all day.

I’m still in something of a lull in book acquisitions, but the page of new reading material never fully stops. On the left is Tobias Buckell’s novella The Executioness, published by Subterranean Press. I picked it up after I read its companion volume, Paolo Bacigalupi’s The Alchemist (also from Subterranean Press) and realized that I was missing half of the story.

On the right is a new anthology of short stories from Atthis Arts, Community of Magic Pens. This is from a Kickstarter campaign run by E.D.E. Bell, who I know through volunteering at ConFusion. She and her team have turned out quite an impressive collection of anthologies, and are doing a great service to the writing and reading communities. 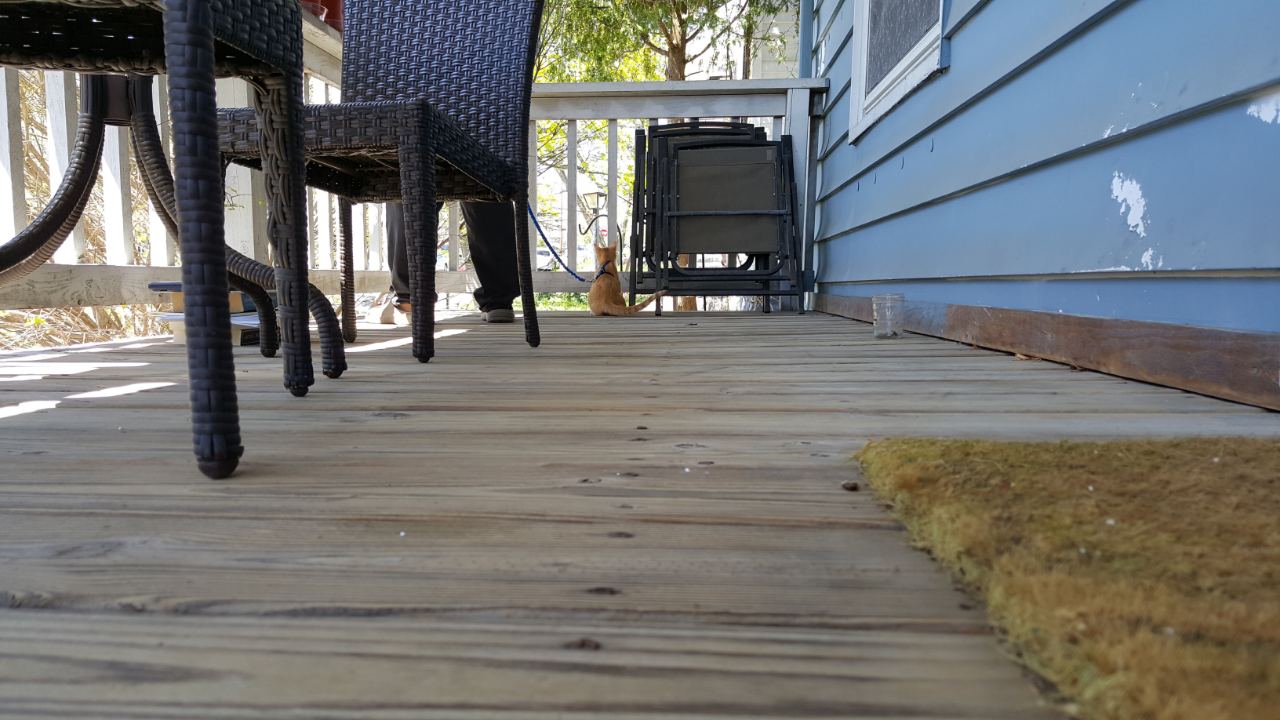 A few days ago Z and I picked up a harness and leash for Poe. She took to it immediately and seems to love being outside, though she is quickly overwhelmed by all of the sensory input and so can’t stay outside for more than about twenty minutes at a time. Her favorite activity seems to be chasing all of the flies which the warmer weather has awakened.

Perhaps May will be a kinder month than April, though with the lockdown in Michigan extending through the end of the month, and the emasculated manbabies continued protesting of the quarantine, I suspect things will get worse before they get better. Stay safe, stay distanced, and if you see a heavily armed white man complaining that a woman told him to stay in his room, offer him sympathy for his toxic daddy issues but don’t approach. They are easily frightened and tend to lash out if cornered. 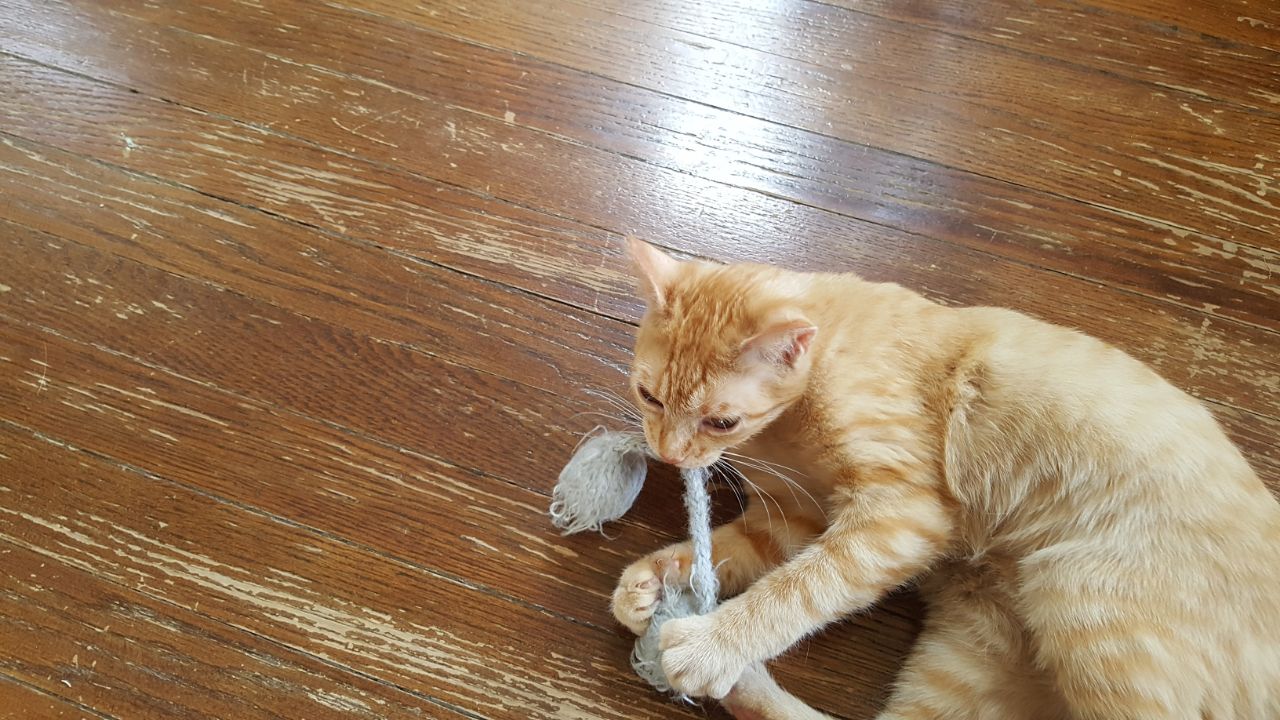 No new books arrived this week, so here is a post about my life under quarantine.

It’s been approximately seven weeks  since Governor Whitmer issued the first of her executive orders to begin the Great Coronavirus Lockdown of 2020. And, it scarcely needs to be said, things are strange.

Two weeks after the lockdown began, my girlfriend sprained her ankle while we were working out. She has been in an air cast for the whole month so far, and due to her limited mobility all of the household chores have fallen in my lap. This wouldn’t be a problem, except I am in the second week of a new project at work which has me working third shift four days a week, 6:00 pm to 6:00 am. This project is projected to run to the end of May, by which time I suspect I will have regressed to being able to communicate only by grunts, gestures, and tactical odors.

I haven’t worked third shift since I was 22, and that nearly killed me. Of course that was assembly line work in a factory, and this is computer work sitting in my home office. But I am 50 now, and sleep, always in somewhat short supply, is suddenly an exceedingly rare commodity.

The Grand Rapids YWCA, where I teach and practice kung fu and tai chi, has been closed down since mid-March. Our senior instructor Rick has put together Zoom classes which are surprisingly well-attended, which is encouraging. I have not been able to attend these classes since (of course!) they take place during my new work hours. I do what I can to practice on my own, and my girlfriend is slowly adding the various exercises to her daily practice as she heals, but so much of class is person-to-person training that I can feel myself growing slower and weaker by the day.

Another casualty of the stay-at-home order is our kitten Poe, who is tired of having humans around all the time, and is deeply confused by having at least one mobile and interactive person around 24 hours a day. Usually she has the nights to herself, but now she can come in and knock over plants in my office into the wee hours of the morning. Our preferred method of discipline is a spray bottle, so Poe spends a not insignificant portion of the day being slightly damp.

I expect that when the extended stay-at-home order expires in three weeks Poe will undergo similar confusion and trauma, except in reverse. She is already showing signs of separation anxiety when we close the bedroom door in order to save our toes from random attacks in the middle of the night. Once Z and I head back to remote work our poor Poe Kitten will be bouncing off the walls. So, a lot like now, but will different subtext. And no audience.

Z and I are cooking a lot more, which is wonderful since Z is a virtuoso and she is keeping us very well-fed. I pitch in when and were I can, mostly breakfast and various snacks. Z is using this as an opportunity to practice her recipes and I have been the eager tester and grateful recipient of the results of her work.

Surprisingly, I have more time to read since so many of the events and responsibilities which take me out of the house are currently on hold. And though the influx of new books has slowed to a trickle I am placing regular orders with our remarkable local independent bookstore Books and Mortar, the owners and employees of which are doing a stellar job of keeping West Michigan supplied with reading material in these uncertain times.

So here we are. Two more weeks of lockdown and five more weeks of third-shift insanity. Z is healing and growing stronger by the day as Poe and I slowly go feral.

The world will look much different in June than it did in March. 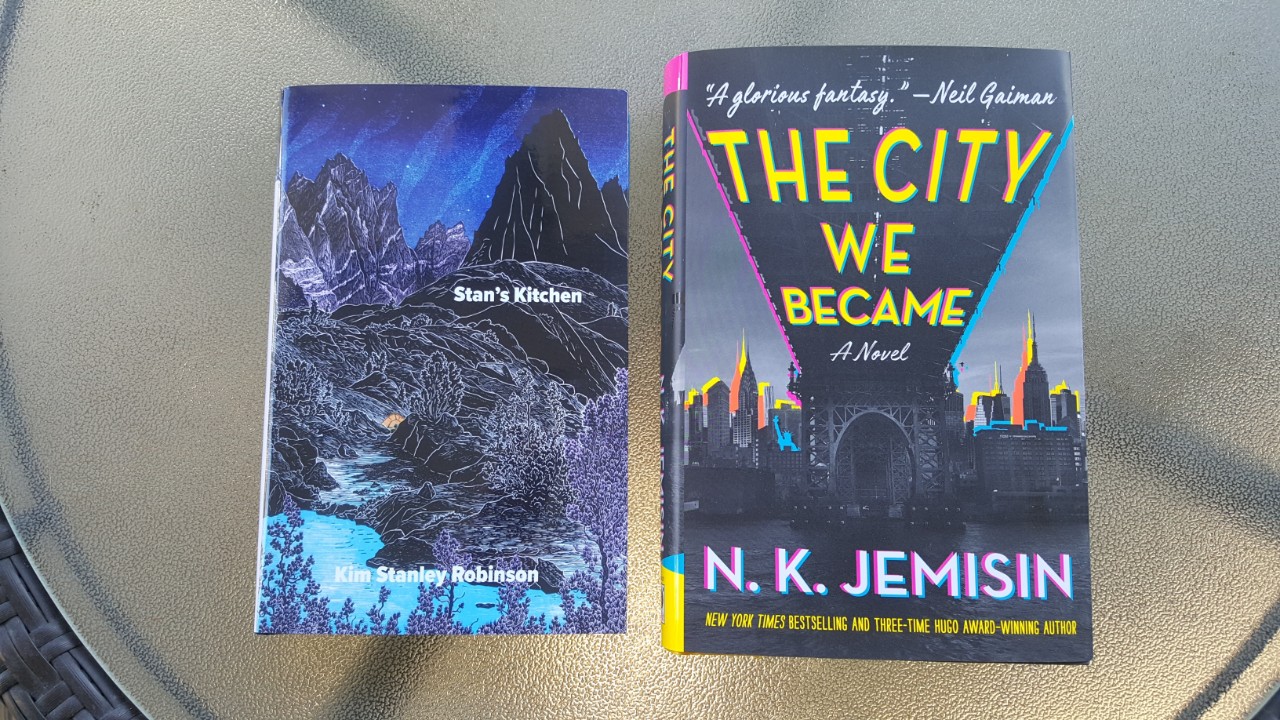 Fortunately for the non-felid cohort here, the books continue to accumulate. On the left is Stan’s Kitchen, a limited edition collection of short works from Kim Stanley Robinson, published by NESFA Press and distributed by Subterranean Press. I was lucky to get one of the very last ones, as after the run sold out (which, as far as I can tell, took about four hours) a few more were added and I was lucky enough to see the notice as soon as it was posted. Thus a new book!

On the right is N.K. Jemisin’s new novel The City We Became, which is about the souls or anthropomorphic personifications of the great cities of the world. I’m about 120 pages in, and this book is magnificent!

On a related note, I feel a sense of, I don’t know, call it kismet, or deja vu, or something of the kind, because during National Novel Writing Month in November 2017 I wrote the first draft of a novel I called Vicarious City, which was about the anthropomorphic personification, the genius loci, of Grand Rapids. And given when The City We Became was released, it is likely that Jemisin was writing her book when I was writing mine. I guess there was a particular energy in the air at the time.

My story was inspired by a few things – issue 51 of Neil Gaiman’s Sandman comic (“A Tale of Two Cities”) , Bruce Sterling’s novel Zeitgeist, Benedict Anderson’s book Imagined Communities, the character Map from the Hellblazer comic, the spirit from Paul Bowles’ short story “The Circular Valley” and the various genii loci from Roger Zelazny and Megan Lindholm’s novel Donnerjack. And in a larger and more subtle sense, this idea as presented by Alan Watts:

Maybe my novel will see the light of day in some form, but in the meantime I am delighted to read Jemisin’s book. She has a presence, and an aesthetic, and a sense of empathy and justice which makes her work compelling and readable in the highest degree.

In other reading news, I finished Ferret Steinmetz’s wonderful The Sol Majestic, and it makes me want to spend the day wandering a food-centric city in his company, talking about cuisines and words and the synchronicities which can be found therein.

I will likely have another post sometime this week, regarding some writing news, but for now, time to prep for work. 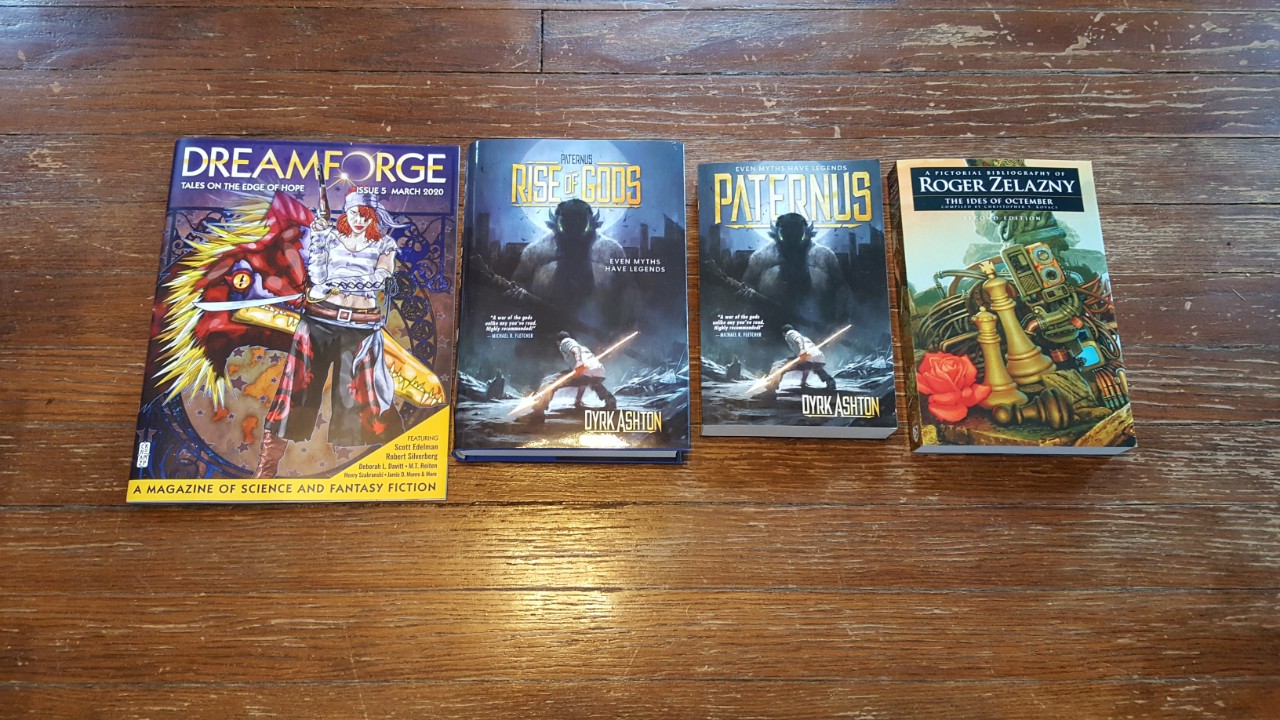 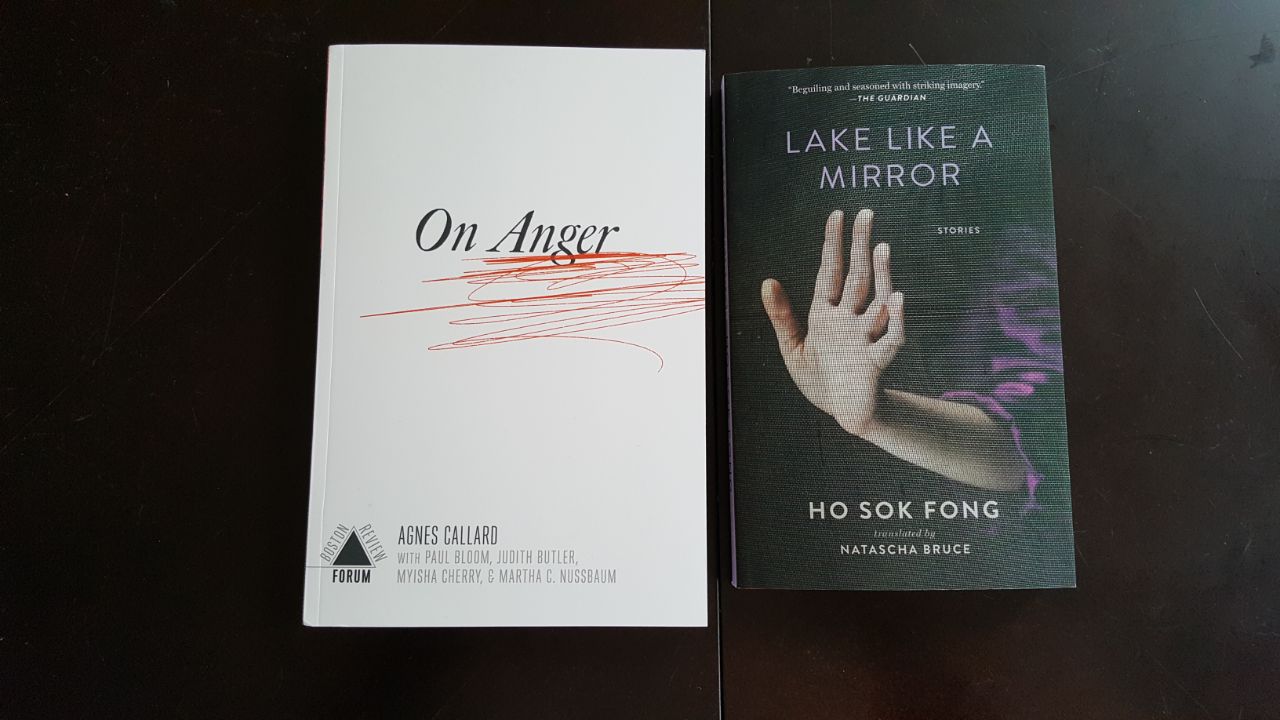 Here at the end of the first week of our quarantine, two books made it over the wall, across the moat, and through the door of Library of Winkelman Abbey.

On the left is the new issue of the Boston Review, and the first of my newly-acquired subscription. They publish some seriously good stuff, and I am looking forward to digging in to this issue. On the right is the latest from Two Lines Press/The Center for the Art of Translation, Lake Like a Mirror, by Ho Sok Fong, which is only the second book from Malaysia in my collection.

I’ve been collecting works in translation for a while now. According to LibraryThing I have 197 books in translation, from 60 countries. The plurality, of course, come from Russia. At some point I may do a post about them, but for now, they serve to help alleviate the slowly growing feeling of isolation and cabin fever.

Poe feels it too. This afternoon my partner and I went for a walk around the neighborhood just to give the cat some alone time. I think she appreciated it.